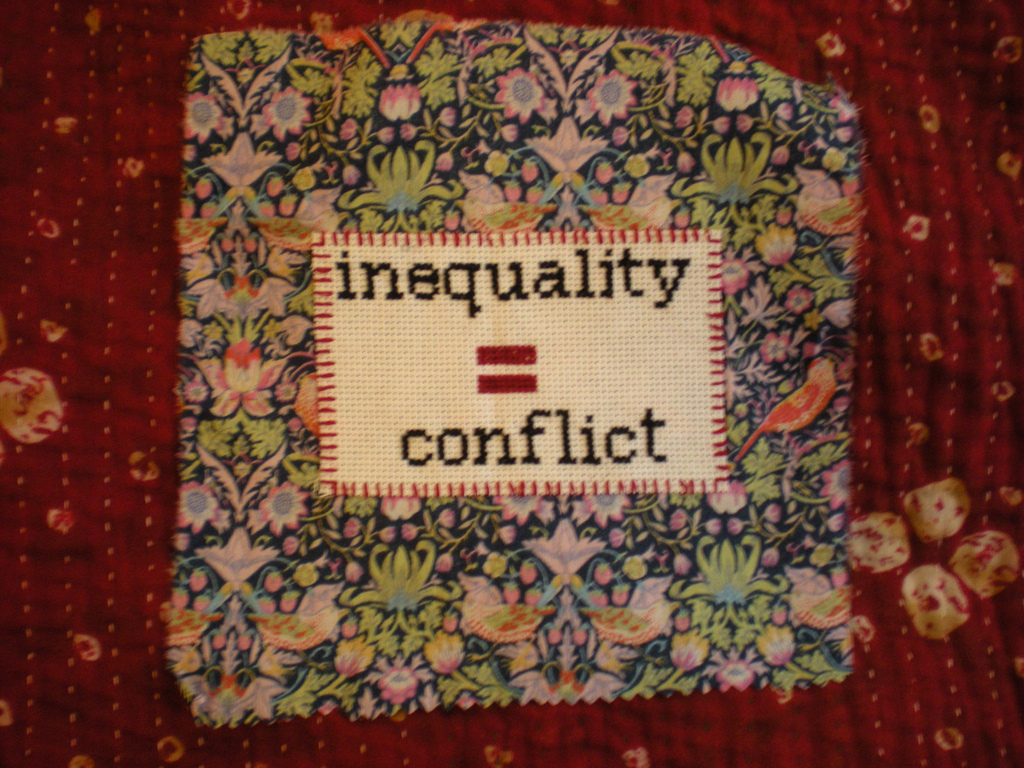 Despite the wealth of scientific evidence that demonstrates how human beings are naturally predisposed to cooperate and share, mainstream economists and politicians still base much of their decision-making on the assumption that people are inherently selfish, competitive and acquisitive.

This one-sided perspective of human nature has defined centuries of aggressive empire building and the politics of domination and control, and it still underpins how societies and nations are organised and the way the global economy functions. The influence of this ideological approach to economics is apparent in the policies of governments on both sides of the political spectrum. The dominant trend in most countries is to overemphasise the role of market forces in shaping society by downsizing the State, rolling back government regulations and encouraging the privatisation of public resources. With the pursuit of economic growth driving policy decisions, social progress is largely dependent on promoting consumerism regardless of the social and environmental costs.

Since the 1980s, a radically different approach to international development took shape under the guise of economic globalisation and ‘structural adjustment’, which aimed to remove all barriers to economic activity between nations and limit government intervention so that market forces can drive the global economy. With increasing vigour over recent decades, almost all governments have pursued policies that favour large-scale corporate activity, debt-fuelled finance, reduced barriers to global trade and increased capital flows between states. As a result, trade between countries remains premised on national self-interest, international competition and a ‘survival of the fittest’ attitude to business that has shifted economic power towards transnational corporations and largely unaccountable global institutions.

The ‘neoliberal’ ideology that institutionalised greed and self-interest may have been discredited by the global financial crisis in 2008, but it continues to dominate policy discourse and practice in both the Global North and the South. Previous economic ideals based on egalitarian values, redistribution and social rights have been replaced by a new ‘common sense’ that takes for granted the supposed naturalness of the market and the primacy of profit-making – assumptions that continue to set the parameters of public discussions and media debates. Commercialisation now permeates almost every aspect of life, and has drawn entire populations into a financialised and marketised view of the world that disinclines a majority of citizens from perceiving an alternative to the status quo.

Sharing as a solution to global crises

Yet the world situation today starkly challenges the vision that expanding the free market and private ownership will create greater economic efficiency and social well-being. The economic freedom promised through the liberalisation of market forces has, in reality, resulted in a freedom for the very few and a contradiction of the core free market promise – that increased wealth will be shared. Our failure to share resources internationally has led to the creation of a global economic system that is inherently unjust, highly unequal and environmentally unsustainable. Humanity is now facing a series of interrelated global crises as a consequence that includes massive poverty and rising levels of inequality, climate change and the ecological crisis in all its dimensions, as well as ongoing conflicts over the world’s dwindling natural resources.

It takes little imagination to see how nations could apply economic sharing as a solution to these critical global issues. In simple terms, a just sharing of the world’s wealth, power and resources is fundamental to bridging the gap between rich and poor countries and meeting basic needs for all. Establishing a new international framework for sharing natural resources more equitably and sustainably (such as land, minerals and fossil fuels) is also essential for safeguarding the environment, ending centuries of inter-state conflict and fostering global solidarity.

From this truly common sense perspective, a new economic paradigm based on sharing rather than competing for the world’s resources presents a pragmatic way forward for the international community in light of the major crises we face. At the same time, it presents a revolutionary challenge to the status quo that necessitates a drastic departure from a prevailing ideology based on economic selfishness, rampant commercialisation and purely materialistic goals.

Report: Financing the global sharing economy, part two: the global emergency
Part 2 of the report Financing the Global Sharing Economy describes in more detail a silent humanitarian emergency that governments should prioritise...
Article: A new economic paradigm: sharing the world’s resources
Share The World's Resources was interviewed on VoiceAmerica talk radio about the reasons for founding the organisation, what economic sharing means, and...
Article: Neoliberalism and economic globalization
The goal of neoliberal economic globalization is the removal of all barriers to commerce, and the privatization of all available resources and services....
Article: A global call for sharing and justice
Protesters in the Arab world have much in common with those reacting to austerity across Europe, as well as the millions who have mobilised in support of...
Printer-friendly version