The path to achieving a truly universal basic income 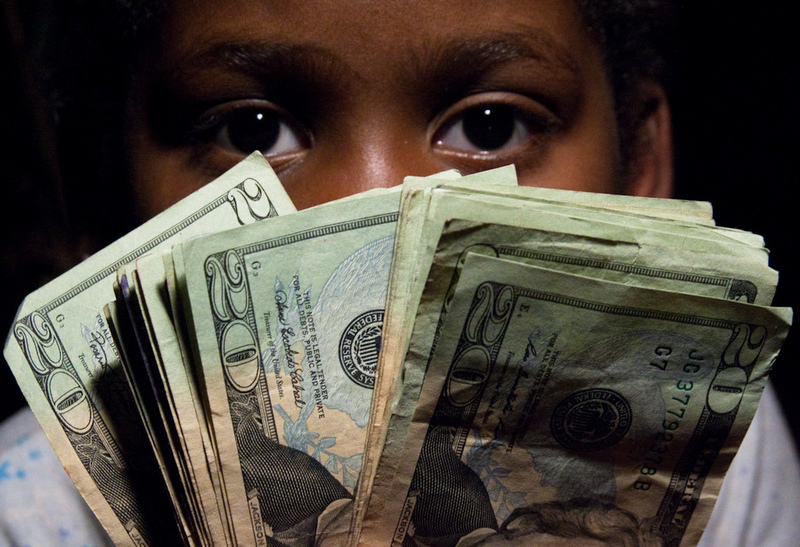 Is it a viable prospect to create a direct mechanism for transferring a universal basic income to all the world’s people? Not before we bring about a huge united voice of ordinary citizens in favour of sharing the world’s resources to end hunger and life-threatening poverty once and for all, argues STWR.

The following article is an edited version of a talk given at the World Basic Income conference held in Salford, UK, in February 2017.

At STWR, we’ve long advocated the importance of sharing in relation to the world’s most pressing problems, from spiralling inequality and global conflict to the sustainability crisis. Yet of all the many groups today that reflect this growing ‘call for sharing’[1] – including the commons movement, the degrowth movement, the social and solidarity economy movement, and the global justice movement in all its diversity – it is the basic income movement that seems to be making the most simple and direct case for collectively sharing the Earth’s wealth. If the land, natural resources, and even our ideas that become ‘intellectual property’ are, in fact, all part of society’s collective treasure, then it is reasonable to argue that every person, merely by being born, is entitled to a share of it. Indeed some of the most compelling arguments for a universal basic income guarantee are about freedom and solidarity: the sense that another world is possible in which our economic system is based on trust and mutual aid, enabling everyone to share in the rewards of technology.[2]

Unfortunately, there is little hope that the full implementation of a basic income - sufficiently high enough to meet all people’s needs without the obligation to work - is going to be achieved in the present context of financial austerity and so-called neoliberal capitalism. As long as present trends continue with the marketisation and gradual deterioration of public services in most countries, any successes achieved in introducing a nation-wide basic income scheme are likely to come at the cost of comprehensive social programs that benefit the majority.[3] This means that any strategy to achieve a UBI has to be part of a transformative project, one that aims to delink work from income and redirect productive capacity towards creating real value for society, while at the same time “switching off the neoliberal privatisation machine” and bringing about a “controlled dissolution of market forces”, as the journalist Paul Mason has argued.[4]

So the question is how to build the huge broad-base of popular support that will be needed to influence public policy in this direction, and there are a number of interesting proposals that suggest a way forward.[5] However, where STWR begins is not with the question of how we, in modern consumerist societies, can ultimately enjoy the freedom and leisure of a post-growth society that equitably shares its machine-produced wealth. Rather, the first question is how the very poorest people in the world, those who lack the basic necessities for a dignified life, can immediately benefit from such redistributive policies.

This is a perspective that STWR has in common with the World Basic Income organisation, who propose to give all citizens $10 a month alongside any existing public services, which could at least provide a survival-level income to ensure no-one dies from poverty.[6] There’s a common-sense appeal to this idea, as it’s obvious that a continued reliance on GDP growth within the existing global economic framework, coupled with insufficient donations of international aid, is not a viable route to ending poverty in every country by 2030, or at any other date.[7]

But is it a viable prospect to create a direct mechanism for transferring a social dividend of some variety to all the world’s people in the immediate term? There are certainly many innovative proposals for how to fund such a global scheme, from global taxes on currency transactions, CO2 emissions and other common resources, to the idea of a fair worldwide distribution of tradeable pollution rights.[8] Theoretically, there’s no reason why governments could not create an international model of economic sharing that distributes a proportion of global resource rents to all citizens, providing a truly universal basic income as well as an indispensable source of finance for underfunded global governance bodies, such as the United Nations and its affiliated agencies.[9]

The problem, of course, is that we’re still nowhere near to achieving the level of international consensus and intergovernmental cooperation that would be needed to actuate these ideas. We’ve now seen the difficulty involved in implementing even a European-wide Financial Transaction Tax, let alone the prospect of building some kind of global welfare state, or a world public revenue based on sharing the value of co-owned resources.[10] The state of Alaska is still the only political unit to have introduced a genuine basic income scheme across an entire society, and even if a worldwide basic income could one day be achieved, it is more likely to come as a supplement to a basic income already funded at a national or regional level. And even then, it will only come if a large number of more localised projects first prove that a universal scheme is politically feasible, and implementation difficulties can be overcome.[11]

The various pilot projects in developing countries like Namibia and India have shown the transformative potential of such schemes[12] - but still millions of people are left out and fail to receive adequate government assistance for their essential needs. The UN’s International Labour Organisation estimates that the majority of people in the world continue to lack a comprehensive set of social protection guarantees – more than 70 percent of the global population.[13] Indeed contrary to the ‘good news’ narrative that is propagated by the World Bank, there are in fact more than 4 billion people who live in conditions of extreme poverty today, if we use a more realistic international poverty line of around $5 a day.[14] Global hunger figures are also inaccurate and probably vastly underestimated, and could include upwards of 2 billion people.[15] Unbelievably, around 17 million people continue to die each year as a consequence of extreme poverty and inadequate welfare provision, equivalent to around 46,000 people each day.[16]

Suffice to say that most of these people cannot wait in the vain hope that a universal basic income will deliver them from destitution any time soon. The dire reality of life-threatening poverty can only be described as a global emergency, and it is high time that governments and civil society treated it accordingly. Yet not since the Brandt Report in 1980 has there been a high-level intergovernmental proposal for an emergency programme of humanitarian relief to prevent extreme deprivation and avoidable poverty-related deaths, regardless of where it occurs in the world.[17] As Willy Brandt envisioned, such a programme needs to be agreed through the United Nations and implemented in the shortest possible timeframe, requiring an unprecedented mobilisation of international agencies and massive transfers of resources to the world’s poorest regions, over and above existing aid budgets.[18]

This is clearly not about to happen in the midst of a global economic downturn and refugee crisis that is polarising our societies, and it may never happen unless there is an extraordinary show of public support that can persuade governments to reorder their priorities on behalf of the marginalised poor. For this reason, at STWR we believe that our foremost concern should not only be to promote the necessary pro-poor and redistributive policy changes that are urgently needed in the world. More importantly, we also need to bring about a compassionate awareness among the wider public of the dire reality of extreme poverty, as well as a huge level of civic engagement around this critical issue.

Our flagship publication titled Heralding Article 25 by STWR’s founder, Mohammed Mesbahi, examines this dilemma from many angles, and proposes a simple strategy for transforming the world through a unified call for sharing global resources.[19] The book makes an impassioned case for huge, continuous and worldwide demonstrations that mobilise around the long-agreed human rights of Article 25 of the Universal Declaration of Human Rights – for adequate food, housing, healthcare and social security for all – until governments are impelled to organise an emergency programme of resource redistribution through the United Nations.

It requires a careful reading of the book’s rationale to appreciate the remarkable possibilities of heralding Article 25, although it’s important to state that the case it makes is not only a moral one, but also strategic. Because if we can envision enormous, endless protests in every country that peacefully amass for the cause of ending absolute poverty wherever it exists, then it’s possible to foresee the kind of changes that would ensue in international relations. Over time, it is through the necessary reforms to the global economic architecture that many other causes long upheld by progressive campaigners may finally become viable: closing down tax havens, diverting military expenditures, abolishing the unjust debts owed by developing countries, rolling back the tide of secretive free trade agreements, putting an end to structural adjustment programmes across the Global South… In other words, only after an immense release of empathic concern towards the plight of the world’s forgotten and impoverished millions, can we anticipate the declaration of human solidarity that is necessary to roll out universal basic income schemes across the world, and so much more.

Many questions remain as to how we can realise such a persistent expression of massed goodwill through global demonstrations, and the above perspective only provides a brief overview of our advocacy position at STWR. None of this is to suggest that the idea of a universal basic income does not hold potential to build a counter-hegemonic strategy based on a new vision of a world that shares its wealth more equitably, enabling everyone to live freer and more creative lives. However, what many of these inspiring visions fail to account for is the importance of a crucial and yet absent actor on the world stage – namely a united voice of ordinary people, fused and directed towards the suffering of the very poorest members of the human family. This is what Mohammed Mesbahi describes as the “missing part” in global activism and new economic thinking, and without an overarching populist demand for a fairer sharing of resources on the global level, it will arguably be impossible to bring about the large-scale transformations of society that progressives movements are everywhere fighting for.

Put simply, the vision of granting every human being an equal right to share in the benefits of technological progress is noble and extremely encouraging. But we’re putting the cart before the horse if we expect that vision to be fulfilled in every country, before we have yet realised a massive global outpouring of goodwill towards the urgent cause of abolishing hunger and malnutrition through the elimination of absolute poverty.

[3] Nick Dowson, Why a basic income could be a gift to the Right, New Internationalist, November 2016; Francine Mestrum, Social protection and basic income: competitors or allies?, July 2014.

[9] There are various proposals for how to fund a basic income on a global level from writers such as Alanna Hartzog, Myron J. Frankman, Peter Kooistra, James Robertson, Thomas Pogge, FEASTA and others.

[12] Guy Standing, 'Why basic income's emancipatory value exceeds its monetary value', Basic Income Studies, 10 (2). pp. 193-223; Ralph Callebert, 'What is a universal basic income – and how could it lift millions out of poverty?', Independent, 8th March 2016.

[14] According to the World Bank's PovcalNet website, 4.182 billion people lived below PPP$5/day in 2011. See also The Rules campaign on 'The story of poverty', www.therules.org/campaign/the-story-of-poverty/

[16] See figures in STWR, Beyond the Sustainable Development Goals: Uncovering the truth about global poverty and demanding the universal realisation of Article 25, September 2015.

[17] The Report of the Independent Commission on International Development Issues under the Chairmanship of Willy Brandt, North-South: A programme for survival, Pan books, 1980.