If America can find $716bn for the military, it can fund the Green New Deal 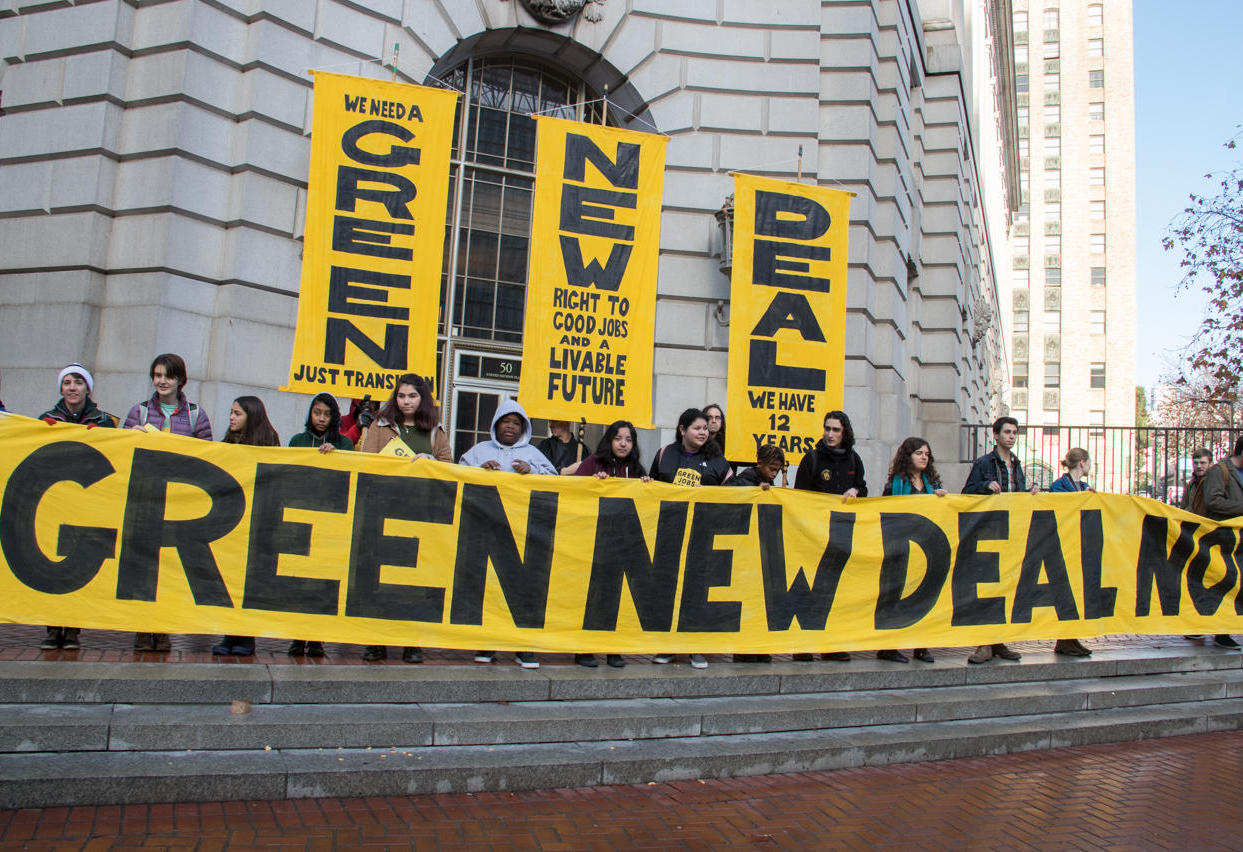 At long last the political debate in the world’s richest country is vibrant with proposals that would help the most vulnerable in our society. And what do we hear in response? A growing chorus of naysayers.

“Just pipe dreams” – that’s how the Washington Post columnist Robert Samuelson referred to proposals for guaranteed jobs, Medicare for All, universal childcare, and the Green New Deal. Like many other pundits and politicians, Samuelson says we can’t afford such luxuries. Taxing the rich wouldn’t raise enough money. We’d have no choice but to resort to deficit spending.

Funny how some politicians have no qualms about ballooning the deficit with tax cuts for the rich but balk at investing in the long-term health of our people and communities. Just as peculiar: the fact that military spending cuts are virtually never mentioned as an option for freeing up funds for social good instead of war.

This year the US military budget is $716bn – and boy is it ripe for slashing. That military budget represents about 53 cents of every discretionary dollar in the federal budget – and it’s one of the biggest reasons that people so often throw up their hands and shake their heads when they think about funding innovative ways to end poverty.

They don’t need to throw up their hands, though. The politicians and pundits should just start listening to children. When young organizers from the Sunrise Movement recently challenged Senator Dianne Feinstein to support a Green New Deal, she told them “there’s no money to pay for it”. She probably didn’t expect those eight- and 10- and 11-year-old kids to respond immediately: “Yes, there is, there’s tons of money going to the military.”

Feinstein responded condescendingly that the military does “important things” with that money. Our never-ending wars say otherwise. Last year saw the highest number of civilians killed in the Afghanistan war since the UN began keeping track – more than 3,800 people, 930 of them children. About a quarter of them were killed by US and Nato troops and their Afghan government allies – and most of those by US-Nato airstrikes and drone attacks. Thousands more were injured.

Committing such mayhem doesn’t come cheap. Last year alone, the war in Afghanistan, in its 17th year, cost about $45bn. And that’s just the immediate cost of fighting the war – it doesn’t include the costs of caring for injured US soldiers, let alone Afghan victims. It doesn’t include training more soldiers to replace the ones occupying Afghanistan now, or the enormous sums spent on the base Pentagon budget.

Most importantly, the war in Afghanistan hasn’t made us any safer, and isn’t making life better for the people of Afghanistan. (To take one grim measure, at the start of the war, Afghan babies faced the fourth-highest levels of infant mortality of any children in the world. Today, after almost 18 years of US war, Afghanistan is No 1.)

And those soldiers that have come back from the wars in Afghanistan, Iraq, and beyond? They still aren’t getting the care they need. They still struggle to access Veterans Administration clinics and hospitals, and they’re still killing themselves at rates advocates deem a “national emergency”. According to the VA itself, the Guardian reports, veterans aged 18-34, many of whom served in Iraq and Afghanistan, have “higher rates of suicide than any other age group”.

The human toll of these wars is staggering. And the financial costs are breathtaking. Neta Crawford, who co-directs the Cost of Wars Project at Brown University, estimated back in 2017 that total war spending in just Iraq, Afghanistan, and Pakistan was approaching $5tn since 2001. When we’re talking about trillions of dollars – $2tn for Afghanistan and another $3tn or so for Iraq and beyond, Crawford calculates – it means there’s plenty of money to fund things that really do keep our people and our country safe.

For just a quarter of that $2tn we’ve spent on a fruitless, brutal war in Afghanistan, the National Priorities Project at the Institute for Policy Studiescalculates we could instead fund more than 103,000 elementary school teachers, 112,000 clean energy jobs, 935,000 Head Start slots, and healthcare for 806,000 veterans and more than 2.3 million adults, and retrofit nearly 5.8m houses for solar electricity.

In fact, we could do all of that every year for 10 years. Compared to all this, paying trillions for war isn’t an investment – it’s just a loss. It’s loss at a scale that, if it were reversed, would make a Green New Deal, Medicare for All, and all the rest perfectly realistic.

Which would make us safer?

William J Barber II is president of Repairers of the Breach and co-chair of the Poor People’s Campaign. Phyllis Bennis is a fellow of the Institute for Policy Studies