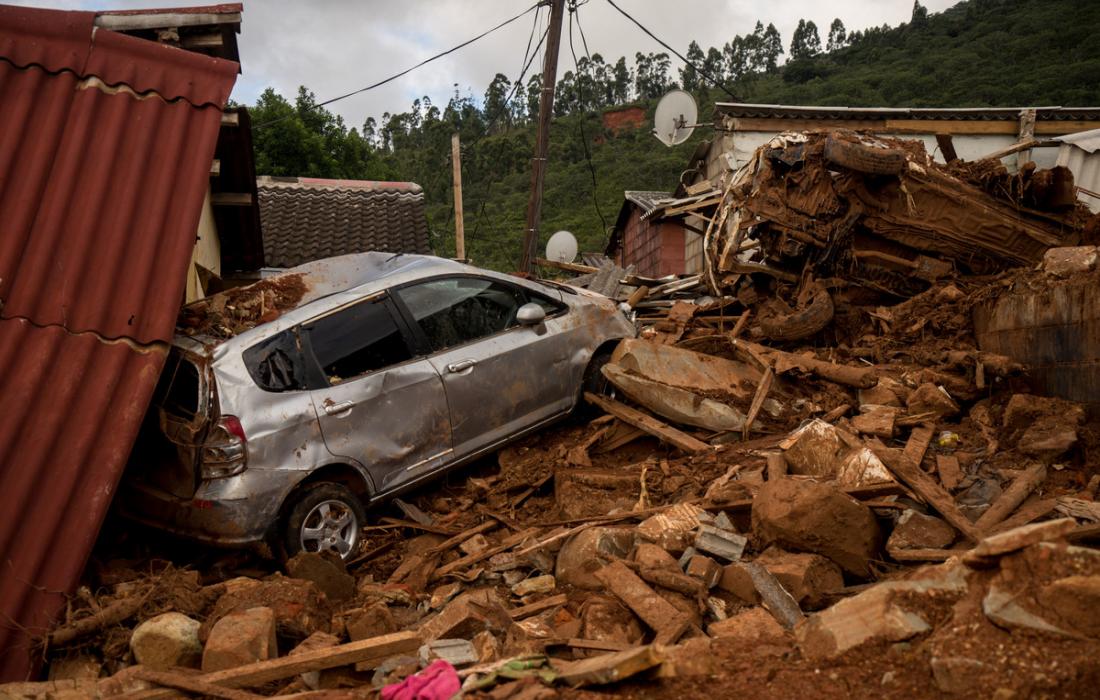 New analysis sets out how much responsibility the wealthy countries behind the climate crisis must take for the devastating impact that rising global temperatures are already having on developing nations.

The report, Can Climate Change-Fuelled Loss and Damage Ever Be Fair?, endorsed by nearly 100 civil society organisations finds that the US and EU are jointly responsible for more than half (54%) the cost of repairing the damage caused by climate disasters in the Global South.

It highlights how the world needs to establish effective responses to climate disasters, remake global food systems to be resilient in the face of destabilised ecosystems, and respond to increasingly frequent migrant crises in ways that protect the rights of those forced to leave their homes.

The report shows that the first step is for wealthy countries to immediately begin providing public climate finance, based on their responsibility and capacity to act, to support not only adaptation, but to also address the loss and damage already being caused by the climate crisis.

It is being released ahead of the 25th Conference of the Parties to the UN Framework Convention on Climate Change (COP25) in Madrid next week, where there is an urgent need for governments to agree ways to provide climate finance, including through new and innovative sources such as taxes on fossil fuels and financial transactions, which can deliver resources at scale to countries on the frontline of the climate crisis.

The civil society organisations calculated countries’ ‘fair share’ of responsibility using an equity analysis, based on historic contributions to climate change through greenhouse gas (GHG) emissions, and their capacity to take climate action, based on national income while taking into account what is needed to provide basic living standards.

Considering countries’ responsibility for the climate crisis and their financial capacity to respond, the report estimates that the US owes at least 30% and the EU 24%, compared to India’s 0.5%.

The report suggests that, based on estimates of loss and damage costs in developing countries, new and additional finance of $50 billion should be provided by 2022, rising to a minimum of $300 billion by 2030.

Developing countries are already bearing the brunt of the human and environmental costs of climate change. Mozambique is among countries across southern Africa currently experiencing a food crisis affecting 45 million people. Earlier this year, communities were hit by an unprecedented two cyclones, Idai and Kenneth, which killed 648 people, displaced millions, and destroyed homes, infrastructure and crops, causing $3 billion in damages.

Harjeet Singh, global lead on climate change for ActionAid, says: “The climate emergency is the greatest equity challenge of our time. The current, unjust system for responding to climate disasters is pushing developing countries further into poverty and debt.

“The issue of finance for repairing the loss and damage caused by climate change is on the table at COP25. This research clearly shows how much is owed and by whom. This is a crucial opportunity for the rich countries and polluting industries that have caused the crisis to meet their responsibility to those who are being hardest hit by climate disasters.”

Sandeep Chamling Rai, senior advisor on global climate adaptation policy for WWF, says: “People’s fight for justice – in their political, social and economic lives – has moved centre-stage, in parallel with the fight against the climate crisis. These struggles are fuelled by rising inequality, poverty and the impacts of climate change on the poorest and most marginalised communities and vulnerable ecosystems around the world. We have little time to respond to the rising demands of people.

“If we are to avert chaos, rich countries must prioritise funding for loss and damage. One way to focus efforts would be to enhance nature-based solutions, thereby minimising future loss and damage while also addressing the climate crisis.”

Nafkote Dabi, climate change policy lead for Oxfam, says: “Climate fuelled disasters are devastating the lives of some of the poorest people across the globe – people who have done least to fuel this crisis are losing their homes, their food, and their livelihoods. Rich countries must adopt ambitious emissions reductions plan to minimize the impact of the crisis and contribute their fair share to support frontline communities adapt and recover from loss and damage.”

Alison Doig, head of global policy, Christian Aid, says: “We can no-longer  pretend that the climate emergency is something for the future, that we can all adapt to or insure against. Poor and vulnerable people are losing their homes, livelihoods and loved ones right now, due to drowning Pacific Island, extreme weather in southern Africa and Central America, monsoon flooding in India, and slow progressing drought in East Africa. For them it is too late to adapt, and costly insurance mechanisms have failed to replace their loss.

“We need to face the reality in front of us, and provide funding to repair the damage and replace the loss caused by the  climate emergency.”

Sven Harmeling, global policy lead climate change and resilience, CARE International, says: “Millions of people around the world are already ravaged by a climate crisis they didn’t cause. From Africa and Asia to Europe and the Americas, this burden falls disproportionately on the poorest and most vulnerable, particularly women and girls. Ramping up finance to reduce climate impacts and to recover from those unavoided is overdue. COP25 must become the moment where rich countries shift the scales of justice towards the climate-harmed people.”

Dipti Bhatnagar, climate justice and energy coordinator, Friends of the Earth International, Mozambique, says: “Our country Mozambique didn’t create the climate crisis, yet some of our poorest and most vulnerable citizens were devastated by the cyclones that hit earlier this year. The climate crisis is inherently unjust. This is why we need rich countries to stop emitting now, but they must also provide essential funding for loss and damage. We need a repayment of the climate debt that must flow to southern governments who must be accountable to their people to deal with the climate crisis.”

Isaiah Toroitich, head of policy and advocacy, ACT Alliance, says: “Unchecked climate change is running rampant and certain developing countries and climate-vulnerable communities are being hit the hardest. It’s incumbent on developed countries to play their part in radically confronting the climate crisis and to make support available to the most vulnerable people. Failing to do so, will demonstrate a lack of solidarity with front-line communities and the life-threatening realities that they face as climate change intensifies.

News: New STWR book: The spiritual dimensions of a climate emergency
STWR have published a book version of the popular dialogue with Mohammed Sofiane Mesbahi, titled ‘The intersection of politics and spirituality in...
Report: Equity and the ambition ratchet
Share The World's Resources is one of many signatories to the latest Civil Society Equity Review, which proposes a policy framework for a fair sharing of...
News: Step up climate action or face catastrophe, says UN report
Global emissions need to be more than halved if we are to save the planet, world's top scientists agree in a new United Nations report.
Blog: Can an unequal earth beat climate change?
Limiting global warming to 1.5°C will require major disruptive shifts, which people will tolerate only if they believe that everyone is sharing in the...
Article: Global inequality in a time of climate emergency
Every national campaign for tackling climate change also needs an international justice plank, because we’re not going to get anywhere near the Paris...
Report: Cooperation key to solving climate crisis
A new report from a diverse coalition of civil society organisations reveals what governments must do immediately to achieve goals of Paris Agreement,...
Printer-friendly version