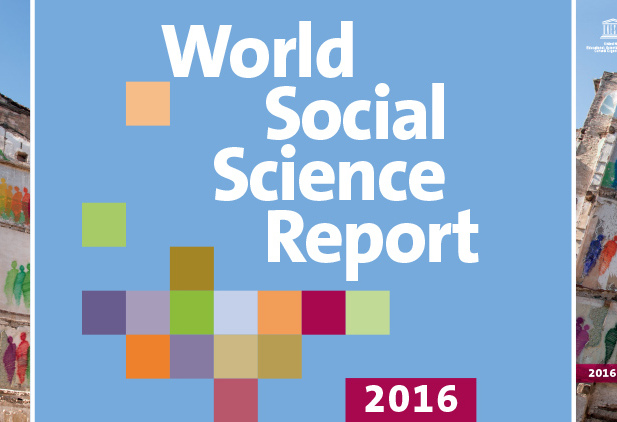 The coexistence of deep and persistent inequalities as well as increasing prosperity is a paradox of our time, a paradox that calls into question global development and processes of modernization in today’s world. The latest World Social Science Report for 2016 includes a compendium of knowledge from relevant experts on this immense challenge of the 21st century, with a concluding section on transformative pathways to a just world.

A new report warns that unchecked inequalities could jeopardize the sustainability of economies, societies and communities, undermining efforts to achieve the Sustainable Development Goals (SDGs) by 2030.

The World Social Science Report 2016, Challenging Inequalities – Pathways to a Just World, highlights significant gaps in social science data about inequalities in different parts of the world and, to support progress towards more inclusive societies, calls for more robust research into the links between economic inequalities and disparities in areas such as gender, education and health.

The World Social Science Report features contributions from more than 100 experts. It was overseen by a scientific advisory committee of leading academics from all regions that included economics Nobel Prize laureate Joseph Stiglitz. The report has been prepared by the International Social Science Council (ISSC) in cooperation with the Institute of Development Studies (UK). It is co-published by UNESCO.

“The issue of rising inequality and what to do about it looms large in the minds of governments, businesses, civil society leaders and citizens around the world. Reducing inequality is, first and foremost, a question of fairness and social justice. It is also key to eradicating extreme poverty, fostering transformations to sustainability, promoting civil progress, reducing conflict and violence, and developing inclusive governance,” the report says.

While there was a fivefold increase in studies of inequalities and social justice in academic publications from 1992-2013, many studies pay too little attention to inequalities that go beyond income and wealth, such as health, education and gender, according to the report. It identifies seven intersecting dimensions of inequality: economic, political, social, cultural, environmental, spatial * and knowledge-based *. Closely linked, they create vicious circles of inequality that are handed down from one generation to the next.

“This report is a wake-up call. Closing the gap in social science research into inequalities is vital to achieving the cross-cutting ambition of Agenda 2030 for transformations that ‘leave no one behind’,” said the Director-General of UNESCO, Irina Bokova.

“We need more long-term and robust social science research into inequalities that continue to undermine our capacity to address other global priorities. We need to see a step change towards a research agenda that is interdisciplinary, multiscale and globally inclusive,” said Mathieu Denis, Executive Director of the ISSC.

The report highlights that the focus of social science research into inequalities tends to be in developed countries for which reliable data exists, whereas developing countries do not have similarly reliable data. North America and Western Europe accounted for more than 80% of social and human science publications on inequalities and social justice from 1992 to 2013 (including research by economists, psychologists and sociologists). Sub-Saharan Africa and Latin America only contributed 3% and 2% respectively, according to the report.

Research into rising inequalities has shown that almost half the world’s household wealth was owned by 1% of the population and that the 62 richest individuals owned as much wealth as the poorest half of humanity.

The United Nations’ 193 Member States adopted 17 Sustainable Development Goals (SDGs) in September 2015, an ambitious global undertaking to end poverty, address inequalities and tackle climate change over the next 15 years. The SDGs, which replaced the Millennium Development Goals (MDGs), aim to improve lives, committing both rich and poor countries to achieve a series of interconnected goals, including the reduction of inequality.

Article: Global inequality
A brief analysis of inequality around the world, it's possible causes and consequences.
Page: Global poverty and inequality
World leaders may suggest that a great deal is being done already to prevent extreme deprivation, but this is far from the reality. Unless governments...
Article: Connecting the dots: Human rights, inequality and poverty
We can rapidly realise the human rights of the world’s poor through global institutional reforms that reduce inequality and share the planet's natural...
Printer-friendly version