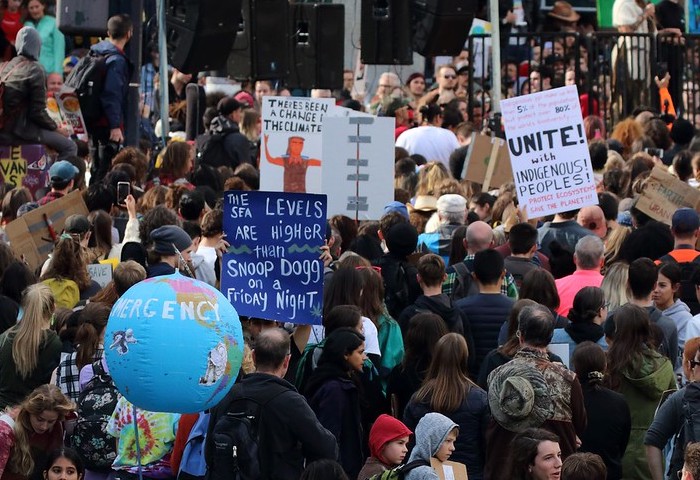 Despite years of warnings, the threats are underestimated and not broadly understood, and efforts to head them off are hamstrung because many governments are captured by wealthy elites protecting their own short-term interests, they added.

“The scale of the threats to the biosphere and its life forms - including humanity - is so great that it is difficult to grasp even for well-informed experts,” the 17 scientists wrote in an article in the journal Frontiers in Conservation Science.

The dangers include agricultural collapses that could create widespread hunger, large-scale forced migration as people flee uninhabitable conditions and a rise in right-wing populist governments that make addressing the threats harder, they said.

“COVID and the rise of nationalistic leaders show us our perceived security is much more tenuous than we thought,” said co-author Daniel Blumstein, a biologist at the University of California, Los Angeles.

Despite efforts to spur action to protect the climate and biodiversity, “we see all of these indicators going in the wrong direction”, he told the Thomson Reuters Foundation.

The journal article cites more than 150 scientific papers detailing the perils, but notes these have gained little traction, particularly in a global economy built around unsustainable pillars of perpetual growth and short-term gain.

With damage to the climate and nature not yet factored into economic decision-making, “we’re living in an ecological Ponzi scheme” that steals from future generations, Blumstein said.

That, combined with population growth and skyrocketing consumption of resources, as more people around the world enter the middle class, means environmental threats to humanity are accelerating far faster than even scientists expected.

“For the first time ever in the history of the world, the wants of very few can have massive consequences for the viability of the Earth and humanity,” Blumstein said.

“The problems we’re facing now are civilization killers and humanity killers,” he warned.

Contributors to the report included ecologists, biologists and sustainability experts from the United States, Australia and Mexico, including Paul Ehrlich, a retired Stanford University biologist who wrote the controversial 1960s book “The Population Bomb”.

“The biodiversity threat is underestimated and people don’t understand how tied they are to it,” particularly in terms of the consequences for global food production, Ehrlich said.

With successful agriculture highly dependent on a stable climate, “people are not paying serious attention to that at the level they ought to”, he told the Thomson Reuters Foundation.

The scientists said the widespread view that fundamental economic shifts, away from fossil fuels and toward curbing excessive consumption, are too expensive does not adequately take into account the costs of not making those shifts.

Over-consumption and destruction of nature and the climate will inevitably end, they said - the question is whether that happens “by design or by disaster”.

With authoritarianism, extreme weather, wildfires, hunger and environmental destruction already surging around the world, the fear is the second route is becoming more likely, they said.

“We’re seeing the beginning of the crumbling of our civilization - and it’s really scary,” Ehrlich noted.

Taking effective action to head off the threats is growing harder as they become more acute and the measures needed to address them more extreme, the scientists said.

“The severity of the commitments required for any country to achieve meaningful reductions in consumption and emissions will inevitably lead to public backlash and further ideological entrenchments,” they warned.

Political divisions will in turn limit “the capacity of making prudent, long-term decisions” and countries’ ability to come together to solve urgent global problems, they added.

“The political situation we’re in now is largely driven by inequality, where the rich get what they want,” he said.

“We are not investing in a future that will lead to the greatest good for the greatest number. We need to inspire massive political change - bottom-up change,” he said.

Underestimating the Challenges of Avoiding a Ghastly Future - Frontiers in Conservation Science, 13 January 2021

Blog: Achieving social justice on an overpopulated planet
Only through a peaceful mass movement on a global scale, putting the needs of the poorest first and foremost, will we finally set foot on the road to a...
Article: Is it possible for everyone to live a good life within our planet’s limits?
Although wealthy nations like the US and UK satisfy the basic needs of their citizens, they do so at a level of resource use that is far beyond what is...
Blog: Climate change: 12 years to save the planet? Make that 18 months
Current plans to cut global carbon emissions are nowhere near strong enough to keep temperatures below the so-called safe limit - and 2020 is a deadline...
Blog: COP fails to rise to the challenge of protecting biodiversity
The latest talks of the Convention on Biological Diversity in Cancun, Mexico, failed to address the systemic factors that threaten biodiversity, or the...
News: Civil society demands action on biodiversity loss
The world is facing a biodiversity crisis, and leaders and delegates of the Convention on Biological Diversity must take real action to halt the...
Blog: Greta Thunberg’s speech to UN secretary general António Guterres
In a speech given at the UN Climate Change Conference in Poland (COP24), 15-year-old Greta Thunberg cuts to the heart of the challenge and calls for the...
Printer-friendly version