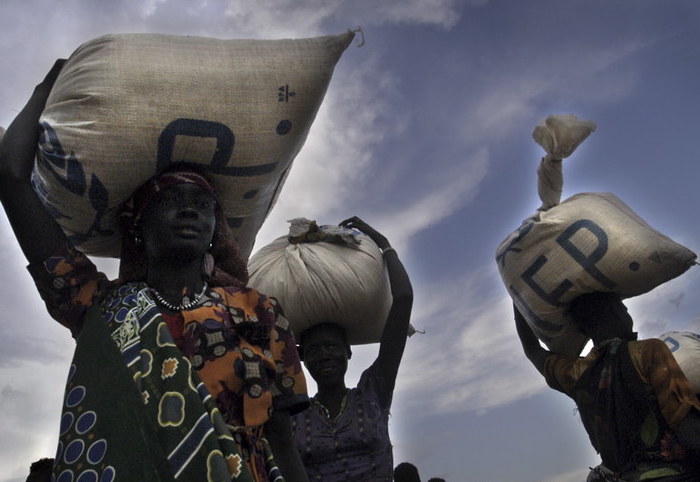 The Nobel prize for the United Nations World Food Programme turns an important spotlight on the millions who go hungry around the world and on the devastating consequences of conflict.

The World Food Program was awarded the Nobel Peace Prize on Friday for its efforts to combat a surge in global hunger amid the coronavirus pandemic, which has swept around the world with devastating impact.

The Nobel committee said that work by the organization, a United Nations agency, to address hunger had laid the foundations for peace in nations ravaged by war.

“In the face of the pandemic, the World Food Program has demonstrated an impressive ability to intensify its efforts,” Berit Reiss-Andersen, the chair of the Norwegian Nobel Committee, said as she announced the prize in Oslo. “The combination of violent conflict and the pandemic has led to a dramatic rise in the number of people living on the brink of starvation,” she added.

In many nations, particularly those at war, the combination of conflict and the pandemic has sharply increased the number of people on the brink of starvation. As the global fallout from the pandemic began this spring, the World Food Program estimated that the number of people experiencing life-threatening levels of food insecurity could more than double this year, to 265 million.

The Nobel committee’s recognition of a United Nations agency comes as the United States under President Trump has very publicly pulled back support for the global organization.

Since he took office in 2017, the United States has withdrawn from several United Nations bodies and slashed funding for others, although World Food Program contributions have increased. Mr. Trump has contended that the United States is shouldering an outsized financial responsibility for the global body as compared with other countries.

In the spring, Mr. Trump halted funding to the World Health Organization, a U.N. agency that has been coordinating the global response to the pandemic.

The World Food Program, established in 1961 after a proposal by President Dwight D. Eisenhower, has been a major behind-the-scenes player helping people affected by some of the world’s most devastating humanitarian disasters, including famine in Ethiopia in the 1980s, wars in Yugoslavia in the 1990s, the 2004 Asian tsunami and the 2010 Haiti earthquake.

Several United Nations and World Food Program leaders mentioned in their responses to the Nobel Peace Prize that the program depended on voluntary funding to be able to carry out its work.

The organization has long faced problems funding some of its largest operations, such as in South Sudan, where seasonal rains and conflict have disrupted food availability for as long as the program has existed. Most recently, it began a campaign to fund its Yemen operations, where a yearslong conflict has led to the world’s worst humanitarian crisis.

“The world is in danger of experiencing a hunger crisis of inconceivable proportions if the World Food Program and other food assistance organizations do not receive the financial support they have requested,” the Nobel committee said.

The Nobel Peace Prize comes with a cash award of 10 million Swedish kroners, about $1.1 million.

Yet the agency has met with criticism that its food sourcing methods hamper already weak local food markets. The organization buys most supplies on the global market, and development experts have criticized it for offering contracts to major donors — like the United States — in what has come to be known as “tied aid,” or the practice of tying humanitarian donations to purchasing contracts. In response, it has pledged to eventually 10 percent of its supplies from smaller local farms.

Its employees have at times also been accused by investigators, journalists and local groups of malpractice, such as stealing and selling food that is meant to be distributed for free. In a major operation in Uganda last year where the organization tried to feed thousands of refugees, four died and hundreds became sick, leading to internal investigations.

The program’s workers also risk their lives to carry out the program’s mission, however, and several lost their lives — sacrifices that António Guterres, the United Nations secretary general, noted after the award was announced.

“The women and men of the W.F.P. brave danger and distance to deliver lifesaving sustenance to those devastated by conflict, to people suffering because of disaster, to children and families uncertain about their next meal,” he said in a statement on Friday.

Mr. Guterres also said there was “a hunger in our world for international cooperation,” noting that the program relies on contributions from U.N. member states and the public.

One of the program’s key messages is that, in most cases hunger is the result of human actions rather than nature’s whims. Yemen is a case in point: Food exists, but hyperinflation and conflict make it practically unavailable to those who need it most, including children.

In a telephone interview, David Beasley, the program’s executive director, said the prize had turned an important spotlight on the millions who go hungry around the world and on the devastating consequences of conflict.

“It’s the first time in my life I’m speechless,” he said, adding that it was both wonderful and bad news to receive, because it highlighted not only the work being done, but also the depth of the need for it.

Mr. Beasley said it was an “indictment of humanity” that anyone could want for food “in a time when there is so much wealth in the world.”

“It’s a call to action,” he said of the prize. “The world is suffering more than in any time period, and we literally will be facing famines of biblical proportions if we don’t act.”

News: Extreme poverty to rise for first time in more than 20 years due to COVID-19, World Bank warns
Global poverty is expected to rise for the first time in more than 20 years this year as the pandemic compounds the impacts of conflicts and climate...
Blog: Civil society call for a global fund for social protection
Over 200 civil society organizations and trade unions unite to call for a Global Fund for Social Protection to protect the most vulnerable during COVID-19...
Article: Global cooperation tested by the pandemic at UNGA 75
The 75th UNGA is a moment for the world to focus on realising the full potential of the United Nations' founding principle of "achieving international...
Report: Global efforts to minimize poverty amid COVID-19 are 'full of holes': UN expert
Current social protection programs are not enough to stop millions of people falling into poverty during the COVID-19 pandemic, according to the UN...
News: First famines of coronavirus era are at world’s doorstep, U.N. warns
The first famines of the coronavirus era could soon hit four chronically food-deprived conflict areas — Yemen, South Sudan, northeast Nigeria and the...
Printer-friendly version