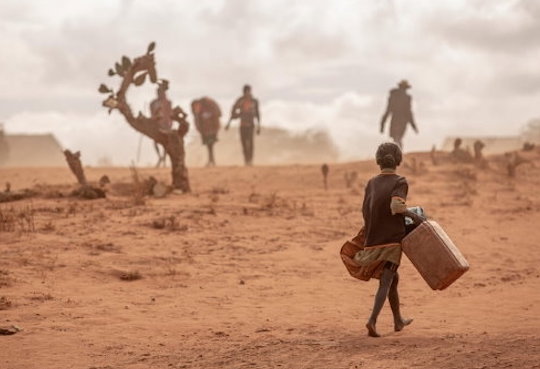 A “toxic cocktail” comprising the COVID-19 pandemic, the climate crisis, and “increasingly severe and protracted” violent conflicts is contributing to the reversal of progress in eliminating hunger, according to the 2021 Global Hunger Index.

The annual analysis of hunger levels in dozens of countries, released Wednesday, found that violent conflict is the leading cause of food crises because it affects the entire food system. Everything from production to harvesting, processing to transport, input supply to financing, and marketing to consumption is disrupted during a conflict.

“It’s really challenging to tackle just one aspect of the food system without looking at the interdependencies between the various steps of producing the food to consuming the food … We need to be looking at tackling conflict across that entire food chain if you want to really improve food security for those who are most at risk,” said Anushree Rao, director of policy and campaigns at Concern Worldwide UK. Concern Worldwide produces the index in collaboration with German humanitarian organization Welthungerhilfe.

“To look at making progress towards tackling hunger and malnutrition … you need to be looking at building more resilient food systems,” Rao said.

More than half of the people who were hungry in 2020 lived in countries with active conflict. Somalia was found to be facing “extremely alarming” levels of hunger, due to “multiple crises” including droughts, floods, desert locusts, and the effects of the pandemic — on top of 30 years of conflict. It remains a fragile state despite decreased violence in recent years.

The Central African Republic, Chad, Democratic Republic of Congo, Madagascar, and Yemen had “alarming” levels of hunger. “Serious” levels were present in 31 countries.

If current levels remain unchanged, 47 countries — and therefore the world — will fail to achieve the Sustainable Development Goal of eliminating hunger by 2030 or to even reach a “low” level.

“It is difficult to be optimistic about hunger in 2021,” the report said.

Sub-Saharan Africa and South Asia are the regions with the highest hunger levels, considered “serious.” Europe, Central Asia, Latin America and the Caribbean, East Asia, Southeast Asia, West Asia, and North Africa all scored in the low or moderate range on the index.

The pandemic worsened global malnutrition by contributing to food insecurity, as well as decreasing access to prenatal care, immunizations, malnutrition treatment, and other health care, the report found. Child mortality is expected to rise because of the pandemic, but the full impact of COVID-19 is yet to be measured.

“A lot of the data is still yet to come in the sense of getting the full picture of what impact it will lead to,” Rao said. “It's really difficult because a number of these countries already have weaker data systems to be able to get a true sense of what the true level of hunger and vulnerability is.”

“What we can definitely say for sure is COVID is going to further disrupt the efforts that we are trying to make in improving hunger,” she continued.

It measures hunger on a 100-point scale, with “0” indicating the best score of no hunger and “100” indicating the worst. Levels of hunger are shown in five categories: low, moderate, serious, alarming, and extremely alarming. In total, 116 countries had sufficient data to calculate the latest scores.

While the prevalence of undernourishment had been declining for decades, it is now moving in the wrong direction. The report found that this indicator may be responsible for the lack of progress among the other three. The world’s Global Hunger Index score fell 4.7 points between 2006 and 2012, from 25.1 to 20.4, but declined just 2.5 points since 2012. There has been a slight rise in hunger since 2018 and “a marked increase” in 2020.

Rao said increased attention and financing are needed to make any progress on the hunger numbers. Recent decreases in global malnutrition funding from the U.K. are “a severe blow” to efforts to eliminate hunger, she said.

“Even though we’re facing a really grim situation, that doesn’t give us a reason to not act and try and reverse the situation,” Rao said.

News report by Teresa Welsh, a Senior Reporter at Devex.

News: Wealthy nations must share more resources or risk crisis for billions, warns UN chief
The head of the UN has called on rich countries to step up efforts to protect workers hit by the Covid-19 pandemic with an additional $1tn injection of...
Report: Most infants in 91 countries are malnourished, warns Unicef
Only a third of children under two in many developing countries are fed what they need for healthy growth and no progress has been made on improving their...
News: Hundreds of grassroots organisations oppose the UN Food Systems Summit
Over 300 global civil society organizations of small-scale food producers, researchers and Indigenous Peoples’ are gathering online (25-28 July) to...
Report: Almost one in three globally go hungry during pandemic
The number of people who did not have enough food to eat rose steeply during the Covid-19 pandemic to include almost a third of the world, according to a...
Report: Six-fold increase in people suffering famine-like conditions since pandemic began
11 people are likely dying every minute from hunger, now outpacing COVID-19 fatalities, warns Oxfam.
Printer-friendly version