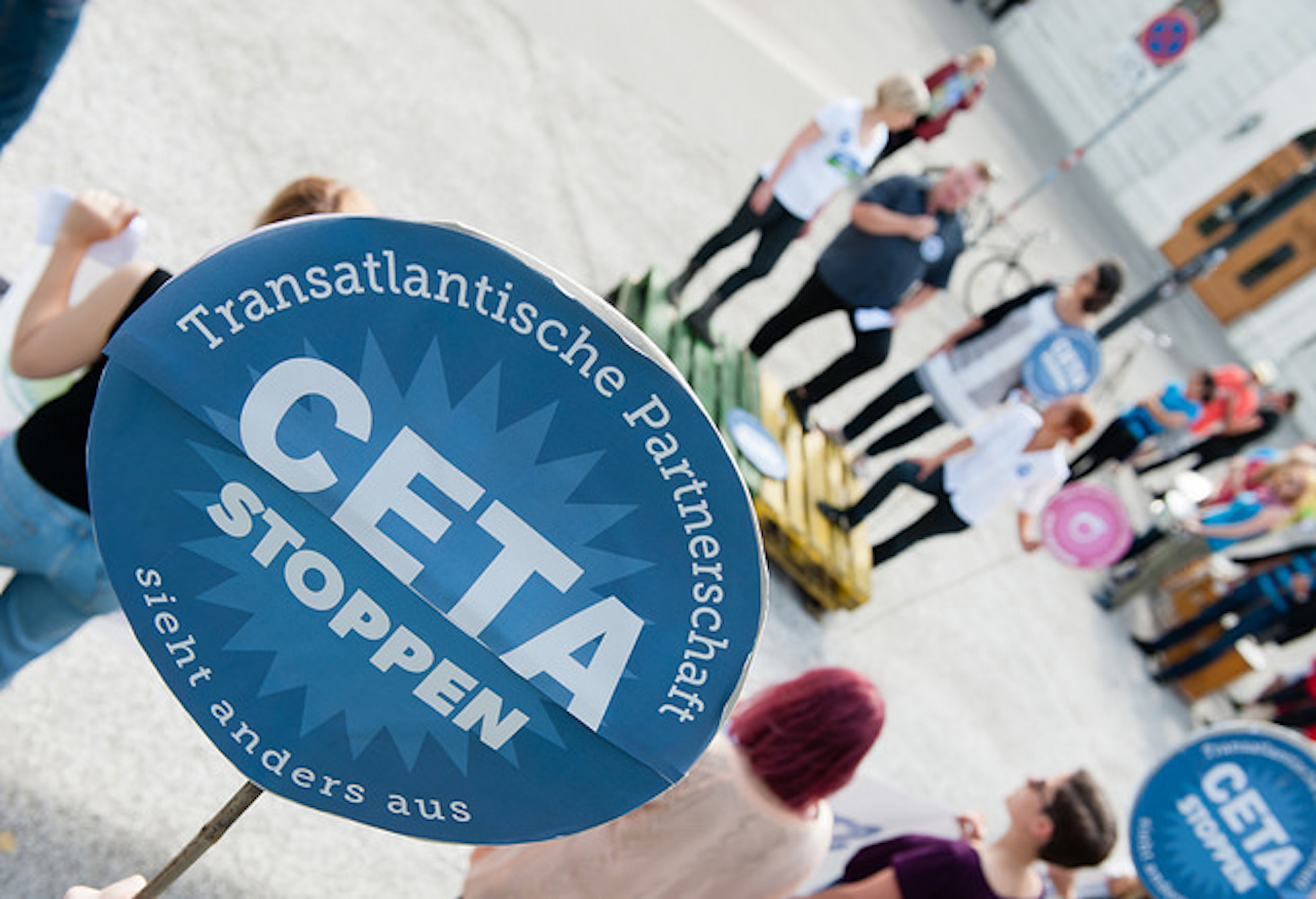 Over 450 public interest groups from across Europe and Canada have urged legislators to vote against the Comprehensive Economic and Trade Agreement (CETA).

They joined forces to defend people and planet against the threats posed by the EU-Canada agreement, which still needs to be ratified by the European Parliament. Should EU parliamentarians give the trade deal the green light, ratification votes in EU member states would follow.

In an open letter sent to legislators, the groups express serious concerns about CETA, the ratification of which could weaken protections for workers and the environment, and provide foreign investors with extreme tools to attack public interest regulations.

The open letter highlights that:

Trade unions, farmer associations, environmental and public health groups as well as human rights and digital rights organisations from both sides of the Atlantic are among the long list of signatories. Their firm rejection of CETA is exemplary for the growing opposition to the controversial agreement, which has also been criticised by legal scholars, small and medium-sized businesses, as well as a number of economists.

“Ratifying CETA would give corporations a carte blanche to push through their interests no matter what. CETA contains powerful tools for corporations to bully decision makers and sue for compensation if they introduce policies to protect people and the environment that may affect company profits. We would essentially see corporations hindering governments from doing the job for which they were elected.”

“In times of catastrophic climate change, rising social inequality and growing anger of those who no longer feel represented by politicians, more rights for corporations is the last thing we need.”

Larry Brown, President of the Canadian National Union of Public and General Employees (NUPGE) who also signed the letter, added:

“We stand with European workers and members of civil society who are mobilizing against this corporate-driven trade deal, which will not benefit people. We will continue to fight the deal in Canada. We want our political leaders to move away from the failed model of past trade agreements and promote trade that benefits people and the environment.”

The General Secretary of the European Federation of Public Service Unions (EPSU), Jan Willem Goudriaan, another signatory of the letter, commented:

“Trade unions have provided ample input to the CETA negotiations in order to protect public services and strengthen labour rights. But despite last-minute concessions to clarify the possible interpretation of the agreement, our concerns are not addressed in the text. CETA has become a deal that is actually detrimental to the interests of people. We therefore urge Members of the European Parliament to stand up for citizens, public services and our democracy and vote against CETA.”

Read the full open letter to legislators (with links to translations into many languages, including French, German, and Spanish).

There has been substantial controversy in the European Parliament over the tight timetable of the CETA dossier. Coordinators of the lead committee on international trade (INTA) are expected to decide on a new schedule today (28 November). It is likely to include an INTA vote in January, following which all Members of the European Parliament would have the opportunity to vote on CETA in plenary in February.

An analysis of the CETA text and its many accompanying declarations shows that concerns over the deal’s negative impacts for workers, the environment and democracy are well-founded.

Examples illustrating the broad coalition of voices criticising CETA include:

Report: Reforming International Trade
This brief presents an analysis the free trade regime and it's negative impact on the least developed countries, and proposes more equitable alternatives...
Blog: Corporations running the world used to be science fiction - Now it's a reality
The power of corporations has reached a level never before seen in human history, often dwarfing the power of states. That is why civil society...
Article: The illegitimate power of multinational corporations
As the influence of multinational corporations over public policy continues unabated, the key challenge for those campaigning for social and environmental...
Printer-friendly version