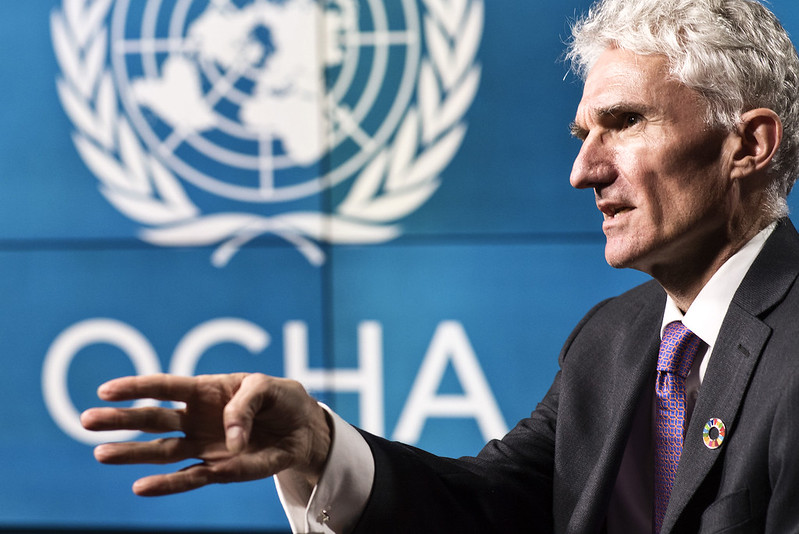 The UN’s relief coordinator, Mark Lowcock, believes next year could be worse than a “terrible” 2019, when conflict, the climate emergency and economic desperation left 165 million people in need of aid.

Extreme storms, drought and other disasters driven by the climate crisis hit the world’s poorest “first and worst”, Lowcock told the Guardian, with women, girls and those with disabilities the most badly affected.

In an end of year interview in which Lowcock examined the challenges that lie ahead, he said Syria, southern Africa and Venezuela were on his “worry list”.

“It’s been a terrible year. A year ago, I made a series of assessments which turned out to be wrong. I forecast 145 million people who need humanitarian assistance. It turned out to be 165 million,” said the under-secretary general and emergency relief coordinator.

“I don’t have a crystal ball, I don’t know what we are dealing with next year, but I have a bad feeling about it. I’m afraid I think it will be worse. I want to be wrong. But the reasons we’ve had a very bad year are still here.”

The state of geopolitics will be a key determinant in whether people in need get adequate support, he said. Millions of people in north-east and north-west Syria rely on cross-border aid. The renewal of the contract for agencies to carry out this work ends on 9 January and is being negotiated by the UN security council. It will be a “very bad situation” if it is not renewed, said Lowcock. Russia and China have already opposed proposals to change crossing points.

Meanwhile, Venezuela was no longer in the headlines, he said, but the economic situation was “more likely to deteriorate than improve”.

Lowcock said much of his work this year has been related to the climate emergency. He travelled to Malawi and Zimbabwe, a week before Cyclone Idai hit neighbouring Mozambique. “Ironically I was there because of the drought,” he said.

The agency is now dealing with floods in South Sudan, Sudan and Uganda. The UN has warned climate disasters are happened at a rate of one per week.

Women and girls are also pushed into early marriage and “transactional sex” – in exchange for basic goods, like food, soap or sanitary towels – one of the “extreme coping strategies” people resort to when in dire need, he said.

Citing Zambia as an example, which has been badly hit by drought, Lowcock said: “Dozens of primary schools are shutting in Zambia because parents are not getting their kids to school. If there’s been no harvest and a family has no income, people resort to extreme coping strategies and women and girls get drawn into transactional sex to put food on the table. That adds to the HIV risk, let alone the trauma and suffering those girls go through in that position.”

Lowcock said the UN Office for the Coordination of Humanitarian Affairs (OCHA) received “record levels” of funding this year. By November, it had raised $16bn (£12bn), $2bn more than last year.

“That’s positive, but the problem is the need is growing faster.”

The humanitarian system was working better and harder, predicting crises and averting deaths, he said.

He expected things to improve next year in Yemen, Sudan and Somalia.

“Somalia should get its debt relief passed by the World Bank and the IMF by about March and that will give it a chance to access more resources and invest more in resilience from the kind of threats Somalia has faced.”

In Sudan, following the overthrowing of the long-serving ruler, Omar al-Bashir, in April, “there is a chance for the economy to develop” if the US removes it from its state-sponsors of terrorism list to enable it to get debt relief, he said.

Despite his fears for 2020, Lowcock had reasons to be optimistic. “Firstly I’ve seen a lot of places get better. Secondly, every year we reach 100 million people, we certainly save millions of lives. Without what these brilliant agencies do, things could be a lot worse. And the third thing is, I can see how we can make the whole effort better, acting earlier and anticipating, with data.”

Late last year, OCHA got a warning of a plague outbreak in Madagascar, with a potential 2,500 cases. “From one of the funds I manage we instantly provided $1m. The upshot was there weren’t 2,500 cases, there were 250 cases. And there was no spread to the neighbouring countries which previously there had been.”

Lowcock acknowledged the UN and other aid groups had “serious problems” with trust after a series of scandals involving sex abuse and exploitation. “One of the most important things we are doing is to address the mix of colleagues at the top level. I’m a white, grey, old bloke and my boss is as well. But when I came into my current job, something like a third of the heads of my overseas offices were women, now it’s half.”

News: New STWR book: The spiritual dimensions of a climate emergency
STWR have published a book version of the popular dialogue with Mohammed Sofiane Mesbahi, titled ‘The intersection of politics and spirituality in...
Blog: Developed world sabotages UN climate summit, now declared a failure
At COP25, the world has moved even further from core principles of equity in tackling the climate crisis. By Kabir Agarwal for The Wire.
Blog: Climate financing being underhanded by rich nations, NGOs charge
The successful battle against climate change – which has triggered a rash of natural disasters, including floods, droughts and rising sea levels— will be...
News: 2020 to see 'highest figure in decades' in need of humanitarian assistance
According to OCHA’s “Global Humanitarian Overview 2020,” 168 million people worldwide will need assistance in the coming year — the “highest figure in...
Printer-friendly version