Declaration on the rights of peasants awaiting final voting and adoption 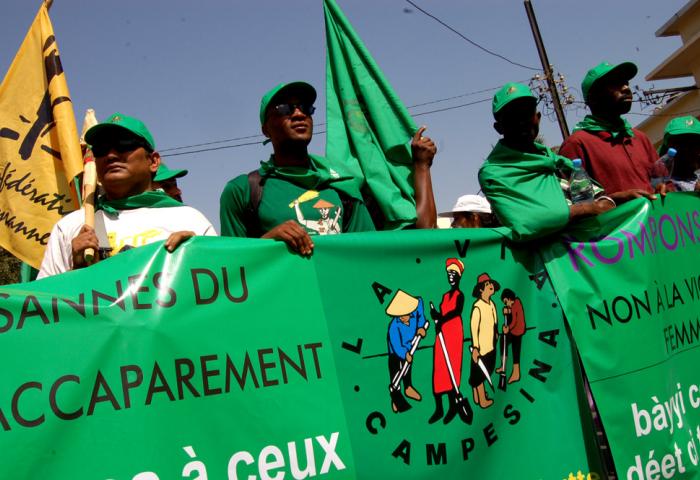 After ten long years of negotiations in Geneva, a ‘United Nations Declaration on Rights of Peasants and other People Working in Rural Areas’ is now at the point of being finalised.

The draft text of the declaration, was discussed during the Fifth Open-ended Intergovernmental Working Group (OEIWG) session between the 9th and the 13th of April 2018 at the UN Human Rights Council (UNHRC). According to the Chair-Rapporteur of the session, “States commit the highest relevance and political will for the prompt adoption of the draft United Nations declaration on the rights of peasants and other people working in rural areas”.

The Chair also stated that, “On the basis of the work carried on in the fifth session and informal and bilateral consultations, a final version of the draft declaration [will] be prepared by the Chair–Rapporteur and [will] be submitted to the Human Rights Council for its adoption”.

Later this year at the September session of UN HRC, countries will vote to adopt the text. Thereafter, the text will be tabled for final voting and adoption at the UN General Assembly.

Mobilise for a UN Declaration, Now is the time to Globalise Our Struggle!

Today over 1.2 billion peasants and their families, representing a third of the global population, face increasing violation of their rights – in the form of evictions from their lands and territories, unfavourable production and market policies, poor working conditions, ongoing criminalisation and killings, among others. This is a highly disturbing situation. Peasants and other people working in rural areas are key to achieving food security and food sovereignty, realising the right to food, fighting climate change, conserving biodiversity and revitalising rural areas.

This declaration will set a new standard for human rights. It promotes food sovereignty and supports the development and implementation of socio-economic policies that improve our food and agriculture system. It will also pave the way for the creation of public policies in favour of peasants and rural workers in countries where such policies do not exist. The UN Declaration will become a credible reference to improve existing policies further and give millions of rural peasant communities and workers an international voice.
It is therefore important to pressurise our governments to vote in favour of the final text of the declaration at the next session of the UN Human Rights Council in September 2018 and during the UN General Assemblyin New York.

In this context, La Via Campesina – a global movement of peasants, indigenous people, landless people, agricultural workers, women, and young people – is calling upon all our members and allies to mobilise and reach out to the respective governments, demand and convince them to vote in favour of this initiative that upholds humanity. We encourage everyone to create decentralised strategies to take the message of the Declaration to rural communities.

Article: Food security & agriculture: an overview
The escalating crisis of volatile food prices and food insecurity is the result of an industrial development model based on large-scale, export-orientated...
Report: Struggles of La Vía Campesina for agrarian reform and the defense of life, land and territories
On ‘Food Sovereignty Day’ La Via Campesina launches publication that calls for a massive change in the current agro-food systems
Report: Better and different! Transforming food systems through agroecology
For over half a century the struggle against poverty has been a focus of global rhetoric. Rarely, however, do people ask the most important question: Who...
Blog: Flawed global rules in agriculture: Need for a new approach
Sophia Murphy, from the Institute for Agriculture and Trade Policy (IATP) speaks with The Real News on how for the past 20 years, the World Trade...
Article: Pathways of transition to agroecological food systems
A new report by leading sustainability experts has reaffirmed the case for a paradigm shift from industrial agriculture to diversified agroecological...
Printer-friendly version