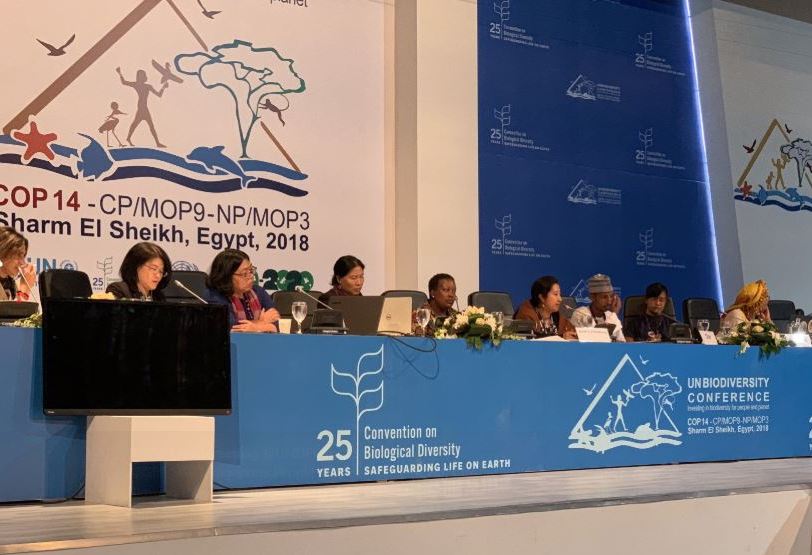 The world is facing a biodiversity crisis, and leaders and delegates of the Convention on Biological Diversity must take real action to halt the devastation of global ecosystems. Friends of the Earth International, together with other members of the CBD Alliance, delivered this urgent call for action at the opening of the 14th Conference of the Parties in Egypt.

Economic development and exploitation of Nature were key focuses in the opening statements from official delegates to the Conference, while the causes of significant and increasing biodiversity loss were left off the agenda.

“The main drivers of biodiversity loss are agriculture, infrastructure, extractivism, and the energy and manufacturing industries,” Marien said. The Convention has worked on including biodiversity consciousness into these industries through their "mainstreaming" efforts. However, so far what we are seeing is that this engages industry on their terms. The Executive Secretary of the Secretariat of the Convention, Cristiana Pașca Palmer, noted the need for substantial growth of these industries in her opening statement. However, growth of destructive sectors is by definition incompatible with biodiversity conservation.

“This is not possible, these are contradictions. We cannot have mainstreaming and engage with these sectors on their terms. Biodiversity needs to be mainstreamed, but we question the way this is being done. We need to set rules for these sectors so they stay within planetary boundaries." - Nele Marien, Friends of the Earth International Forests and Biodiversity

Teddy Baguilat, President of the Indigenous and Conserved Communities Area Consortium (ICCA Consortium) said that indigenous peoples knew how to live in harmony with nature, by using no more than what they needed.

“The rich are really consuming so much and wasting so much. Meanwhile, food producers are also the ones who are going hungry." - Teddy Baguilat

He said indigenous peoples across the world were being attacked for protecting critical watersheds and territories from destructive development, which is threatening biodiversity.

We must address the drivers of biodiversity loss now, because the poorest of the poor are the ones who feel the effects and suffer the most, said Simangele Msweli, from the Global Youth Biodiversity Network.

“We have resources, but we have people who are using more than they need. What we’d love to see are targets that speak to equity and equality so that we reduce this gap." - Simangele Msweli

“We as civil society need to fight to have rules that say ‘this is the fair play’." - Melina Sakiyama, Global Youth Biodiversity Network

The CBD Alliance, of which Friends of the Earth International is a member, called for an end to the corporate capture of Convention of Biological Diversity (CBD) negotiations.

“The CBD meetings cannot be a space for countries to greenwash their images. We don’t want to hear how well everybody is doing, we need to hear how much more you will do because it is urgent to change paths. Doing the same thing and expecting a different outcome is madness. We need nothing less than a fundamental system change and a pledge based system will simply not do it.”
- CBD Alliance

Delegates are being asked to celebrate the 25th anniversary of the entry into force of the Convention, but there is little to celebrate. Biodiversity has hugely declined, and while the slogan of the Conference is “investing in biodiversity”, there is exponentially more financial investment that destroys biodiversity than that saves it.

Friends of the Earth International underlines that the new strategic objectives for biodiversity - which will be approved at the next Conference meeting in China in 2020 - needs to be a framework that ensures the world starts living within planetary boundaries. People and planet must be prioritized over economic development, and especially so over corporate interests. The agreement must be based on a participatory, bottom-up approach from local communities and those living with Nature. The failed model of voluntary pledges seen in the Paris Agreement should not be repeated here.

“We need a change of mindset away from looking at Nature as 'natural capital' - it’s not an economic asset, Nature and biodiversity are what nurture us all.”
- Nele Marien

Report: ‘Harmony with Nature’ dialogues at the United Nations
Since 2009, a series of expert dialogues at the General Assembly of the United Nations has sought to define a new worldview based on a non-anthropocentric...
Article: A sufficiency vision for an ecologically constrained world
Owing to the limits of eco-efficiency and the need to liberate environmental space for the global poor, new policy instruments should be designed to bring...
Blog: Earth's resources consumed in ever greater destructive volumes
Humanity is devouring our planet’s resources in increasingly destructive volumes, according to a new study that reveals we have consumed a year’s worth of...
Report: The intersection of politics and spirituality in addressing the climate crisis
The following interview with STWR’s founder, Mohammed Sofiane Mesbahi, examines both the contemporary political and profounder spiritual implications of...
Printer-friendly version