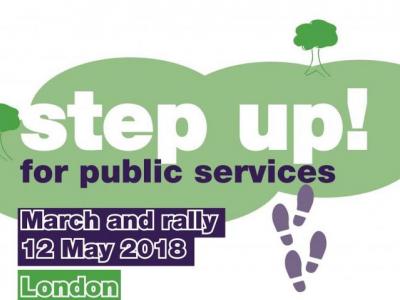 The TUC has called a national demonstration on Saturday 12 May in London, penned as "a key moment in the fight for public services."

The march is set to be a big one, organised by the TUC, UNISON and other trade unions who are putting considerable support behind it.

According to UNISON: "It’s a march with a serious message but it’ll have a fun, family-friendly feel.

"We’ll show decisionmakers we’re scared for the public services we love – and the public are on our side. We won’t take the cuts and pay freezes lying down."

The demonstration will form part of the TUC Great Jobs Agenda campaign, which sets out the key demands of the movement for how we win a new deal for working people.

Join STWR under the banner of Article 25

STWR will be taking part with our placards for Article 25, and we would love you to join us.

We will be meeting outside Embankment Station at 11am. It should not be hard to find us, just look out for our placards. The march will move off at 12pm, ending with a rally in Hyde Park until 4pm.

We are happy to bring placards along for you. Just email us to let us know, so we can prepare them for you.

We look forward to seeing you there!
More information
https://www.tuc.org.uk/new-deal-working-people-tuc-march-and-rally