Together for climate justice 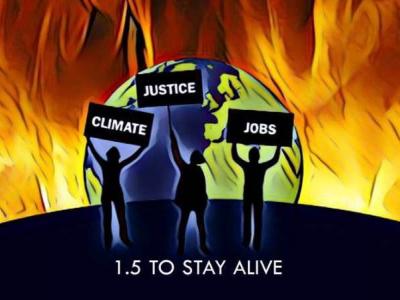 The recent IPCC report is a landmark for our planet, setting out just what is at stake if we breach 1.5C warming.

For many years 2C was talked of as a 'safe' limit. It was only by the tireless work of those countries most at risk from climate change that 1.5C made it into the Paris agreement at all. But now it is clear that 2C is 'safe' for no one. It's also clear that we're on track to overshoot it. Nations' inadequate plans to tackle climate change would see us reaching 3C or 4C within the lifetime of today's children.

Heatwaves and hurricanes make it clear: it's time to act on climate change. The Paris agreement was a starting point but we have a long way to go, and it's not just Trump who won't quit fossil fuels. From fracking to a Heathrow third runway, the UK is stalling on climate action.

This December in Poland, countries will negotiate the crucial next steps to keep the Paris climate deal on the rails. It's urgent.

But we know we can't depend on governments to represent us at UN talks infiltrated by fossil fuel interests. We need to hear the voices of those in the front line of climate change, those whose land and water is threatened by fossil fuel industry pollution, and those fighting for climate jobs. We need solidarity from all parts of society, as we saw in the unprecedented mobilisation against Trump's UK visit this summer. The government of Poland wants to suppress the voice of civil society, but we will speak out and send a clear message to our own government to act on climate now.