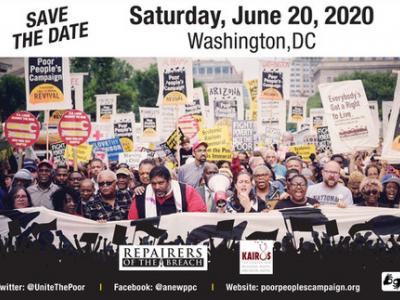 The Mass Poor People’s Assembly and Moral March on Washington is now going digital! People will gather from all 50 U.S. states and territories, and from across the world.

This will be the largest digital gathering of poor, dispossessed and impacted people, faith leaders, and people of conscience on June 20, 2020.

"The increasing urgency of a broad movement led by the poor and most impacted is more apparent every day. Now is the time to organize towards collective action to enact a moral agenda for the nation. As our ranks grow in the coming months due to COVID-19 and the ongoing crisis of poverty, building a platform for the plight, fight, and insight of the poor is even more urgent. The movement is marshalling our collective voices to demonstrate the power of our communities. We demand that both major political parties address the interlocking injustices of systemic racism, poverty, ecological devastation, militarism and the distorted moral narrative of religious nationalism by implementing our Moral Agenda."

A National Call for Moral Revival

In June 2019, the Poor People's Campaign convened over 1,000 community leaders in Washington, D.C. for the Poor People’s Moral Action Congress, which included the largest presidential candidates’ forum of the pre-debate season, the release of their Poor People’s Moral Budget, and a hearing before the House Budget Committee on the issues facing the 140 million poor and low-income people in the nation. Over the next nine months, they are embarking on a 25-state We Must Do M.O.R.E. Tour (Mobilize, Organize, Register, and Educate), which will lead toward an unprecedented Mass Poor People’s Assembly and Moral March on Washington on June 20, 2020.

In the summer of 2020, this movement will demonstrate the power of poor people to be agents of change in not just one election, but at the very heart of US democracy. In this time of significant danger and real possibility, a moral fusion movement is necessary to revive and advance the most precious constitutional and moral values. But this can only happen if those who are impacted link up with other moral leaders and people of conscience to break through the silos of their work and the divisions that have been wrought in their communities.

They rise together because:

If you believe it’s time to rise, join them!

Spread the word in your networks and social media.

If you're in the United States, get connected to your state’s coordinating committee.