Will 2014 mark the beginning of a second American revolution? 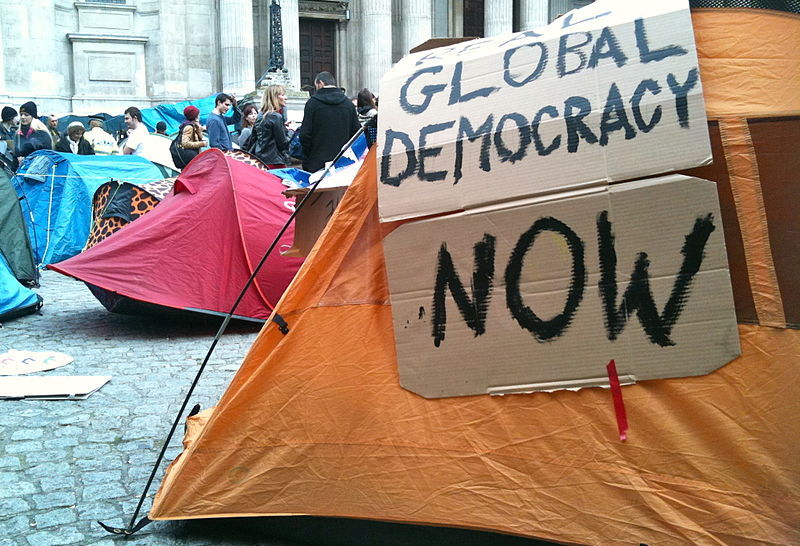 Many people at this time of social, political and economic turmoil are voicing the need for a ‘revolution’ in one form or another, with a particular focus on all that is wrong in the world’s richest and most powerful country – the United States.

Dr Zeki Ergas, a long-time supporter of STWR’s call for global economic reform in line with the principle of sharing, has taken up this question in a long political essay titled: The centre cannot hold: The second American revolution to build a better world.

Acknowledging that no-one can have all the answers for how to ‘repair, heal and restore the world’, he argues that the only way to overcome the current gridlocked social reality in the United States and beyond is through a second American revolution – out of which the conditions for a better and sustainable world can emerge.

Without a transformation of our existing political and economic structures, Ergas argues that we will soon face the catastrophic consequences of climate change and the potential onset of a third world war, in which the powerful emerging economies are pitted against the NATO alliance of the U.S. and E.U in a no-holds-barred competition for scarce mineral and energetic resources.

Yet his foreboding prediction based on current trends is qualified by his optimism that the “Mind and Hearts” of humanity will triumph in the end, and eventually overcome the “very selfish, very irresponsible, and ultimately very stupid behavior of the world's economic and political elites [that] could easily result, in a century or two, in the destruction of our planet and our (so-called) human civilization”.

For this people-led change to happen, a critical mass of support is needed among civil society to partake in a democratic revolution that can overcome the oligarchical forces that control the current world direction. Yet seeing hope in the peaceful and creative mobilisations of the Occupy movement, Ergas believes that the seeds of this revolution have already been sown “in the hundreds of small communities all around the United States in which people are beginning to slow down their lives, to think and feel properly, and to develop new values”.

Through an analysis interspersed with a series of vignettes and literary references, Ergas outlines five major areas that would constitute a social, political and economic transformation in the US, with major repercussions for the rest for the world:

1.       Defeating oligarchical power over the political and economic system.

There are many questions that remain about how a revolution can unfold across North America that would have beneficial consequences for the majority of the population and for the rest of the world, without being violently co-opted by ideological factions or further entrenching inequalities and the power of elites.

For example, can we foresee a mass uprising of ordinary people across the nation that upholds not only the rights of the 99% versus the 1% within the United States, but also the rights of the 99% across the whole world? Can we envision a coming together of ordinary Americans who prioritise the suffering of the very poorest people in remote countries as well as within their own localities, thus giving expression to the need for a renewed Global Marshall Plan effort to end life-threatening deprivation and heal the environment?

In other words, can we imagine a truly global revolution that is founded upon a genuine sharing of resources on both the national and global level, and given mass expression by the millions of people of goodwill in the world’s ailing superpower?

Moving into 2014 with all its uncertainties for the U.S. considering its volatile debt situation and internal politics, such questions have dire relevance for the outcome of further social unrest that will inevitably unfold over the year ahead.

Dr. Zeki Ergas is currently a professor in a new Masters' Program of Peace and Conflict Studies at Hacettepe University in Ankara and Istanbul. He is also Secretary General of International P.E.N.'s Swiss Romand Center and a member of Int. P.E.N.'s Writers for Peace Committee, and can be contacted at zeki.ergas[at]netplus.ch

5 Big Changes for a better and sustainable world, by Zeki Ergas [youtube video]

Article: America: The choice ahead
As the world economy continues to deteriorate, the American public must influence a momentous turnaround in global priorities and light the way for other...
Blog: In search of a better world
A new book by Dr Zeki Ergas, based on a collection of short essays originally published in Share The World’s Resources (STWR), explores the major threats...
Blog: Attention America: welfare is not a dirty word
Bravo to the magazine 'In These Times' for proudly hailing the importance of the welfare state in America. It is essential that more progressives follow...
Blog: A welfare state for America, and for the world?
This week saw the world’s first ever Global Sharing Day, a renewed focus on austerity and the welfare state in America, and an ingenious initiative from...
Printer-friendly version