What will the economy be when it grows up? 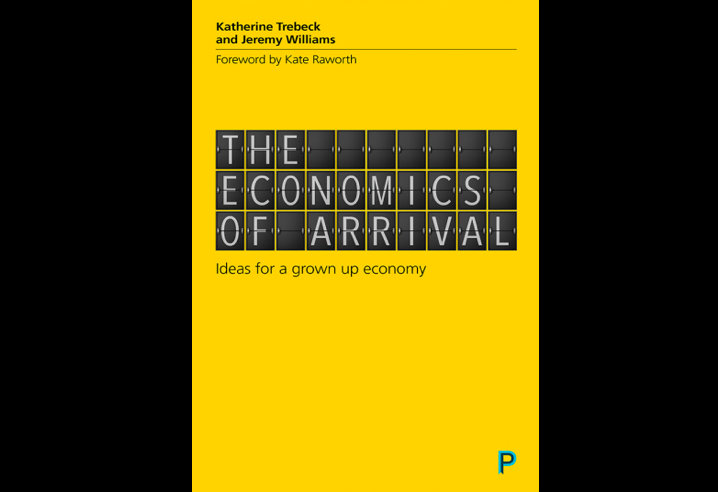 In conventional economics, growth is recorded as a good thing in itself, even if it comes at the cost of social and environmental breakdown. If we considered growth to be a means to an end, what would that end be? What would we call it, and what comes after it? These are the questions Katherine Trebeck and Jeremy Williams answer in their new book, The Economics of Arrival — Ideas for a Grown-up Economy.

Whether countries are large or small, East or West, island states or major global powers, they (almost) all share a common goal: To grow. Economic growth, as measured by GDP, is what governments aspire to above all else.

It’s how national success and political prowess are measured. A growing economy is seen to be a healthy economy, and the common assumption is that good things will follow: Poverty will decrease, and spending power, freedom, and opportunity will increase. In reality, however, things are not so simple. Depending on how the economy is constructed, growth may also bring debt, instability, greater inequality, and accelerating environmental decline. These escalating costs may ultimately begin to erode the benefits of growth, making it a futile quest.

It should go without saying that in countries and places where poverty and deprivation are still widespread, economic growth is hugely important. If people don’t have enough, wherever they are, they obviously need more — whether that is money, infrastructure, education, healthcare, or the institutions of good government.

But what if a country writ large has those things already? Does it really need more growth in the monetary sense of the term? That’s not a new question. All the way back in the 1700s Adam Smith pondered what a country might do once it had acquired a “full complement of riches.” If he were alive today, would Smith consider Britain to have reached that point? And if so, would he wonder what the point was of chasing more GDP? What would further growth achieve for us? If it comes at a social and environmental cost, are there other ways of meeting those same aims?

From the ‘means of life’ to the ‘art of life’

As a whole, Britain today has arrived in the place our ancestors looked forward to. When J M Keynes wrote his famous essay about “the economic possibilities of our grandchildren”, it was us he was thinking of. He hoped that by now we might have put the economic problems of scarcity behind us. Instead of scrabbling after the ‘means of life’, we would instead be free to cultivate ‘the art of life’. He didn’t think it would be easy — the old growth mindset would not go quietly — but those best placed to embrace the future would be those who recognised that in a collective sense, Britain had arrived.

That’s our term, not his. For us, Arrival is the point when a country theoretically has enough wealth and resources to provide a good standard of living to all its citizens. Crucially, whether it does or not is a matter of distribution, so Arrival is a possibility rather than a promise. Neither is it easy to define an exact moment when a country has ‘enough’. Nevertheless, we argue that economic growth is a means and not an end in itself. The purpose of growth is to meet our needs, at which point we can consider it to be ‘grown up’.

Arrival is the point when a country theoretically has enough wealth and resources to provide a good standard of living to all its citizens. Crucially, whether it does or not is a matter of distribution, so Arrival is a possibility rather than a promise.

Nothing grows forever in nature. Like a spreading tree, all growth proceeds to maturity. An economy that wishes to thrive within the planetary boundaries shouldn’t be any different. This is good news, as far as we’re concerned. Reaching the end of growth is a monumental achievement and something to celebrate — provided a country moves beyond the growth imperative and into a planned post-growth future.

What drives progress once the work of GDP growth is done?

That’s what we call ‘making ourselves at home’ and it is a vital part of the ideas in our book. It’s what needs to come after Arrival, and what drives progress once the work of GDP growth is done. Progress would no longer be quantitative, but qualitative. Countries would pursue inclusion, participation, and active citizenship. Industry and business would focus on a regenerative circular economy, renewable energy and zero waste — including a thriving repair culture. Politicians would look to a broader set of wellbeing metrics to judge the success of their policies. Those are of course things that countries could pursue at any point in their development, but for countries that have Arrived, they are ways of pursuing progress without material growth.

Reaching the end of growth is a monumental achievement and something to celebrate — provided a country moves beyond the growth imperative and into a planned post-growth future.

We don’t think any of that is utopian. Everything we describe is already visible in the real world, often in small projects or isolated examples. We can see what the future might look like in the raft of ethical companies, not-for-profit enterprises or B-corps — places that value the employment and culture they create as goods in themselves, with or without the need for private profit. We see cities using participative budgeting or community planning, improving lives by giving residents a voice in the places where they live. We see harmful consumerism being disrupted by new forms of sharing enabled by the internet. Governments are experimenting with new metrics and drawing inspiration from older and more holistic visions of success than GDP allows for.

The challenge now is to draw these examples together, to amplify and champion them, prove that they work and learn from them. There is an urgency to this task, something that has been captured in the new rhetoric of groups such as Extinction Rebellion and Youth Strike for the Climate.

If we don’t transition away from growth economics and embrace our Arrival and the agenda of making ourselves at home, the world’s richer countries risk destroying what they already have, while shutting out development in poorer countries. Climate change, inequality, debt, and extreme politics could undermine prosperity as fast as it is created. The world is already straining at social and environmental limits. It is time to prepare for our Arrival.

The Economics of Arrival: Ideas for a grown-up economy is out now from Policy Press. Katherine Trebeck is Knowledge and Policy lead for the Wellbeing Economy Alliance. Jeremy Williams is a writer and blogger at The Earthbound Report.

Article: It’s time for a post-Piketty vision of shared wealth
The latest bestseller in economics has done a great deal of service to progressives in highlighting the imperative of shared wealth. But given the social...
Page: Join our campaigns for Article 25
Find out more information about our current campaigning initiatives and events. You can sign up to join us on demonstrations for Article 25; download...
Blog: Debating the degrowth alternative
Giorgos Kallis, a prominent scholar on ‘degrowth’, recently wrote an essay that was the subject of debate among members of the Great Transition Initiative...
News: A zero growth economy? What would it mean for us all?
Share The World's Resources operated a stall at a Quakers conference held at Friends House, London, on the 26th September 2009. The event focussed on the...
Article: Sharing as the new common sense in a post-growth world
We need to talk a lot more about sharing as a way to radically reframe the post-growth debate, argues a recent report from the Green House. If growthism...
Printer-friendly version