The UN’s 75th birthday: A critical chance for the globe to save itself 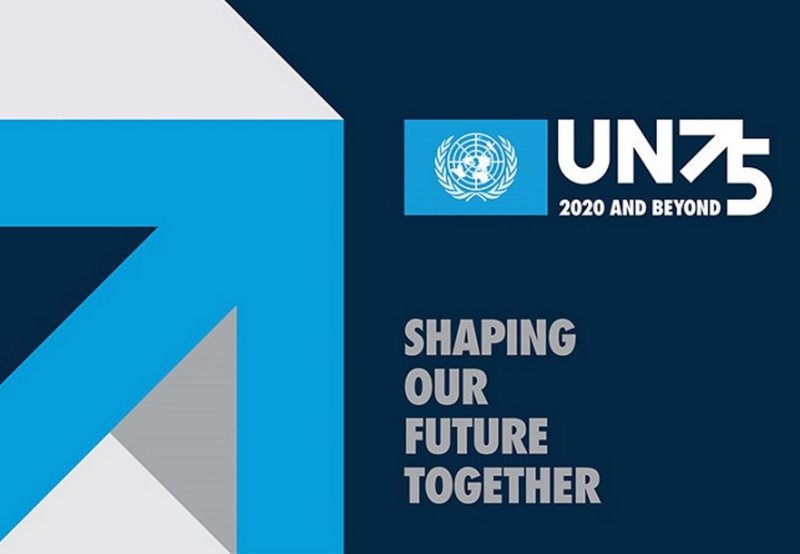 The UN’s 75th anniversary this year is a chance for taking stock, strengthening the UN and confronting the challenges the system will face in the years ahead, writes Giovanna Kuele for PassBlue.

As consensus was finally achieved on July 7, a final draft of the UN-75 political declaration has been approved and is expected to be adopted by world leaders on Sept. 21 at United Nations headquarters through virtual means. Given the political climate, the declaration is concise, clear, forward-looking and inspiring. But it is not nearly enough.

Because of the unprecedented confluence of crises engulfing the world, we must ensure that the 75th anniversary of the UN is an opportunity to reinvigorate multilateralism. The climate crisis and the Covid-19 pandemic have exposed the failures of our international system and clarified that the only way to address them is through global cooperation.

The UN’s 75th anniversary this year is a chance for taking stock, strengthening the UN and confronting the challenges the system will face in the years ahead.

The declaration fulfills its task of sending a clear political message supporting multilateralism by UN member states. Kudos to the tireless work of the co-facilitators for the intergovernmental negotiations, Alya Ahmed bin Saif Al-Thani (the permanent representative of Qatar) and Anna Karin Enestrom (the permanent representative of Sweden), who led extensive consultations since January with not only member states but also, informally, with civil society and youth representatives.

Yet it is worth noting that nongovernmental organizations with UN consultative status were not allowed to observe the negotiations.

The first paragraphs of the declaration acknowledge achievements and commitments of the UN and highlight the key global challenges that humanity faces, from climate change and the pandemic to armed conflict and inequalities. The second part focuses on 12 commitments to move the world forward, from issues that the UN has long focused on (and need to be reaffirmed) — such as the Sustainable Development Goals, gender equality and UN reform to revitalizing the General Assembly and the Security Council. New concerns, such as the need to improve digital cooperation and preparedness amid pandemics, are also among the commitments.

The declaration was finalized and placed under silence procedure (if member states are silent within 72 hours, it means they consent) on June 17. Nevertheless, Britain, Australia, Canada, India, New Zealand and the United States broke the silence, objecting to the wording “shared vision for a common future.”

The language, although added during the last revision of the draft, was the same contained in the resolution that established the procedure for the declaration. The issue this time around, however, was the association of the language with Chinese Communist Party foreign-policy doctrine.

The five countries that broke silence must be understood in the context of the great power rivalry between China and the US — the latter supported by the “five-eyes” group of intelligence partners and India.

While some countries started to push for more negotiations, the president of the General Assembly, Tijjani Muhammad-Bande, and the co-facilitators proposed alternative language as a solution and placed the declaration under silence procedure again. This time, however, the silence was broken by the US alone, objecting to language on the Paris Agreement in the document, specifically the sentence, “We need to immediately curb greenhouse gas emissions and achieve sustainable consumption and production patterns in line with the Paris Agreement and the 2030 Agenda,” according to some diplomatic sources.

Nonetheless, Muhammad-Bande’s letter to member states suggested that consensus had been achieved, saying only that one country had asked for “further clarification” on a matter.

The US move was not a big surprise, since it had opposed the language on the Paris Agreement during negotiations of the declaration. However, why did the US not break the silence on the matter before? Fortunately, it was unable to completely exclude the language on climate change. Most countries, including Britain, had expressed during early negotiations that commitments on climate change needed to be even stronger.

Again, aiming for consensus, Muhammad-Bande suggested adding the words “applicable State commitments” to the reference to the Paris Agreement in the immediate post-consensus phase, to appease the US. Unsurprisingly, other countries strongly opposed the change, particularly the Alliance of Small Island States.

Nevertheless, reflecting a commendable diplomatic effort by most member states, consensus was achieved on July 6. The new wording, however, undermines the spirit and aspirations of the Paris Agreement by giving the false belief that member states agree that the current state of self-determined commitments is enough to curb greenhouse gas emissions, whereas it is grossly insufficient. If anything, the new wording creates a basis for complacency rather than increased global cooperation on climate action.

Fortunately, some countries said they would express their dismay in a statement about the final language in the declaration regarding the Paris accord. Several nongovernmental organizations and youth groups are also aiming to work with these nations to send a strong signal on raising ambition on climate action by making a formal statement before September, when the declaration is expected to be adopted.

The declaration nevertheless reaffirms a commitment to multilateralism and sets the stage for the UN that the world needs, particularly tasking the UN secretary-general to report back before September 2021 with recommendations on how to advance the common agenda. Hopefully, the wording in the declaration will allow the secretary-general to come up with a mechanism that is innovative and inclusive.

But there is no mistaking that the manner in which consensus was achieved on the declaration poses serious questions for our global system. Will great power rivalries overshadow and prevent attempts to achieve meaningful commitments on global challenges? Can the US, opposing the current global system, single-handedly derail global cooperation at the UN? Has consensus had its day? And do UN diplomats concentrate too narrowly on intrigue and power plays in New York and fail to see the bigger picture of real-world effects?

The urgency of addressing global challenges for humanity’s survival turns the UN’s 75th anniversary into an important moment to strengthen global decision-making. Given the skepticism of some world leaders, at the very least, a meaningful statement by the vast majority of countries calling for stronger action on climate change would deliver a crucial message for the future we want.

The UN-75 Declaration, a Daring Commitment for a More Perfect World, by Richard Ponzio and Cristina Petcu for PassBlue