A shared society has to offer hope, opportunity and social justice not fear, inequality and austerity 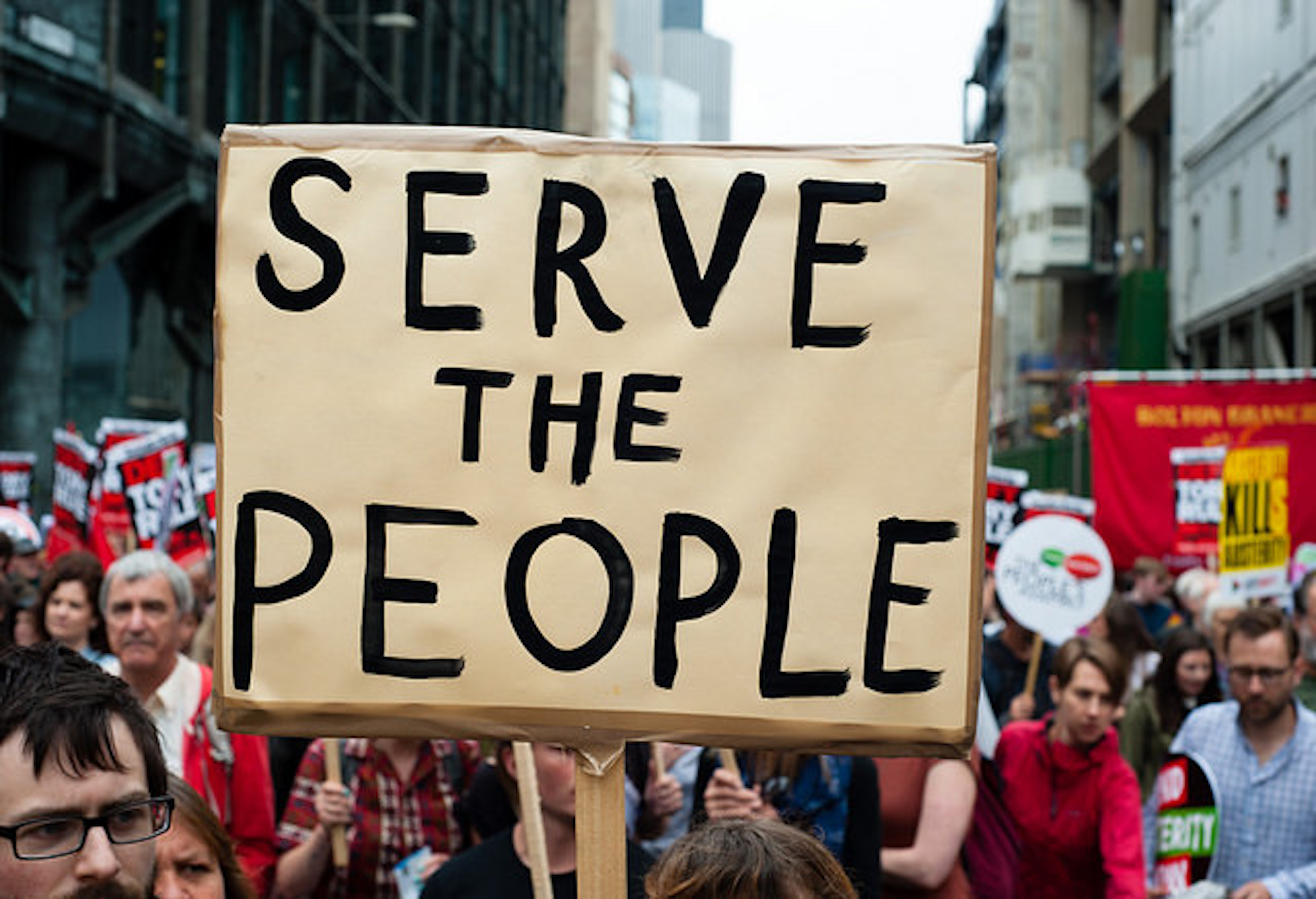 A genuinely “Shared Society” requires the redistribution of power, wealth and income. But there is no value in sharing austerity, inequality and hardship, writes John Tizard.

David Cameron launched his “Big Society” initiative only to let it wither on the vine of government. Through the “Big Society” he wanted an increased role for volunteers, voluntary social action and charities taking over from the state. Over his period in office public sector financial support for the voluntary and community, and wider charity sector was cut as austerity was imposed. Grants were all too often replaced by contracts based on a competitive procurement process. Right of centre politicians denounced charities that spoke up for their beneficiaries and challenged Government policies.

Theresa May a few years later at a time continued austerity has launched her “Shared Society”. Will it fare any better than the “Big Society”? In her speech to the Charity Commission the Prime Minister spoke about the need for the state to play a role and implied that unlike the “Big Society” her programme would be based on state intervention, regulation and funding. However, following the Autumn Statement and post-Brexit it is hard to see where any additional funding will come from and Theresa May made no hints in her speech. Without additional funding after years of austerity and cuts the “Shared Society” will struggle to take off.

However, it was encouraging for to her accept that there is a thing as society, and that it has many problems and inequalities; and that the state has a contribution to make to creating a better society and a stronger economy. This is progress but without action and money the idea may be just that - an idea. Action is needed and needed fast. The Prime Minister is right to talk about citizens’ individual and collective responsibilities. She could have talked about the numbers of people engaged in social action and volunteering. She could have also spoken about co-ops and trade unions; as well as progressive taxation. Will these feature in future speeches? Theresa May seems to be acknowledging that inequality in its many forms is a barrier to economic progress and a cancer on society. Yet her Government is presiding over high levels of poverty and inequality and to date has done little to address these.

The Institute for Fiscal Studies (IfS) has found evidence that workers will earn less in real wages in 2021 than they did in 2008. The IfS Director Paul Johnson has stated that “This has, for sure, been the worst decade for living standards certainly since the last war and probably since the 1920s.” Other analysis shows the biggest losers between now and 2020 will be lower income families, with the poorest third likely to see incomes drop. Not much shared between the well off and these fellow citizens.

An increasing proportion of people finding employment are in insecure jobs with little or no security of longevity or even guaranteed hours. Many others are being forced in to becoming “self-employed” with no guaranteed levels of income from one week to the next (or even one day to the next), no sick or holiday pay and no employer pension scheme. Already this new year the highest paid in the business sector have been paid more than most employees will be paid all year. Not much sharing through employment unless there are some radical new policies and laws.

Homelessness has not been tackled for many years and estimates that 120,000 children in Britain will be homeless this Christmas. A “Shared Society” and indeed any civilised society has to invest in homes especially social housing. Food banks are serving more and more people every week. Poverty continues as a stain on our society and for too many families including children means intolerable hardship. The Joseph Rowntree Foundation claims that there are 13.5 million people living in poverty in Britain today. This is staggering and frankly unacceptable in one of the world’s wealthiest economies. For those effected it will not seem much like a fair sense of sharing.

The Government’s so called “welfare reforms” seemingly are not even being tweaked at this stage so will continue to cause people and communities to remain in poverty, experience anxiety and stress, and hardship. Is this the “Shared Society”? The Prime Minister’s commitment to the improving mental health services is long overdue but it is not too dissimilar to the commitment made by David Cameron. Action and new funding must follow the speech. Let’s hope that there will be both.

However, public services from schools to the NHS to libraries to trading standards to the police to the fire service are being cut in real terms even when some budgets are being flat lined in pecuniary terms. Demographic growth is placing huge additional burdens on a range of public services socially social care and the NHS. Local government and NHS leaders have described the social care crisis in very direct ways using strong language and evidence to make the case that the Government has to act. The British Red Cross has described the situation as a humanitarian crisis. The Government has yet to act on this crisis. If there is be a genuine “Shared Society” surely addressing the NHS and social care crisis should be a priority.

When asked to give an example of what Government policy to support a “Shared Society” might be the Secretary of State for Education cited the creation of new grammar schools. This is interesting given the overwhelming evidence that grammar schools and the re-introduction of secondary modern schools will create greater inequality of opportunity and outcomes for young people. Social mobility can be enhanced through education but not in this way. Regional inequality is rife and even in the more prosperous parts of the country there are significant inequality, poverty and marginalised communities.

A “Shared Society” requires redistribution of power, wealth and income. This includes redistribution between places though the Government’s financial support to local government is projected to redistribute much less over the next few years. It also requires progressive personal and corporate taxation; and well-funded public services. At present we have neither so will there be new policies under the guise of the “Shared Society”? Without such change the phase may fast become shallow rhetoric and little more. That would be a wasted opportunity.

As Theresa May said there has to be a serious risk that growing alienation and inequality will fuel a surge in far right wing politics. They could too easily create social in cohesion, and threaten liberal democracy and the post-war commitment to collective social action - the very concepts at the heart of Prime Minister’s speech. I cannot see how we can create a meaningful “Shared Society” unless the Government addresses the underlying and systematic economic and social injustices, inequalities and causes of those inequalities.

Rightly the Prime Minister spoke warmly about the role and contribution of charities, the voluntary and community sector, and social enterprises. These organisations make a fantastic contribution through their services, their voice for marginalised groups and communities, and the policy role. Government has to act to support these sectors with grants, opportunities to provide funded services and respecting their legitimate and representative voice on behalf of communities and beneficiaries even when their message is challenging to Government. They can start now by offering to put flesh on the “Shared Society” idea.

A genuine “Shared Society” would see these organisations and the movements which they form at the heart of policy making and representation. Will this be the case? If not I would question how much this is going to be about sharing. In addition to the areas mentioned above I have no doubt that a “Shared Society” has to address industrial policy including industrial democracy and trade union rights; political and electoral reform; and much more.

There is no value in sharing austerity, inequality and hardship. Hope, opportunity and fairness have to be core.to a “Shared Society”. Theresa May has to turn her rhetoric into tangible policy and funding or else it could follow the “Third Way” and “Big Society” into a pile of cynical trash. Let’s see what happens.

Article: Are we stuck with inequality?
Can we get back to the equalizing, 'share-the-wealth' policies of the post-war era? Of course we can — the obstacles are political, not economic, writes...
Article: Dear European leaders, your new plan for ending inequality will not work
Europe is not faring well on the challenges posed by the sustainable development goals. Rather than battening down the hatches and chasing economic growth...
Page: Global poverty and inequality
World leaders may suggest that a great deal is being done already to prevent extreme deprivation, but this is far from the reality. Unless governments...
Printer-friendly version