Only internationalism can beat Covid-19 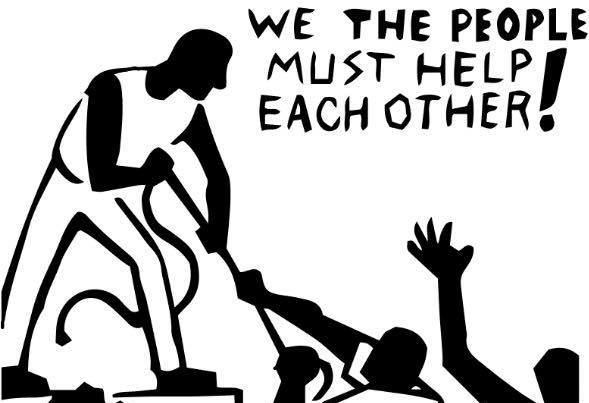 Tackling the coronavirus demands international action and solidarity on all fronts - not just for reasons of equity, but also practicality, writes Vanessa Baird for the New Internationalist.

This is a war. We can fight and win. Our country, our people… etcetera...

Bellicose rhetoric and vacuous stonewalling from the political leadership and its puppets has become all too familiar.

As the coronavirus death toll rises, the cost of denial, dithering and belittling the crisis is paid by real people, old and young, sick and healthy, losing their lives.

And the empty drum of nationalism beats louder.

It’s not what we need. In fact, it’s a big part of the problem. What we need is international action and solidarity on all fronts:

To increase sharing of scientific research, resources and information on the ways and means to treat and protect ourselves from this deadly virus.

To learn from others who have had more success in measuring and containing the epidemic.

To listen to the international experts of the WHO, rather than homegrown ideologues trying to push their pet theories, fads or private companies.

To requisition from the private sector what is needed to fight the pandemic. Not to nudge or gently invite them, as though this were just a normal competitive tender situation. To tell manufacturers who could make ventilators or personal protective equipment to get producing.

To stop Big Pharma and private companies from profiteering from the crisis but to work for the public good and humanity at large.

But most of all, to share resources fairly, so that who gets to live and who die is not dependent on depth of their pocket or their country’s health budget. The Central African Republic has just three ventilators.

We are only as safe as our most vulnerable neighbour, be that person homeless, a refugee, or one of the growing millions who do not have access to the basics they need to survive the crisis.

This last point is the most important. Not ‘just’ for reasons of equity, but also practicality. The virus will simply pop up again in new clusters if the approach to tackle it is not universal and equitable. Ignore the weakest at your peril, aid agencies are warning.

Indian president Narendra Modi will soon find this out. His ordering of a sudden and draconian lockdown that could be obeyed only by the comfortably housed, revealed that he did not even see millions of people in his country, let alone take account of them, as writer Arundhati Roy adroitly pointed out.

Neoliberal thinking combined with nationalist populism has rendered terms like ‘universal’ and ‘equitable’ unfashionable. But all that has to change.

Competition is a killer in a time of Covid-19; the dog-eat-dog approach to everything makes a tragic situation especially toxic.

When President Trump, dog-in-chief, ordered the seizure of masks bound for Germany but made by a US-owned company in Thailand, shouts of ‘piracy’ rang out. But even within the United States, capitalist competition, red in tooth and claw, is plain to see in the unholy scramble for essential medical equipment, with supplies going to the state that can pay the profiteer’s highest price. The ‘invisible hand of the market’ is one soaked in blood.

Trump also had to be told by Angela Merkel that ‘no’ he could not buy the patent for a vaccine from the German company CureVac so that it be used exclusively in the US. The vaccine, if successful would be for humanity he was told – and the EU promptly provided more funding to the company.

While Trumpian America is pumping out anti-China conspiracy theories with viral speed, Cuba is quietly sending doctors to Italy – to help.

There are other ways – internationalist approaches – that have the benefit of humankind front and centre.

Activists and progressives are calling for such an internationalist response. In this era of lockdown, groups like The Transnational Institute and Another Europe is Possible have been holding virtual conferences and webinars calling for international co-operation.

Campaigners are demanding any vaccine that emerges to be released on open licence, a complete overhaul of the pharmaceutical industry based on public ownership, and pooled resources across borders to deal with the humanitarian crisis. Britain must remain a member of the European Medical Agency, says Another Europe is Possible.

Taking part in a webinar organized by the movement at the weekend, Labour MP John McDonnell said there had been a failure of international co-ordination at an official level to date.

A couple of weeks ago, former Labour prime minister Gordon Brown called for a new ‘global government’ to deal with the crisis. (Brown had been key in creating a global task force at the time of the 2008 financial crash). There have been a couple of virtual meetings of the G20 finance ministers, but little else. They did not include the UN Security Council which has not met on the topic at all.

The World Health Organization (WHO) has played an international role of sorts, issuing sensible but limited advice, often ignored by rightwing populist and libertarian governments. WHO chief Tedros Addanom Ghebreyesus‘s timely and simple entreaty: ‘Test, test, test,’ fell on deaf ears in the UK, the US and France (but not in Germany or South Korea). His observation: ‘This epidemic can be pushed back with a collective, co-ordinated and comprehensive approach that engages the entire machinery of government,’ seems to be proving right, in the negative at least.

Meanwhile, UN Secretary-General António Guterres has spoken up at least. Seeing that the most vulnerable to the virus are likely to be victims of war in countries where health facilities have been systematically destroyed, he implored warring parties in Syria, Yemen, Afghanistan and elsewhere to lay down arms and direct their efforts instead to combatting the virus.

But grassroots internationalists are also calling for responsible and humane immigration policies, an end to rightwing strategic hostility towards refugees and asylum seekers. People seeking asylum or living in refugee camps are especially vulnerable to infection and the impact of government lockdowns. They are more likely to have compromised immunity, have limited access to the means of survival, lack access to basic sanitation needed for regular handwashing, and will find it harder to socially distance

And when it's all over?

One day the pandemic will be over. It would be naïve to imagine those in power and their think-tank and business allies are not thinking about how to maintain all those extra new powers of surveillance and social control they have so effortlessly accrued during the lockdown, as well as the freedom to rule with a diminished level of public scrutiny and accountability

Which is why progressives have to come together (virtually if not physically) to campaign not only for the right to life now but also for the civil liberties and social justice of the future.

Just over a decade ago we were in the throes of another crisis – the global financial meltdown. At that time, we identified the crisis as the colossal failure of neoliberal globalized capitalism – just as today we see an epidemic made so much worse due to the privatization of public services and the ubiquity of just-in-time global supply chains.

At the time of the 2008 crisis we said everything would need to be different now – there could be no going back to ‘business as usual’. As we are saying now. But what happened in the wake of the financial crash was bank bailouts and a massive transfer of wealth from the public to the private sphere, followed by a decade of austerity policies that ransacked and weakened public services, including health.

We must not let the same thing happen again.

Covid-19 is a terrible and terrifying collective experience – but it is also a wake-up call.

Article: Will Covid-19 spur a peoples’ bailout for the world’s poorest?
The question is whether Covid-19 will awaken us to the stark inequalities of our world, or does it simply represent a new cause of impoverishment for the...
News: G20 suspends debt payments for poorest countries
International aid and development organisations stress that suspending debt payments during a major global economic and health emergency may not be enough...
News: Coronavirus could turn back the clock 30 years on global poverty
The economic impact of the global shutdown could push half a billion people into privation, researchers warn.
Blog: The Great Pause
The coronavirus has brought our economy to a standstill. But instead of rebuilding a broken system, we must explore how we can build back better, write...
Printer-friendly version