Notes from a remarkable political moment for climate change 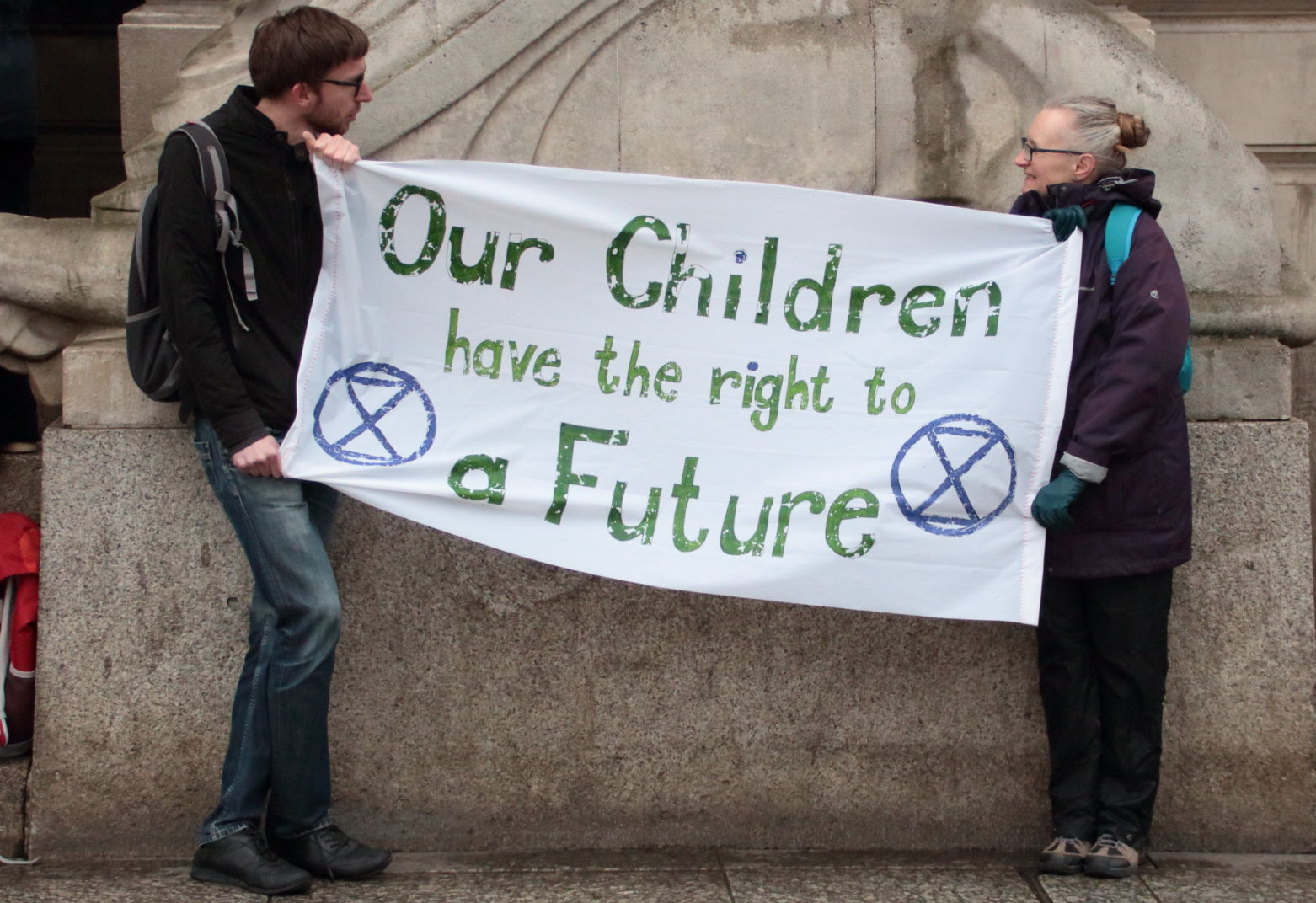 We're in a new climate moment, but social movements must ramp up pressure towards a Second World War–scale mobilization for ending the fossil fuel age, writes Bill McKibben.

On Wednesday, the British House of Commons, led by the Conservative Party, voted to declare that the planet was in a “climate emergency.”

The day before, a CNN poll found that, in the United States, Democratic voters care more about climate change than about any other issue in the upcoming Presidential election: more than health care, more than gun control, more than free college, more than impeaching the President. Having followed the issue closely since I wrote my first book about climate change, thirty years ago, I think I can say that we’re in a remarkable moment, when, after years of languishing, climate concern is suddenly and explosively rising to the top of the political agenda. Maybe, though not certainly, it is rising fast enough that we’ll get real action.

This is not, in fact, the first climate moment: there have been a few times during the past three decades when it appeared as if our political leaders might seriously engage with the issue. The first was in 1988, when the nasa scientist Jim Hansen’s testimony to Congress took the problem public. People were shocked to learn that the Mississippi River was so drought-diminished that barge traffic had slowed; Time named “Endangered Earth” its Planet of the Year; George H. W. Bush, running for President against Michael Dukakis, promised to battle the greenhouse effect with “the White House effect.”

Another moment came in the mid-aughts, with the release of Al Gore’s documentary “An Inconvenient Truth.” The film’s graphic findings produced what seemed like a bipartisan groundswell: Gore’s Alliance for Climate Protection produced ads pairing political odd fellows, such as Al Sharpton and Pat Robertson, sounding the alarm. In one ad, Newt Gingrich and Nancy Pelosi sit side by side on a couch, in front of the Capitol. “We don’t always see eye to eye, do we Newt?” Pelosi says.

“No,” Gingrich replies. “But we do agree our country must take action to address climate change.”

Neither of those moments, though, produced real change. Bush did nothing; Gingrich, running for President in 2011, called the ad “probably the dumbest single thing I’ve done in recent years.” Congress never acted, and the temperature kept rising.

But this third climate moment is rooted in broad movements, not élite opinion, and so it feels different. Right now, a group of young people is touring the country pushing for action on a Green New Deal, the legislation introduced earlier this year by Representative Alexandria Ocasio-Cortez and Senator Ed Markey, which would push for the rapid decarbonization of America’s energy supply. Polls show surprisingly widespread public support for it, and various versions are being introduced in cities and states across the nation, as well as in other countries. The Climate Mobilization Act, the most ambitious plan of its kind in a large city, passed in the City Council, two weeks ago, and Mayor Bill de Blasio signed it into law on Earth Day. Meanwhile, much of central London was shut down for a week by a group called Extinction Rebellion, which camped in the streets, Occupy-style (and had the good sense to eventually leave to fight again another day). And, perhaps most remarkably, school students around the world have been staging daylong strikes, following the lead of Greta Thunberg, a Swedish teen-ager who in recent days has met with the Pope and addressed both the European Parliament and the British Parliament.

Many streams contributed to this tide. Ten years of movement-building, often led by those most at risk, laid a foundation (the young people of the Sunrise Movement who have championed the Green New Deal cut their teeth in the campus fossil-fuel-divestment movement). Scientists sharpened their analysis (last year’s report from the Intergovernmental Panel on Climate Change was the first to set a deadline—of 2030—for being fully underway with the fundamental transformation necessary to meet the targets set in the Paris climate accords). Donald Trump’s foolery heightened apprehensions (one senses that even some of his most loyal supporters doubt that global warming is a “hoax manufactured by the Chinese”). And nature itself provided the strongest boost: flood after drought after firestorm, in every corner of the planet, pierced public consciousness. Last November, Americans saw a town called Paradise literally turned into hell within half an hour, and suddenly they had a glimpse of what climate change looks like.

So, what now? Movements will continue to ramp up the pressure. Groups such as 350.org (which I helped found) are confident that adults will shortly start responding to the calls from Thunberg and her peers to back them up with strikes of their own. That kind of pressure is already getting results; even before the new polling, Democratic candidates were pledging their support for dramatic action. Several, led by Senator Elizabeth Warren, have come out strongly against allowing federal land to be used for oil and gas drilling—a “Keep It in the Ground” stance that, until a few months ago, was mainly the province of activists.

Such strong steps are clearly required. Having wasted three decades, we now have no choice but to move decisively, cutting our carbon emissions by five, six, seven per cent a year, or more. That will be as hard to achieve as was, say, the retooling of the American economy to fight the Second World War.

Or, actually, harder. We know now that the fossil-fuel companies knew all thatwas needed to be known about climate change back in the nineteen-eighties. (They even began raising the height of drilling rigs to compensate for the rise in the sea level that they knew was in the offing.) But they didn’t share that news. Instead, they kept the country in a debate about whether global warming was real, even though they knew that to argue otherwise was a lie. And that lie cost us what may have been the crucial three decades.

In recent years, fossil-fuel companies have sidled in the direction of scientific truth, but they’ve continued to fight efforts at actual change. Citizens in Colorado added to last year’s ballot a proposition intended not to block oil or gas drilling but merely to keep new rigs further from homes and schools. Proposition 112 was well ahead in the polls, but oil and gas companies spent some forty million dollars to defeat it, outspending the other side forty-to-one and turning the referendum into one of the costliest in the history of the state. The industry, of course, also uses its money to support politicians. Koch Industries, part of whose vast holdings are in the coal and oil industries, is the second-largest private company in the country, and last year its pac was the largest political spender in the sector. It was recently reported that, in the last quarter, Senator Susan Collins’ reëlection fund received five times as much in contributions from fossil-fuel executives in Texas—fifty thousand dollars—as from her constituents in Maine. (She is viewed as one of the most vulnerable Republicans in the Senate, heading into 2020.)

Sooner or later, though, the companies will feel enough pressure to make a move—probably when a Democrat takes control of the White House, especially if Republican control of the Senate also begins to wobble. (Perhaps it could even happen under a reëlected President Trump—just a few years ago, he was signing on to ads much like the one Gingrich endorsed.) Whenever it happens, that’s when things will get interesting. The first card that the industry is likely to play—indeed, it has already hinted as much—is support for a modest carbon tax, perhaps forty dollars a ton. In return, it would demand an end to effective regulation from the E.P.A. and liability for the damage its product has already caused. (Microsoft recently put its muscle behind just such a plan, from the Climate Leadership Council, which would give the industry a get-out-of-jail free card.)

A modest carbon tax, had such a deal been struck in 1989, would have mattered a lot. It would have rejiggered a million spreadsheets, nudging the ocean liner that is our economy onto a new compass reading not too far off our heading—but one that, over the years, would have steered us into relatively safe waters. And even at this late date there’s no intellectual argument against putting a price on carbon—most economists are for it. All things equal, it is a good idea. But there’s also no way that such an approach alone can do the trick: were we to rely on carbon taxes to cut emissions at the rate required now, they would need to be so high that no political system could sustain them. (The I.P.C.C. study said that, at the high end, carbon taxes might need to reach five thousand five hundred dollars a ton to squeeze the last drops of fossil fuel out of the economy.)

The oil companies can live with a modest tax because it’s a way to extend their basic business model for a couple more decades, which is, perhaps, the best they can muster in a world in which engineers are cutting the cost of a solar panel by a per cent or two every month. And, for the companies, it’s infinitely preferable to the Green New Deal—not to mention the growing pack of lawsuits from cities large and small, demanding cash to build sea walls; New York City’s plan to divest its pension funds from fossil-fuel companies; and thousands of protesters in kayaks mobbing their rigs as they try to set off to drill in the Arctic.

It would also have appeal for the many politicians who care at least a little about climate change and who have despaired of a deal ever emerging. Their response is likely to be: don’t make the perfect the enemy of the good; you have to start somewhere. The problem is that the ultimate negotiation is being carried out with science, which adamantly rejects compromise. It doesn’t even really negotiate. It’s not interested in who gave what contribution to whom: it just takes the carbon we produce and makes the oceans ever more acidic. To answer that, at this point, means, in policy terms, a Second World War–scale mobilization to deploy renewable energy and a commitment to stop new exploration and development of fossil fuels. It means an explicit acknowledgment that their age is over, and that the transition to clean energy is our top priority.

Political reality is always important, but in this case there’s something more crucial—call it just plain reality. It dictates that every step we take from here on pay heed to the underlying science, above all to the shrinking time we have left to make any real difference. After thirty years of standing still, baby steps won’t do us a bit of good, and a misstep may cost us our last chance.

Report: The intersection of politics and spirituality in addressing the climate crisis
The following interview with STWR’s founder, Mohammed Sofiane Mesbahi, examines both the contemporary political and profounder spiritual implications of...
Blog: Greta Thunberg is right – only a general strike will force action on climate change
Every day at work we all contribute to a system that is burning us alive. Downing tools on 27 September will help change it, writes McEver Dugan and Evan...
Blog: Greta Thunberg’s speech to UN secretary general António Guterres
In a speech given at the UN Climate Change Conference in Poland (COP24), 15-year-old Greta Thunberg cuts to the heart of the challenge and calls for the...
Report: Fight against climate change and poverty will fail without overhaul of global financial system, says major UN report
A major new UN-led report warns that a comprehensive overhaul of the world’s financial system is necessary if governments are to honour commitments to...
Printer-friendly version