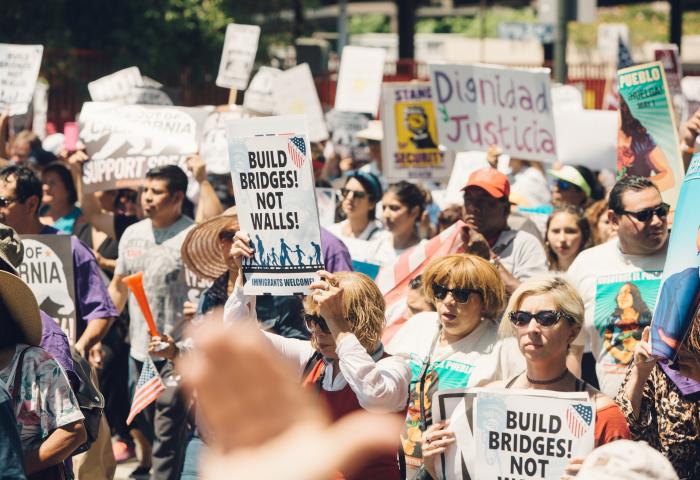 Migrants around the world are facing new barriers to humanitarian aid and public services as some governments have criminalized or sought to limit efforts to help refugees, sometimes in a bid to deter migration—and often in violation of human rights, according to a new report (pdf) by the International Red Cross.

The "new walled order," as the International Federation of Red Cross and Red Crescent Societies (IFRC) calls intentionally limited access to basic services, is endangering lives and risks setting back humanitarian advances by a century.

"All people, regardless of immigration status, should have access to basic services and humanitarian assistance," Francesco Rocca, president of IFRC, told The Guardian. "There is no need to mistreat people to have proper border control. Preventing access to adequate food, basic healthcare, and legal advice about their rights is completely unacceptable."

In recent years, NGOs have seen increased opposition to their search-and-rescue operations in the Mediterranean Sea, through which hundreds of migrants' lives have been saved, as "toxic narratives" accusing the groups of colluding with human smugglers have taken hold. Last year, the Italian government established a Code of Conduct limiting NGOs' activity in Libyan waters.

The mayor of Calais, France essentially made food distribution by aid groups at the site of a former migrant camp there illegal when he banned "repeated, prolonged gatherings—making it impossible for the camp to be re-established.

The fear of arrest has also kept many migrants from accessing healthcare, with "dire consequences" especially felt by children and the elderly.

"In some countries, immigration officers are posted at hospitals to identify and arrest those with papers, whilst other governments also oblige collection and sharing of details of undocumented migrants seeking treatment in public hospitals," read the report.

The presence of immigration agents at healthcare facilities is a violation of the Guidelines of the European Commission Against Racism and Intolerance, the Red Cross notes.

"This criminalization of compassion is extremely worrying," Rocca told The Guardian."The idea that the prospect of basic assistance or search and rescue somehow acts as a pull factor for migration is simply not true. People decide to move for reasons that are much more profound than this."

Governments must establish "firewalls" between public services like healthcare and immigration enforcement operations, the report says, to ensure that "vulnerable migrants get the assistance they need, without fear of arrest."

In the U.S., President Donald Trump has drawn worldwide condemnation for his anti-immigration policies, some of which administration officials have explicitly said are meant to deter migration.

In addition to separating families and failing to guarantee immigrants due process, the Trump administration has created a culture of fear in immigrant and Latino communities by allowing immigration agents to make arrests at courthouses and threatening local police departments with funding cuts if they don't assist with immigration arrests.

"Every human being, especially people fleeing conflict and insecurity, should have unhindered access to basic human rights, in particular the right to protection, health care, education, and social services, at any phase of their journey," wrote Rocca in the report. "Human dignity should be respected and protected under any circumstances and we call on everyone to stop labeling people on the move as illegal migrants."

Written by Julia Conley, a staff writer for Common Dreams.

Blog: End the wars to halt the refugee crisis
"Despite the obvious correlation between Western-sustained wars and the EU’s refugee crisis, no moral awakening is yet to be realized." By Ramzy Baroud.
Blog: Facing the causes of the problems with immigration
The root cause of our immigration problems arise out of gross global inequalities, and will have to be dealth with at the international level, sooner or...
Article: Why Congress must vote on the United States’ role in Yemen
Few Americans know that the U.S. military is making the crisis in Yemen worse by helping one side in the conflict bomb innocent civilians. We believe that...
Blog: The coming wave of climate displacement
Governments around the world are engaged in a series of talks that could alter how the movement of people across borders is managed. One dialogue is...
Printer-friendly version