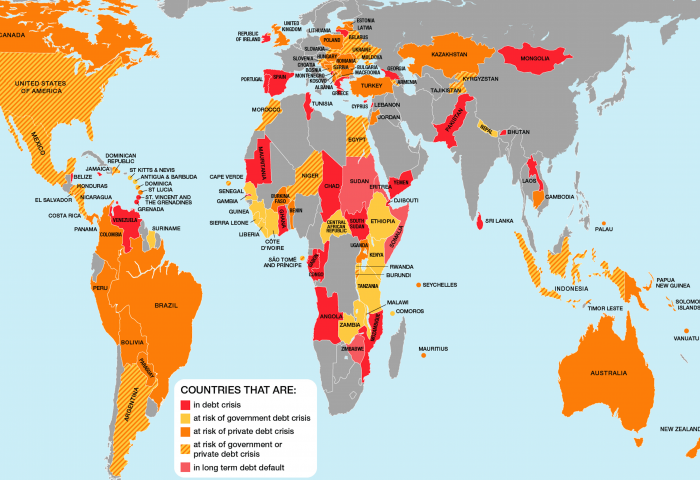 Thirty-one countries across the world are now in debt crisis, with a further 82 at risk, according to new figures released by the Jubilee Debt Campaign on 16 May.

The figures are being released on the 20th anniversary of the G8 meeting in Birmingham (UK) 1998, when 70,000 people formed a human chain around the summit and called for unpayable developing country debt to be cancelled. The new figures, calculated by the Jubilee Debt Campaign, classify countries as in debt crisis if they have a large financial imbalance with the rest of the world and high government payments on external debt as a proportion of revenue.

“The global Jubilee movement successfully won $130 billion of debt cancellation for some of the most impoverished countries, leading to increased spending on health and education. However, there was insufficient action to prevent future crises and now we are seeing a worrying spread of new crises across the world. We urgently need more responsible lending and borrowing, and mechanisms to ensure reckless lenders pay their share of the costs of crises when they occur.

“Recent experience has shown debt crises can affect people in all countries, and can result from both government and private sector borrowing and lending. These figures show there are already debt crises on all continents, but even more countries are at risk of economic shocks turning vulnerability into a full blown crisis.”

In March 2018 Jubilee Debt Campaign released figures which show that developing country debt payments have increased 60% in three years, and are now at their highest level since 2004.

The IMF and World Bank only conduct comprehensive debt sustainability assessments for 67 of the most impoverished countries in the world. Of the countries they assess 30 are in debt distress or high risk of being so, up from 15 in 2013. In contrast, just 10 are at low risk, down from 24 in 2013.

The full figures behind the analysis are available here.

Report: Cancelling Third World Debt
A brief examining the urgent need to cancel debt in the developing world as part of an international emergency relief program to prevent poverty and...
Article: Debt campaigners highlight countries in crisis
Public services in some of the world’s poorest countries are being starved of resources as a result of their governments’ heavy debt loads, the Jubilee...
News: European campaigners demand G7 cancel Haiti’s debts
As G7 finance ministers gather in Iqaluit, Canada, to discuss reforming the global financial system, STWR joins campaigners from around the world in...
Report: Financing the global sharing economy, part three (9): cancel unjust debt
This section of the report Financing the Global Sharing Economy argues that debt cancellation is an essential prerequisite for ensuring a more equitable...
Printer-friendly version