A new deal for refugees and migrants? 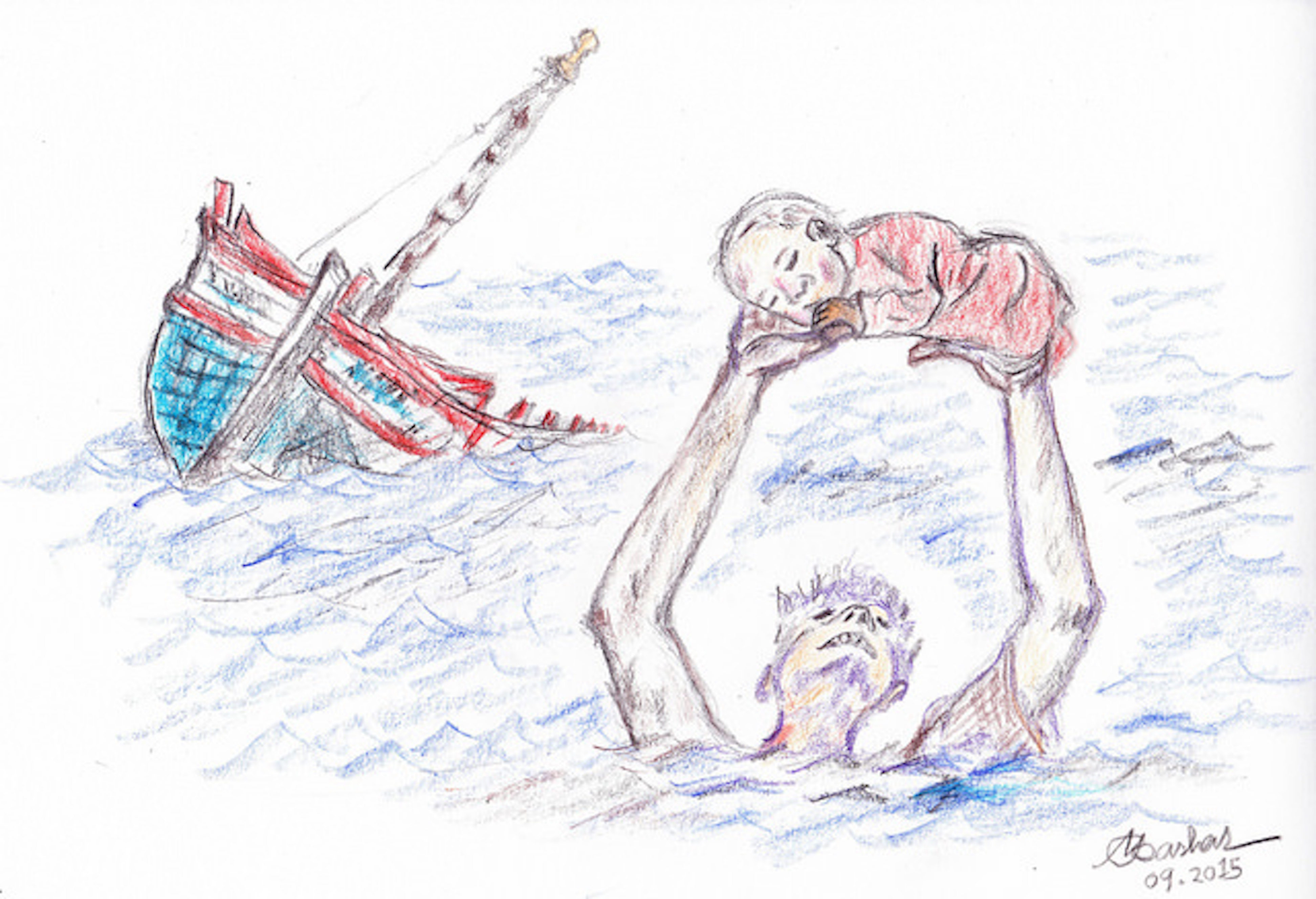 As world leaders gear up for the first ever UN Summit on refugees and migrants, civil society organisations already expect the summit to fail to agree any concrete steps for governments to share the responsibility for dealing with the escalating crisis. That is why calls for putting the equitable sharing of responsibility into practice will continue well after the Summits, reports Josephine Liebl of Oxfam International.

The first ever UN Summit on Refugees and Migrants will take place in New York on 19th September. President Obama will host a Leaders’ Summit on refugees the day after. The likely results of the Leaders’ summit are all to play for, but before diplomats headed off for their holidays, they negotiated the document that world leaders will adopt at the UN Summit next month. While it goes some way, the Summit is the start of a long process and not the delivery of the solutions the world is waiting for. What happens the day after and how we hold countries to account over the next two years will be crucial if we are to see the global response needed to address the greatest displacement crisis of our time.

Sitting through the endless negotiations in July, I asked myself what exactly UN Member States and the Secretary General were expecting when this summit was called. Comparing tracked changes and different proposals, it seemed they had forgotten its purpose:  to better protect refugees and migrants and share responsibility for some of the most vulnerable people in the world.

As Oxfam revealed in July, there’s a stunning inequality in how some countries host far more refugees than others, and it’s not based on their ability to cope. The six biggest economies in the world host less than nine per cent of the world’s refugees and asylum seekers while poorer countries are shouldering the bulk of the responsibility. Nobody can pretend the system isn’t broken and that without concrete commitments to do better, nothing will change. But instead of coming up with practical solutions, we – the NGOs listening to the negotiations – were treated to a master class in evading commitments that would help refugees and migrants. Every promise seemed to have a caveat like ‘where appropriate’, every plan something like ‘we will consider’.

The outcome is not all bad. The final document reaffirms international human rights, refugee, and humanitarian law, and governments’ commitment to non-refoulement (not returning anybody to a country where s/he could face cruel, inhumane treatment or persecution). In a world where the right to claim asylum is routinely violated, it’s also important that the Summit also underlines this right. But such reaffirmations are the bare minimum that should be expected from this document – they cannot substitute real progress.

The Summit will also strongly condemn xenophobia, racism and intolerance, and remind the world that diversity enriches every society. That might seem like a statement of the obvious – if it weren’t that countless politicians were saying precisely the opposite.

The document does go further, calling for ‘more equitable sharing of the burden and responsibility for hosting and supporting the world’s refugees’, thereby  paving the way for this to be adopted by the UN General Assembly, which takes place just after the UN Summit. But without firm commitments and a clear pathway to act upon them these nice words are meaningless and it is hard to see when the global response desperately needed will come. More people are being displaced by violence than ever before yet governments have so far settled for empty words instead of action.

The General Assembly called this Summit to change things. But listening to diplomats negotiate, I was repeatedly struck by how many managed to use the negotiations to endorse the status quo, which simply isn’t good enough. The final document refers to the need to strengthen international border management cooperation, including training. Of course states have the authority to control their borders.  But it is hard not to be cynical about what ‘best practice’ might look like after recent revelations of the EU’s plan to fund detention centres and equipment in Sudan. There is an unhealthy emphasis on the return of refugees and migrants beyond non-refoulement. Following a proposal by the Africa group, the document even suggests that a government’s decision to return refugees should not be ‘conditioned on the accomplishment of political solutions in the country of origin’. Why? Perhaps to justify Kenya closing a camp for Somalis? The US and other countries insisted on including a reference to detaining migrant children, which undermines hard-fought international human rights standards set by the UN.

Missing out the largest group of people displaced today

But it’s what the Summit will not say that’s so disappointing.  People who have been forced to flee and remain within their countries’ borders - Internally Displaced Persons (IDPs) - are barely mentioned, despite comprising double the number than that of refugees. . From Syria to South Sudan, Yemen to Nigeria, their plight is often as grave as that of refugees, though often less visible, as Oxfam’s new report on the crisis in the Lake Chad Basin (of Nigeria, Niger and Chad) makes clear.

The biggest failing of the Summit will be that it won’t agree on any concrete steps for governments to share responsibility for refugees in the future. One of the Summit’s plum results will be a “Comprehensive Refugee Response Framework” which maps out how the international community should respond to current and future refugee crisis.

But there is nothing in the framework that actually commits states to provide adequate funding. No commitment to welcome or protect a larger share of the world’s refugees or to offer them education and access to work. No commitment to resettle 10% of the world’s refugees, as countries such as Turkey that already host a hugely disproportionate share themselves had been seeking. Without tangible commitments, how much will actually change?

From this document, it is difficult to see what will be different for the world’s refugees and migrants after 19th September. But, President Obama’s separate summit the next day, and his insistence that other world leaders ‘pay to play’ – offering real figures on aid, resettlement and access to education and work– may mean that there will be more progress. Whatever happens, it is clear that these twin Summits will be the beginning, very far from the end, of delivering the change that refugees, migrants, and still more so IDPs need.

Specific solutions will have to be achieved, largely, after September. That is why calls for putting equitable sharing of responsibility into practice will continue after these Summits.

As Prime Ministers and Presidents plan to go to New York next month, they should not limit themselves to whatever lowest common denominator comes out of the UN Summit. Those joining Barack Obama the following day can immediately raise the bar by making more tangible commitments, which is why they need to hear loud and clear that their publics expect them to do more there and beyond.

Once the Summits are over, there will be so much to do. Governments will have to demonstrate that they will share responsibility in practice, including the Comprehensive Refugee Response Framework, so that the millions of people fleeing conflict, violence, disasters and poverty get the support they need. Governments will be negotiating Global Compacts on Refugees and on Migration over the next two years where we need to see more meat on the bone, more tangible change to help the millions of people in need.

We will continue to push for greater ambition in September and hold world leaders to account because what is needed is a humane response, not one borne of ignorance, avoidance and blame.

News: Aid spending stagnates as rich countries shift focus from refugees to poor nations
Rich nations spent more on helping poor countries last year but less on refugees at home, leading to stagnation in overall aid expenditure - which remains...
Blog: The call for sharing as #OneHumanity
Only when public conscience is sufficiently awakened to the critical needs of others, only when a huge swathe of the populace is standing up for the basic...
Article: Standing in solidarity for a humanity without borders
Much has been made of the basic unfairness in how responsibility is shared between nations for ameliorating the refugee crisis. But the real question is...
Printer-friendly version