New book release: Studies on the principle of sharing 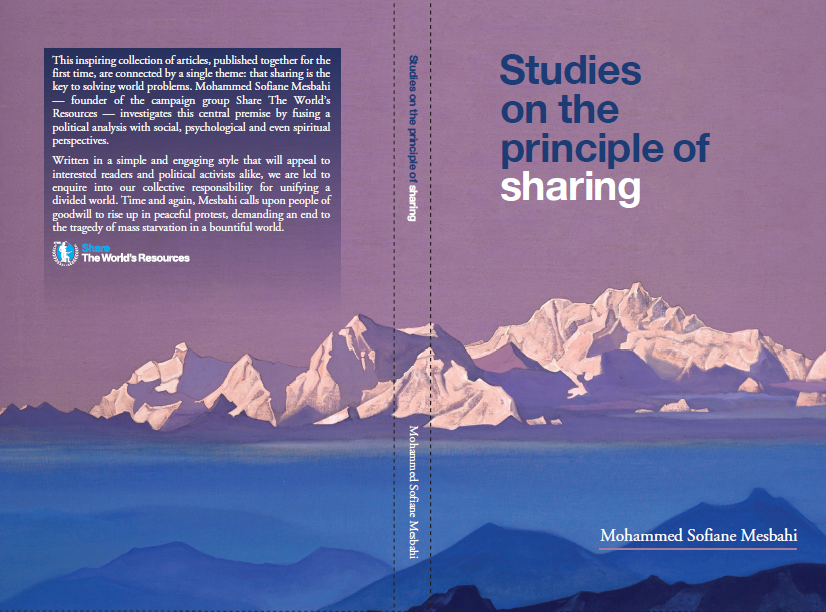 Share The World’s Resources (STWR) have now released a book version of the popular articles by Mohammed Sofiane Mesbahi, titled ‘Studies on the Principle of Sharing’.

The articles were originally published online at sharing.org over the course of 2011 to 2014, during the momentous revolutionary period that followed the global financial crisis. Much of the writing speaks to that sudden democratic awakening of society, when public uprisings and mass occupations became a significant force for change on the world stage.

But the essential vision contained within this book goes far beyond that single historical moment and has even greater relevance and urgency today.

Each article or ‘study’ reads like a joint enquiry between author and reader, leading us both to investigate the meaning of sharing as a solution to world problems—not only in an economic sense but also from social, psychological and even spiritual perspectives.

One theme Mesbahi constantly returns to is Article 25 of the Universal Declaration of Human Rights. First adopted by the United Nations General Assembly in 1948, this upholds everyone’s right to an adequate standard of living—including food, housing, healthcare and social security. Finally guaranteeing these basic entitlements for all people is central to our vision at STWR, informing our wider educational and campaigning work as a civil society organisation.

This collection of writings helps to elucidate that immense, all-embracing vision which also underpins Mesbahi’s other works. Time and again, the author calls upon people of goodwill to rise up in peaceful protest, demanding an end to the tragedy of mass starvation in a bountiful world.

To buy the book in paperback visit STWR's online store. The book is also available from online retailers around the world.

Online versions of the Studies and other books by Mesbahi can be viewed at: https://www.sharing.org/online-books

Article: Studies on the principle of sharing
In this ongoing series of studies by STWR’s founder, Mohammed Sofiane Mesbahi, he investigates the meaning and significance of the principle of sharing...
Report: Heralding Article 25: A people's strategy for world transformation
After so many years of political inaction only the massed goodwill of ordinary people can bring about an end to poverty in a world of plenty through...
News: New release of popular STWR book: Achieving a truly universal basic income
In response to high demand, STWR have published an updated book version of our perspective on a universal basic income.
Report: The intersection of politics and spirituality in addressing the climate crisis
The following interview with STWR’s founder, Mohammed Sofiane Mesbahi, examines both the contemporary political and profounder spiritual implications of...
Report: The commons of humanity
We are unable to seriously envision a new economic paradigm for managing the earth’s shared resources, unless we first contemplate the need for a...
Report: The sharing economy: Inaugurating an age of the heart
The true sharing economy represents the end of the old ways defined by the pursuit of profit and competitive self-interest, while a new age of...
Printer-friendly version