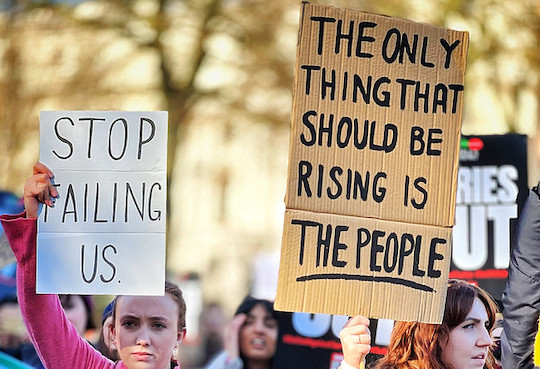 Millions of lives are at stake and the world’s most vulnerable do not have the luxury of time, write Abdulla Shahid and Gabriel Ferrero de Loma-Osorio.

As parents and global citizens, we are very worried about the cost-of-living crisis that the world is facing – the worst in over a generation. The interlinked shocks of the COVID-19 pandemic, climate change and conflicts have thrown the global food, agricultural, financial and energy systems and markets into turmoil.

The ongoing war in Ukraine has added fuel to the already precarious poverty, hunger and malnutrition situation. Besides its tragic humanitarian toll, the war is extending human suffering to all corners of the world through widespread disruptions to the planting, harvesting, transport, and export of major agricultural commodities from the Black Sea region.

The war has also disrupted prices of and access to inputs like fuels and fertilisers. And in this context, we welcome the grain trade deal which offers a lifeline to millions, and strongly urge all parties to honour the agreement.

Even before the war, hunger and malnutrition were on the rise globally, with an unacceptable 823 million people going hungry in 2021 according to the recent edition of the State of Food Security and Nutrition in the World report by five United Nations agencies, including FAO, IFAD, UNICEF, WFP and WHO. That said, the war has pushed an additional 50 million people into severe hunger in 2022 across the world. With food prices continuing to rise, another 19 million more people are expected to face chronic undernourishment globally in 2023.

These are not mere statistics but real people around the world, from Cairo to Caracas, Dhaka to Donetsk, who are going to bed hungry.

While everyone is squeezed by food price inflation, the poor are the hardest hit, especially in developing countries, where food accounts for half of a typical family’s budget. They are finding it more and more difficult to afford the food needed to nourish their families, and are being forced to reduce food intake, sell their productive assets, or take their children out of school.

As a result, we are seeing years of progress in reducing hunger and poverty reversed, undermining efforts to achieve the Sustainable Development Goals (SDGs) by 2030 while exacerbating inequalities. The World Bank warns that the war in Ukraine is likely to plunge up to 95 million people into extreme poverty, making 2022 the second-worst year ever for poverty alleviation, behind only 2020.

The growing number of export bans and trade restrictions on wheat and other commodities are making the crisis worse. These actions are counterproductive and they must be reversed.

We are glad to note that representatives from more than 100 World Trade Organization member countries have recently taken action to step up their efforts to facilitate trade in food and agricultural products and reaffirmed the importance of refraining from export restrictions.

In addition, the Group of Seven, which includes major food exporters like Canada, the European Union, and the United States, has already pledged to avoid export bans and other trade-restrictive measures.

Food insecurity and malnutrition will remain a key challenge given the intensification of its drivers, including conflict, climate variability and extremes, and economic slowdowns, combined with the high cost of nutritious foods and growing inequalities.

Working together in the spirit of multilateralism

In challenging circumstances like this, we are all called to come together, united in common responsibility, to address and solve the problem. As the UN secretary-general says: “It takes a world to fix the world.” For us, inaction is not an option.

We call on the international community to urgently support affected people, communities and countries through coordinated action. We welcome and laud several initiatives that have been launched over the past months by governments, institutions and political fora. These are mobilising leadership, finances, political will and a wide range of policy responses to the global food crisis.

To succeed, all of us must work together to ensure our actions to address the crisis converge. Millions of lives are at stake and the world’s most vulnerable do not have the luxury of time for duplication or wastage of efforts.

Thankfully, we know what we need to do, together, to raise our ambition and deliver concrete actions.

First, stepping up humanitarian response for those already in need. However, addressing this crisis and the vicious cycles it creates calls for an approach that looks at the emergency today with our focus firmly fixed on strengthening livelihoods against future shocks.

Second, urgent stabilisation of markets, debt and commodity prices to immediately restore the availability, accessibility and affordability of food to enable all people everywhere to realise their right to food. We urge countries to continue releasing strategic food stockpiles and inputs into markets, minimise hoarding and other speculative behaviour, and avoid unnecessary trade restrictions.

Fourth, restore fertiliser availability ensuring sustained and affordable access by smallholders and family farmers. This should go hand-in-hand with transformation to sustainable and inclusive production as promoted by the 2021 UN Food Systems Summit, including a commitment to increased efficiency in the use of energy and fertilisers, unleashing the potential of agroecology and other innovative approaches to sustainable agriculture.

Fifth, reinforce social protection systems needed to prevent vulnerable communities from sliding into poverty and furthering malnutrition. Examples of such measures include the time-proven school meals programme to address the impact of this crisis on children’s malnutrition, or cash transfer programmes to boost the purchasing power of poor households.

Sixth and last, countries need financial resources and the fiscal space to support strong national responses to the crisis. We need to fund existing international financing mechanisms; with the IMF and the international financial institutions (IFIs) playing an essential role. We urge countries that were proposing cuts to Official Development Assistance (ODA) commitments to reconsider their decisions and instead respect the target to direct 0.7 percent of their national incomes to ODA.

Lessons from the 2007-08 food crisis, as well as from the COVID-19 pandemic more recently, show that meaningful and principled policy response should support country-led coping strategies that involve all of society: from farmers to consumers, civil society, and businesses, especially those most affected by the food crisis.

Gladly, we have seen many countries around the world, including those that are affected most, put in place a raft of solutions to cushion their people against the crisis. These solutions should be encouraged and supported. The UN secretary-general’s Global Crisis Response Group is providing joint analysis and policy recommendations from the whole of the UN System.

We must ensure that our responses are consistent with and guided by the SDGs, which are the comprehensive blueprint for sustainable development.

More importantly, we must remain committed to sustainable transformation of our food systems. Only then will we deliver sufficient, safe, affordable, and nutritious food for all people, provide employment and income particularly in rural areas, while at the same time fully respecting planetary boundaries.

The imperative to act on the transformation of our food systems is greater now than it was in September 2021 when the UN Food Systems Summit was held.

We must do everything possible to end this food crisis and forestall future ones. We have the tools and resources to make it happen. It is time to act together to ensure no one is left behind.

Abdulla Shahid is the 67th President of the United Nations General Assembly.

Gabriel Ferrero de Loma-Osorio is the Chairperson of the UN Committee on World Food Security (CFS).

Blog: How the Treasury Department could prevent mass starvation with no cost to the taxpayers
As hunger threatens millions, the Biden administration should give its OK for the IMF to distribute financial backing to the world’s poorest countries. By...
Blog: Just two weeks of food billionaire wealth gains could fund anti-hunger effort in East Africa
While one person is dying every 48 seconds in Ethiopia, Kenya, and Somalia alone, Oxfam report that food billionaires have increased their collective...
News: World is moving backwards on eliminating hunger and malnutrition, UN report reveals
The number of people affected by hunger globally rose to as many as 828 million in 2021, according to a new UN report that provides fresh evidence that...
Blog: New world records: More weapons than ever. And a hunger crisis like no other
While the NATO Summit ended in Madrid with net commitments to double spending on weapons and to increase by eight-fold the number of troops in Europe, the...
Blog: Are we headed for mass revolts to upturn the global economic model?
How long can billionaires continue to amass wealth while the world's poorest struggle to buy food? By Paul Rogers for Common Dreams.
Printer-friendly version