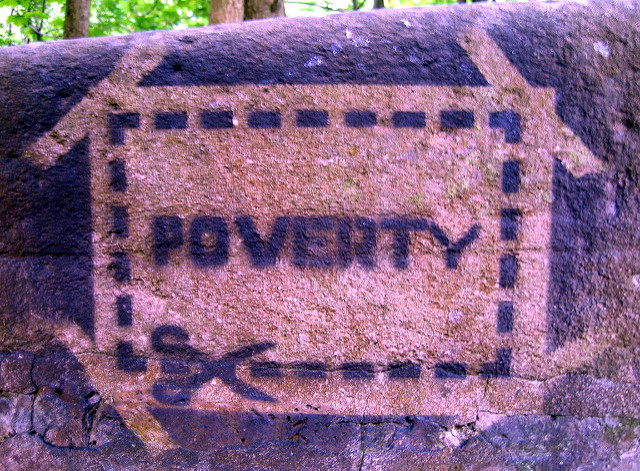 Is poverty really on the decline across the world, as widely reported by the World Bank and United Nations? This ‘good news’ narrative is far from the whole truth, explains The Rules team.

Media reporting that heralds the success of global poverty reduction strategies making claims such as “the number of people living in extreme poverty ($1.90 per person per day) has tumbled by half in two decades” is still very much routine. However, articles like Nicholas Kristof’s recent piece in the New York Times, entitled The Best News You Don’t Know that suggests that “historians may conclude that the most important thing going on in the world in the early 21st century was a stunning decline in human suffering’ accepts doctored UN numbers at face value, misguidedly casting them as if they were news.

Much as we all naturally want to believe Mr Kristoff’s rendering of reality, it masks some far deeper, more depressing truths.

We can and should recognise that there has, indeed, been some remarkable progress on some fronts, but the idea that this warrants an overall “the world is getting better” diagnosis is, we’re sorry to say, untruthful, as it is based on a very partial reading of some fundamentally unsound data. In truth, the number of people living in poverty (as measured by the $5 a day mark, which UNCTAD defines as the absolute minimum for living a healthy life) has increased by 10% since the 1980s, and hunger by 9%. This, during a period in which global GDP increased an astonishing 271%.

Right now, according to the World Bank’s database, 4.1 billion people – more than half of humanity – are living in a state of poverty. So whose pockets are really being lined with all this aggregate economic growth?

This narrative also masks the fact that this growth has been dependent on economic activity that is destroying the environment wholesale, laying bear-traps for people living in poverty long into the future. The worst aspect of this narrative is not, ultimately, its empirical dishonesty, but what it hides. It gets people believing that everything is getting better, therefore we just need more of the same to end poverty. More of the same being the neoliberal ‘capital growth at all costs’ system that got us here, into the anthropocene, with its unfolding 6th mass extinction event, its massively centralising patterns of wealth and power distribution, and its deep, structural poverty and inequality.

Far better to fess up to the whole truth, as that is far more likely to focus attention where it’s needed to actually overcome poverty: the fundamental operating principles of the economic system, starting with, ‘material growth everywhere, all the time, at all costs’.

Unfortunately, generating a political and social imperative to do that is just the sort of thing Mr Kristof’s faux ‘everything’s great and getting greater’ narrative works against.

Could you live on $1.90 a day? That's the international poverty line, The Guardian

The hunger numbers: are we counting right? The Guardian

Article: Politically-filtered views on progress against poverty
The policy interpretations given by some critics of the World Bank's global poverty data are yet another form of their own political filtering. Some...
Report: Beyond the Sustainable Development Goals: uncovering the truth about global poverty and demanding the universal realisation of Article 25
The Sustainable Development Goals – despite their positive and progressive rhetoric – by no means constitute a transformative agenda for meeting the basic...
Article: Connecting the dots: Human rights, inequality and poverty
We can rapidly realise the human rights of the world’s poor through global institutional reforms that reduce inequality and share the planet's natural...
Printer-friendly version