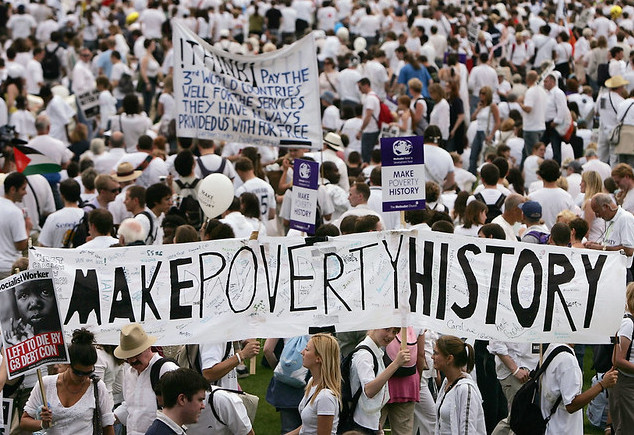 Last week marked 15 years since the G8 Summit in Gleneagles, Scotland, when leaders of the world’s richest countries agreed debt cancellation for many of the world’s poorest heavily indebted countries.

This hard won victory was the culmination of more than a decade of campaigning by the global movement which came together to tackle the crippling debt crisis that ravaged countries across Africa, Asia and Latin American in the 1980s and 1990s.

The global debt movement was led by campaigners from the global South, and supported by campaigning by millions of people around the globe, including hundreds of thousands here in the UK. In total, the campaign secured $130 billion of debt cancellation, drastically reducing the debt of 36 poor countries who had seen their public finances drained away by spiralling debt payments and whose populations had suffered big hikes in poverty, hunger, sickness and premature death as a result.

Gleneagles was heralded as a new beginning for these countries: a reset, a fresh start from which prosperity and sustainable development would follow, and at first it seemed like this was going to be the case. It certainly provided some incredibly important breathing space for countries, allowing them to invest in healthcare, education, and poverty alleviation, with some remarkably rapid results. In countries which received debt cancellation, the proportion of children completing primary school increased from 45% in the 1980s and 1990s to 66% by 2012.

Yet less than two decades later, like Groundhog Day, the global South is once again in the grip of a deeply destructive public debt crisis. At a time when the governments of poor countries need every single penny they can lay their hands on to shore up their health systems and social protection in the face of Covid-19, their funds are being syphoned away to service spiralling debts. Countries are literally having to choose between repaying debts and saving lives.

How did we get here? And how can we stop this seemingly never-ending cycle of public debt crises for poor countries? To understand how we got here we need only look at the solutions put forward by global south campaigners to the last round of debt crises. As well as calling for debt write-off, campaigners called for debt audits to understand how countries had got into so much debt in the first place, an official and permanent global process for resolving debt crises, and also new rules and mechanisms to ensure responsible borrowing and lending in future.

The world leaders who agreed to the one-off debt cancellation refused to adopt these other demands, and that’s why poor countries are once again facing a spiralling debt trap.

This time around its crucial we don’t make the same mistake. As well as securing debt cancellation, we must tackle the underlying reasons why countries have gotten into so much debt in the first place.

Debt justice means not only writing off existing debts, it also needs action to stop the outflow of wealth from poor countries via tax dodging, illicit finance flows, corruption and the repatriation of profits by multinational companies. It needs stronger regulation of banks and lenders to end predatory rip-off lending, an end to the World Bank and IMF loan programmes bailing out these reckless lenders, and a global bankruptcy process for countries to stop debt crises being resolved in the interests of powerful lenders. And it needs changes to global trade rules to stop poor countries being locked in the production of low value commodities like crops and minerals.

Gleneagles was an important milestone, but it was by no means the end of the campaign. And because the full proposals of the global debt movement weren’t heeded, that we find ourselves almost back where they started.

Many countries in the global south were heading into debt crises before Covid-19. The 2008 global financial crisis and the commodity price crash in 2014 pushed many to take on more debts. At the beginning of 2020, 34 countries were assessed by the IMF as being in debt crisis or at high risk, and 64 countries were spending more on debt payments than healthcare.

Covid-19 has dramatically accelerated this path towards debt crisis. The pandemic has hit poor countries by not one but multiple economic shocks: a collapse in tourism, a collapse in remittances, global investors pulling their money out, another commodity price crash, and big hikes in borrowing costs. And unlike countries like the UK and US, poor countries don’t have strong currencies and powerful central banks who can literally print money to fund economic recovery efforts.

That’s why, with over 250 global networks and organisations, we’re calling on world leaders to once again take action on global South debt, starting with cancelling debt payments for up-to four years for the countries that need it, and restructuring debts to bring them down to sustainable levels.

We’ve already made some important progress, but a lot more needs to be done. Because we’ve been here before, we know what’s possible: that concerted campaigning by citizens working together around the world can deliver big results.

This time it’s critical we don’t stop when we win some debt cancellation, but to keep going and win those big changes to the system that keeps poor countries locked in a cycle of poverty and debt.

Add your name to the campaign today: https://jubileedebt.org.uk/actions/stop-coronavirus-debt-disaster