Economic sharing as a challenge to neoliberal globalisation 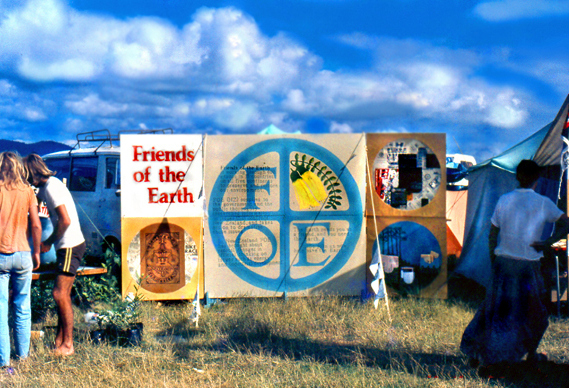 In the fresh rallying call from civil society for a new future based on sharing, it is interesting to note some old examples of NGO campaigns that call for a more equitable distribution of the world’s resources – such as this Friends of the Earth dialogue from thirteen years ago that recognises how the perennial ethic of sharing is fundamental to redressing the disastrous failure of neoliberal economic policy.

Sharing is big talk these days, with social entrepreneurs and many thousands of community groups leveraging the power of information technology to access and ‘share’ rather than own resources – a burgeoning movement that is commonly known as the sharing economy. But it is not only in the worlds of peer-to-peer innovation or community activism that the ethic of sharing is being reinvented, renewed and re-embraced. As a testament to the versatility and wide applicability of this simple and age-old practice, many influential non-governmental organisations (NGOs) also embrace the importance of sharing as a solution to today’s converging crises – and not only nationally or within the context of rich OECD nations, but also on a global basis or between the richest and poorest countries.

For example, Christian Aid uphold the principle of sharing at the centre of their work on ending poverty, and call for dramatic changes in how power and resources are shared in order to transform our unjust world. Similarly, the major focus for Oxfam’s campaign strategy in 2014 is on the intertwined issues of climate change and inequality which, as they note, is “born of the same injustice – a gross unfairness in the distribution of the world’s resources”. Friends of the Earth are also espousing sharing as “a political force to be reckoned with” and one of their Big Ideas to Change the World, and even promote economic sharing as a strategy that could counter the individualistic consumption pushed by capitalism and the growing inequality that results from it.

In this fresh rallying call from global charities for a new future based on greater sharing within our societies, it was interesting to come across a publication by Friends of the Earth International (FOEI) from thirteen years ago that makes an accessible and clearly written case for sharing the world’s resources as a challenge to neoliberal globalisation. The paper summarised the result of a two-year dialogue between FOEI members living in different economic and political circumstances in both the global North and South, and is still direly relevant in its stark warning against continuing on the present course of growing inequalities, economic disempowerment and ecological destruction. So many excellent reports from NGOs are written that few are revisited or long remembered, for which reason it’s worth re-posting below the short section about charting a new road towards global economic sharing:

Access to resources and a healthy environment as human rights

“Everyone has the right to a standard of living adequate for the health and wellbeing of himself and of his family, including food, clothing, housing and medical care...” (Article 25, UN Universal Declaration on Human Rights, 1948). Yet for many people living in already impoverished countries, access to and control over the very resources they need to provide food, water, clothing and shelter is declining, with little or no compensation in the form of finance or social security.

This has a particularly severe impact on women, who are often responsible for providing food and other basic necessities for their families. Loss of access to land and the growth of urban slums in the South are also major problems that need to be addressed as a matter of urgency. In a sustainable economy, access to resources, a healthy life and a healthy environment would be considered human rights.

Current economic policies, such as those promoted by intergovernmental organisations like the IMF and the WTO, effectively redistribute resources from the already impoverished to the rich, aggravating poverty and inequality.

Furthermore, inequality is increasing both within and between countries. In 1960, the 20% of the world’s population living in the richest countries had thirty times the income of the poorest 20%. By 1997, the richest were 74 times richer (UNDP Human Development Report, 1999). Marginalisation on the basis of gender and other social characteristics is also increasing. Furthermore, repayment of debt has resulted in a tragic ‘reverse Robin Hood’ transfer of wealth from impoverished countries to rich Northern creditors.

Redistribution needs to be reversed, in order to reach a balance whereby access to resources and benefits from the use of those resources is distributed equitably within countries, between regions and amongst people. On the basis of new internationally agreed goals (see above), governments and others should be obliged to incorporate measures that enhance equity into all economic policies and mechanisms.

Heavy financial debt burdens on impoverished countries encourage governments to allow increased exploitation of natural resources for export in order to generate foreign exchange. The export-led development programmes of the Bretton Woods institutions have reinforced this short-term and damaging approach, creating a vicious circle in which world markets are oversupplied, commodity prices tumble, and poverty-stricken countries are forced to increase exports. In addition, heavily indebted countries are often forced to slash environmental and social spending, making it difficult for governments to pursue sustainability objectives.

Thus rich, importing countries have ready access to cheap supplies of natural resources and have, in fact, incurred an ecological debt to the countries of the South which far outweighs the official financial debt of the South (which is valued at about US$355 billion in total).

The first step on the road to equity must be the cancellation of financial debt, to allow impoverished countries to invest in more sustainable development policies and to permit changes in production and consumption patterns. (A key point to be borne in mind is that it is unacceptable to reduce resource use in the North, whilst Southern countries are still obliged to export commodities to pay debt.) Furthermore, debt eradication should not be linked to export-led development as debt relief is at the moment.

The rest of the brief calls for a range of measures that are familiar to progressives within the global justice movement, including the establishment of new economic goals beyond growth, the internalisation of external social and environmental costs, the reinvigoration of local economies, the regulation of transnational corporations, the democratisation of economic decision-making, and redesigned multilateral rules and institutions. But for anyone who is now being turned on to the great potential of economic sharing, it is worth noting that all of these intersecting political issues can be framed in terms of this simple umbrella concept – and of course highlighting the imperative need to share global resources is central to the work of STWR.

However old-fashioned such so-called ‘international development’ issues may seem to the tech-savvy Generation Y of today, the fact remains that governments are steering the world in an increasingly unjust and unsustainable direction, and the perennial ethic of sharing is fundamental to redressing the disastrous failure of neoliberal economic policy. And in recognising how the principle of sharing relates to the economic drivers of worsening global crises, we all have a powerful advocacy tool in our hands for educating public opinion on the necessary direction for world change.

Link to the report by Friends of the Earth International, published in 2000: Towards sustainable economies - challenging neoliberal economic globalisation

Blog: The people’s responsibility to stand in solidarity with the poor
Blog: Imagining the ultimate global sharing day
The growing support for the sharing economy has the potential to change the way we understand and address the many challenges we face. But it is at the...
Blog: Christian Aid’s renewed focus on sharing
Of the many and varied examples of organisations, professionals and engaged citizens across the world that call for greater sharing in our societies, here...
Printer-friendly version