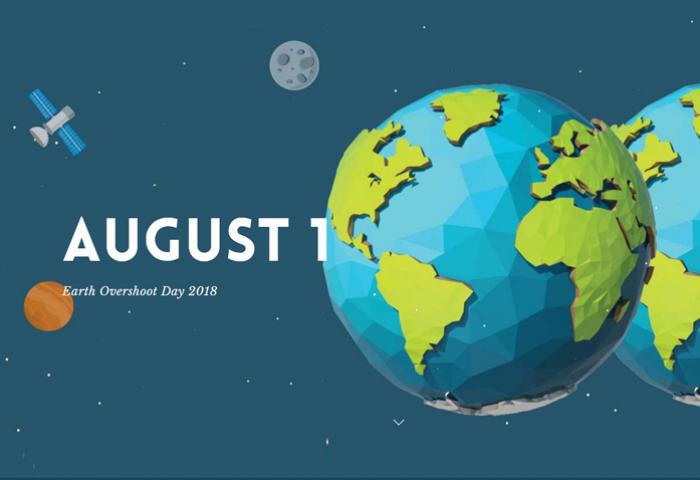 Humanity is devouring our planet’s resources in increasingly destructive volumes, according to a new study that reveals we have consumed a year’s worth of carbon, food, water, fibre, land and timber in a record 212 days.

As a result, the Earth Overshoot Day – which marks the point at which consumption exceeds the capacity of nature to regenerate – has moved forward two days to 1 August, the earliest date ever recorded.

To maintain our current appetite for resources, we would need the equivalent of 1.7 Earths, according to Global Footprint Network, an international research organisation that makes an annual assessment of how far humankind is falling into ecological debt.

The overshoot began in the 1970s, when rising populations and increasing average demands pushed consumption beyond a sustainable level. Since then, the day at which humanity has busted its annual planetary budget has moved forward.

Thirty years ago, the overshoot was on 15 October. Twenty years ago, 30 September. Ten years ago, 15 August. There was a brief slowdown, but the pace has picked back up in the past two years. On current trends, next year could mark the first time, the planet’s budget is busted in July.

The day of reckoning is moving nearer, according to Mathis Wackernagel, chief executive and co-founder of Global Footprint Network.

“Our current economies are running a Ponzi scheme with our planet,” he said. “We are borrowing the Earth’s future resources to operate our economies in the present. Like any Ponzi scheme, this works for some time. But as nations, companies, or households dig themselves deeper and deeper into debt, they eventually fall apart.”

The situation is reversible. Research by the group indicates political action is far more effective than individual choices. It notes, for example, that replacing 50% of meat consumption with a vegetarian diet would push back the overshoot date by five days. Efficiency improvements in building and industry could make a difference of three weeks, and a 50% reduction of the carbon component of the footprint would give an extra three months of breathing space.

In the past, economic slowdowns – which tend to reduce energy consumption – have also shifted the ecological budget in a positive direction. The 2007-08 financial crisis saw the date push back by five days. Recessions in the 90s and 80s also lifted some of the pressure, as did the oil shock of the mid 1970s.

But the overall trend is of costs increasingly being paid by planetary support systems.

Separate scientific studies over the past year has revealed a third of land is now acutely degraded, while tropical forests have become a source rather than a sink of carbon. Scientists have also raised the alarm about increasingly erratic weather, particularly in the Arctic, and worrying declines in populations of bees and other insect pollinators, which are essential for crops.

Blog: Why economic growth is not compatible with environmental sustainability
Federico Demaria addresses the crucial issues of economic growth and environmental degradation, and asks: is the well-being of the individual, societies...
Report: Sufficiency: Moving beyond the gospel of eco-efficiency
How to live on a shared and finite planet? A new booklet by Friends of the Earth Europe explores this question in relation to the vision of 'sufficiency...
Article: The fallacy of endless economic growth
There’s enough stuff to go around, enough for everyone to share in a decent life, so long as we all agree not to want too much. But that implies a process...
Blog: The coming wave of climate displacement
Governments around the world are engaged in a series of talks that could alter how the movement of people across borders is managed. One dialogue is...
Blog: No money, more problems as U.N. climate talks close in Bonn
United Nations climate change talks edged slightly closer to completing the Paris Agreement Work Programme, including guidelines on how to put the...
Printer-friendly version