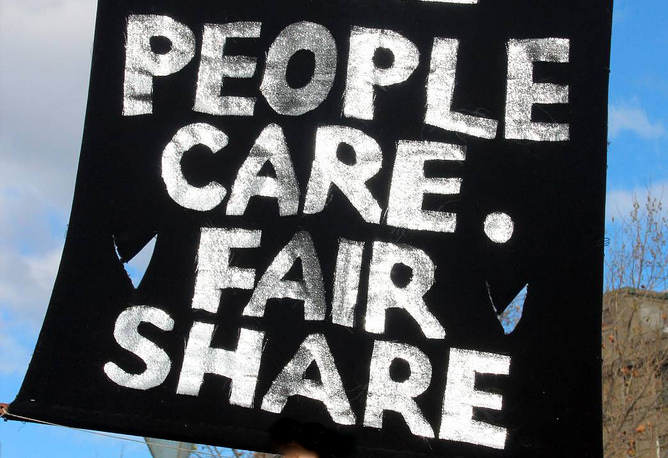 How do we widen, deepen and maintain public commitment to campaign on ‘bigger-than-self-issues' which often do not have an immediate relevance to our personal lives - issues such as world poverty or climate change?

This was the question raised at a workshop hosted by Common Cause in London last week that STWR attended alongside campaigners and representatives from a range of progressive organisations.

Common Cause describe themselves as ‘a network of people working to help rebalance cultural values to create a more equitable, sustainable and democratic society'. As a group of academics and activists, they are the foremost proponents of how to engage psychological research on ‘values and frames' to inform the way NGOs and other organisations communicate and campaign on a wide range of social and environmental issues.

Their key message is based on the importance of framing activities and campaigns in a way that is closely aligned to the ‘intrinsic' values that inherently promote sustainable lifestyles. For example, an environmental campaign that encourages supporters to buy merchandise is likely to stimulate the same consumerist values that lead to resource depletion and environmental degradation. And as recent history will verify, focusing on the financial benefits of protecting the environment or reversing climate change will most likely reinforce the dominance of the pro-market economic model that puts profit and economic growth before social or ecological concerns.

As a growing body of evidence now suggests: "Reliance on economic appeals matches the widespread misconception that people are primarily motivated by (economic) self-interest, and are not motivated to change unless some personal benefit is implicated. However, in doing so, an important, perhaps even more basic source of human motivation is overlooked: people are motivated to maintain a positive self-concept which can be achieved by acting in line with one's internal moral standards."

While such evidence might sound like common sense to many activists, a host of organisations (including social justice campaigners and environmentalists) are evidently still prone to framing their work in way that ultimately stimulates what psychologists refer to as ‘extrinsic values'. These values relate to self-advancement, material wealth, power and status - values that are unlikely to help address social and environmental crises that require collective action that transcends self-interest. Instead, fostering intrinsic values such as self-acceptance, empathy and concern for others and the environment can lead to much better outcomes over time that have lasting benefits for society and the natural world.

Although everyone holds a wide variety of both intrinsic and extrinsic values, studies show that intrinsic values appear far more prominent in people across diverse nations and cultures. Moreover, stimulating intrinsic values helps reinforce related values, while the promotion of extrinsic values has the opposite effect of suppressing values that are better for society as a whole. The research has obvious implications for those engaged in creating a more just, compassionate and sustainable world, spurring concerned citizens to recognise that we have a common interest in cultivating intrinsic values through our collective activities.

However, as environmentalist George Monbiot remarked after reading Common Causes' initial report in 2010, we have been fighting a losing battle for many decades. He writes: "By changing our perception of what is normal and acceptable, politics alters our minds as much as our circumstances. Free, universal health provision, for example, tends to reinforce intrinsic values. Shutting the poor out of healthcare normalises inequality, reinforcing extrinsic values. The sharp rightward shift which began with Margaret Thatcher and persisted under Blair and Brown, all of whose governments emphasised the virtues of competition, the market and financial success, has changed our values."

The impact of governments promoting extrinsic values for more than 30 years is now very palpable. Armed with billions of dollars and given priority access to decision makers and the media, the corporate sector is also extremely efficient at churning out extrinsic values through commercial advertising and its influence over politicians, democracy and society. Multinational corporations are by now extremely adept at employing the latest psychological research to promote the highly profitable values that serves them best: power, self-interest and wealth generation.

Sharing as a global platform

Together, governments and the private sector have succeeded in moulding culture and society in line with extrinsic values, and they have reinforced the false assumption that human beings are predominantly selfish, individualistic and acquisitive. The longer people believe these manufactured assumptions about people and society, the more likely it is that these beliefs will shape social, economic and environmental policy. Hence the urgent need for citizens and organisations to actively promote intrinsic values and counteract these false perceptions.

As Common Cause state on their homepage; ‘to build a more sustainable, equitable and democratic world, we need an empowered, connected and durable movement of citizens'. It seems clear from their work that such a movement must be based on intrinsic values that are common to people across the world - something that STWR firmly recognises in our advocacy for policies based on the principle of sharing.

Sharing is a simple human behaviour that embodies a wide range of intrinsic values that Common Cause advocates for, and it has a broad appeal that spans generations and diverse cultures. At the same time, it is not hard to imagine how policies based on the principle of sharing can help create a more equitable, sustainable and democratic world. Clearly, policies of sharing and redistribution can reduce inequalities within and between countries. On an international level, an approach to economic policy based on sharing and cooperation would also have massive implications for the management of global resources in the best interests of all people. Furthermore, a call for sharing stands in contradistinction to the promotion of self-interest, acquisitiveness and individualism, while pointing to the need for an end to decades of economic injustice.

In light of the many ways that a focus on sharing could help promote intrinsic values and appeal to diverse groups, perhaps it warrants further attention from progressives as a potential platform for mobilising public opinion on a global scale.

Article: Values and the sharing economy
In order to stimulate further public engagement and activism on global issues, it is important for those promoting the sharing economy to place far...
Article: Global Sharing Day 2013: let's talk about food
The idea of sharing food has taken root in recent years as a response to our broken food systems, but does it make sense to talk about food sharing on a...
Blog: Imagining the ultimate global sharing day
The growing support for the sharing economy has the potential to change the way we understand and address the many challenges we face. But it is at the...
Blog: Connecting the dots in the sharing community
The sharing economy is becoming more popular than ever before with its emphasis on accessing and sharing resources rather than owning them. And now there...
Printer-friendly version