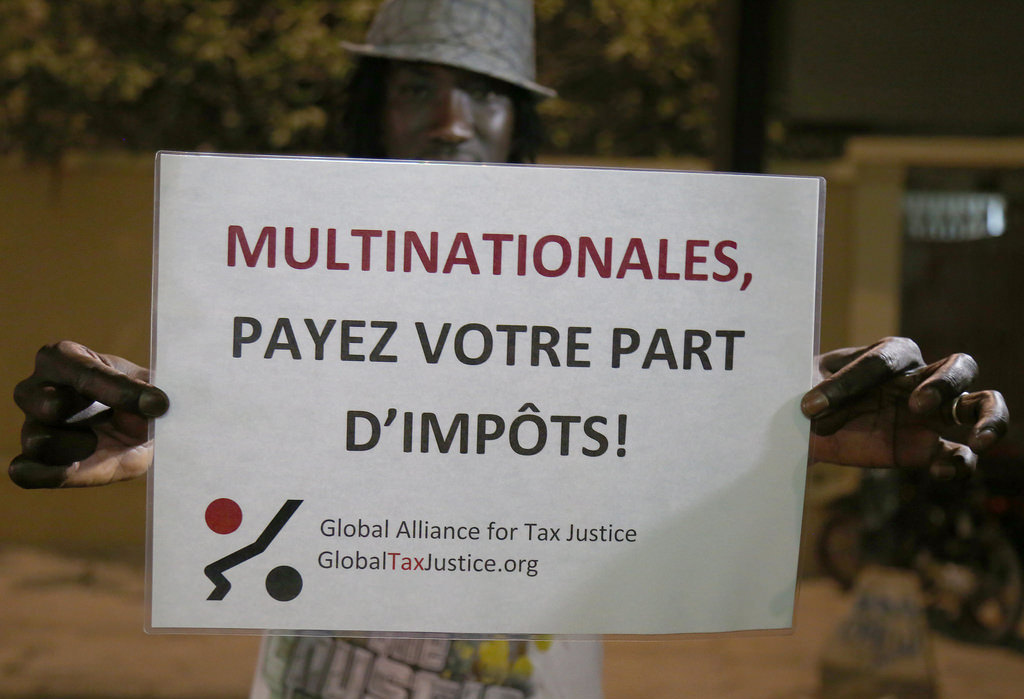 Campaigning activities are taking place across several continents this week during a global series of actions for tax justice, which aims to increase public pressure so that governments commit to making multinational corporations pay their fair share of taxes.

The Global Week of Action for #TaxJustice is continuing until Tuesday June 23 when many national coalitions will mobilise for World Public Services Day, and it coincides with the final round of negotiations for the UN Financing for Development conference (UN FfD) to be held in July. When governments meet in Addis, Ethiopia, to decide how to finance the Sustainable Development Goals, tax justice campaigners believe we have an historic opportunity to reshape the global tax system in the interests of the many, not the few.

The call for sharing that is embodied in civil society demands for tax justice could not be clearer: as The Global Alliance for Tax Justice states, there’s a huge need for fair tax revenues to reverse growing inequality, combat poverty and invest in public services, as well as fund sustainable development and address climate change. A growing movement of civil society organisations and activists are therefore united in campaigning for greater transparency, democratic oversight and redistribution of wealth in national and global tax systems.

In this latest wave of activities, campaigners are targeting both national-level decision makers as well as UN negotiators based in New York, highlighting how the global scandal of tax dodging robs countries around the world of billions in tax revenues. A central demand is for a new global tax body situated at the UN that would give developing countries a fairer say over international tax rules, as right now only 34 of the richest nations – represented in the Organisation for Economic Cooperation and Development – are drafting the standards that will underpin the global financial system. As a result, the poorest countries have the least influence in shaping the global tax regime despite the fact their citizens lose the most because of corporate tax dodging and illicit financial flows.

Two new reports released this week emphasise just how staggering is the extent of corporate tax abuse in both developing countries and the world’s richest nations. ActionAid reveal that Malawi, the poorest country in the world, has lost out on US$43 million in revenue over the last six years from just a single Australian mining company – money that could have paid for the annual salaries of 8,500 doctors or 39,000 teachers.

A groundbreaking report by Americans for Tax Fairness also reveals how Walmart has built a vast, undisclosed network of subsidiaries and branches in overseas tax havens that enable it to avoid paying billions in tax revenue, at the expense of low- and middle-income citizens across the world. These continuing scandals are just two more examples of how the whole international tax system is set up to benefit big businesses and rich countries, enabling them to “run rings around the tax rules which suit them”.

Progress may be disappointing and slow, as emphasised again this week by the European Commission’s new corporation tax action plan that makes no meaningful progress towards clamping down on tax avoidance. Civil society groups like Eurodad, Oxfam and ActionAid are unequivocal about the kind of coordinated measures that governments need to take, such as greater transparency, better reporting by multinational corporations, a global standard for the exchange of financial information between governments, as well as a representative tax body that can ensure such practical solutions are effectively implemented. As Oxfam say in their campaign for a World Tax Summit, it’s not too late to make world leaders change their ways - but it’s going to take a massive mobilisation of civil society to make truly ‘fair shares’ in taxation one of the highest priorities on their agenda.