World military spending rises to a hefty $2.0 trillion despite UN pleas for cutbacks 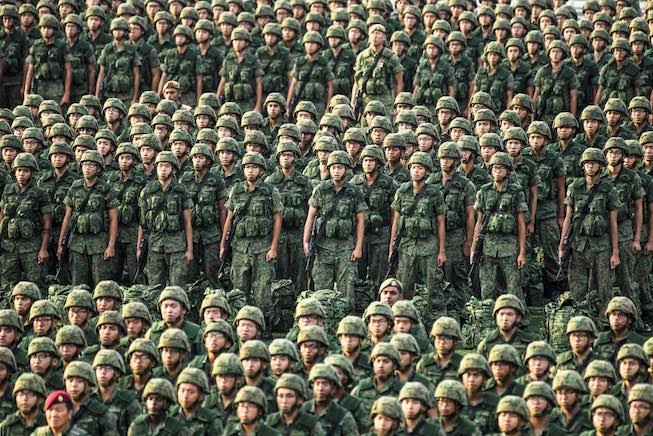 The latest figures of rising arms expenditures by some of the big powers makes a mockery of the UN’s longstanding pleas for cutbacks and diversion of funds from the military into sustainable development, writes Thalif Deen for IPS news.

The United Nations which is desperately seeking funds to help developing nations battling a staggering array of socio-economic problems, including extreme poverty, hunger, economic inequalities and environmental hazards– has continued to be one of the strongest advocates of disarmament.

The world body has relentlessly campaigned for reduced military spending in an attempt to help divert some of these resources into sustainable development and humanitarian assistance.

But according to a new report released April 26 by the Stockholm International Peace Research Institute (SIPRI), world military expenditure rose to nearly $2 trillion in 2020, an increase of 2.6 percent, in real terms, from 2019.

The COVID-19 pandemic, which brought the world to a virtual standstill for the last 14 months, apparently has had no impact on military spending.

Military spending by China, which is currently in a new Cold War with the US, grew for the 26th consecutive year.

The latest figures of rising arms expenditures by some of the big powers makes a mockery of the UN’s longstanding pleas for cutbacks and diversion of funds from the military into sustainable development.

William D. Hartung, Director, Arms and Security Program at the Washington-based Center for International Policy told IPS: “At a time when a global pandemic, climate change, and racial and economic injustice pose the greatest risks to human lives and livelihoods, the increase in global military expenditures in 2020 marks a dismal failure by policymakers across the world to address the most urgent challenges we face”.

He argued that even a fraction of. the nearly $2 trillion spent on the military last year could have gone a long way towards sustainable investments in public health, environmental protection, and combating inequality.

“World leaders can and must do better,” said Hartung.

The UN Office for Disarmament Affairs (UNODA) points out that over the past century, governments have sought ways to reach a global agreement on reductions in military expenditures. Various proposals were discussed in the League of Nations, and later in the UN. Early proposals in the UN focused on reducing the expenditures of States with large militaries, and on freeing up funds for development aid.

“But proposals for cutting military spending did not materialize,” says UNODA. However, they led to the development of the UN Standardized Instrument for Reporting Military Expenditures in 1981—later renamed United Nations Report on Military Expenditures (MilEx)—under which countries are encouraged to report on their military expenditures.

Dr. Natalie J. Goldring, a Senior Fellow and Adjunct Full Professor with the Security Studies Program in the Edmund A. Walsh School of Foreign Service at Georgetown University, told IPS “the latest military spending data from SIPRI are difficult to reconcile with the reality of the world we live in today”.

In a year in which the global community was dealing with the horrors of the Covid-19 pandemic, SIPRI’s data show that military spending continued unabated. Military spending increased in nine of the 10 countries with the highest military expenditures, she pointed out.

“Unfortunately, the United States continues to lead the world in military spending, accounting for 39 percent of the global total,” said Dr Goldring, who is Visiting Professor of the Practice in Duke University’s Washington DC program and also represents the Acronym Institute at the United Nations on conventional weapons and arms trade issues.

According to SIPRI’s data, that’s more than the rest of the top 10 military spenders combined. And It’s more than twice the total of the countries which are most commonly perceived by US policymakers as its main military competitors, Russia and China, she added.

Dr. Alon Ben-Meir, professor of international relations at the Center for Global Affairs at New York University, told IPS it is indeed ironic that four of the five permanent members of the UNSC are the largest military spenders.

Needless to say, he noted, the key to reducing military budgets is directly connected to the level of tension between the various countries.

“I do not expect any serious discussion about world disarmament unless many of the consuming conflicts are resolved, and in particular the growing, rather than diminishing, tension between the United States, Russia, and China,” Dr Ben-Meir declared.

‘The recent increases in US military spending can be primarily attributed to heavy investment in research and development, and several long-term projects such as modernizing the US nuclear arsenal and large-scale arms procurement,’ said Alexandra Marksteiner, a researcher with SIPRI’s Arms and Military Expenditure Programme.

Meanwhile, China’s military expenditure, the second highest in the world, is estimated to have totalled $252 billion in 2020. This represents an increase of 1.9 per cent over 2019 and 76 per cent over the decade 2011–20. China’s spending has risen for 26 consecutive years, the longest series of uninterrupted increases by any country in the SIPRI Military Expenditure Database.

In an open letter to Secretary-General Antonio Guterres last September, the Berlin-based International Peace Bureau called for world disarmament and the reduction of global military spending.

“We write to you on behalf of the International Peace Bureau and more than 11.000 signatories to express our support for your call for a global ceasefire. We would also like to emphasize the need for (nuclear) disarmament and the reallocation of money from the military to healthcare, social, and environmental needs – to the fulfilment of the Social Development Goals.”

This pandemic has also made clear that states need to re-prioritize their spending. While many of the problems raised by the pandemic could have been at least partially solved, it was the lack of funding which hindered it, the letter declared.

Last month, the United Nations was hoping to raise soma $3.85bn from more than 100 governments and donors at a virtual pledging conference. The funds were meant to avert widespread famine in the world’s worst humanitarian crisis in Yemen.

But the total pledges amounted to only $1.7bn – less than half – in what the UN secretary general described as a “disappointing outcome”. “Millions of Yemeni children, women and men desperately need aid to live. Cutting aid is a death sentence,” António Guterres said in a statement.

In its latest study, SIPRI said even though military spending rose globally, some countries explicitly reallocated part of their planned military spending to pandemic response, such as Chile and South Korea. Several others, including Brazil and Russia, spent considerably less than their initial military budgets for 2020.

‘We can say with some certainty that the pandemic did not have a significant impact on global military spending in 2020,’ said Dr Diego Lopes da Silva, Researcher with the SIPRI Arms and Military Expenditure Programme. ‘It remains to be seen whether countries will maintain this level of military spending through a second year of the pandemic.’

Dr Goldring pointed out that in 2020, approximately 1.8 million people around the world died of covid. SIPRI’s military spending figures suggest that the countries with the highest military expenditures decided that business as usual was the correct direction to follow, despite the covid pandemic.

“This is a time for reevaluating priorities. Countries should be giving priority to the health and welfare of their people, rather than continuing to fund the military-industrial complex. Cutting military spending would free funds for human needs and sustainable development.”

“The UN has suggested diverting funds from military expenditures to fund sustainable development. But in reality, this isn’t a question of diverting funds – it’s devoting them to what they should have been allocated to in the first place.”

“In the early days of his Administration, President Biden has not shown an inclination to reverse the United States’ excessive military spending patterns. He is proceeding with expensive new nuclear weapons and continuing to propose bloated military budgets.

There’s still time to reevaluate this approach, restructure US military spending, and focus on human needs. Cutting the military budget would also free US financial resources to help deal with the urgent global problems of the covid pandemic and the climate crisis.”

“More than a decade ago, then UN Secretary-General Ban Ki-moon said, “The world is over armed, and peace is underfunded.” Unfortunately, this statement continues to be true.”

Thalif Deen is the author of the newly-released book on the United Nations titled “No Comment – and Don’t Quote Me on That.”

Filed under:
War and conflict