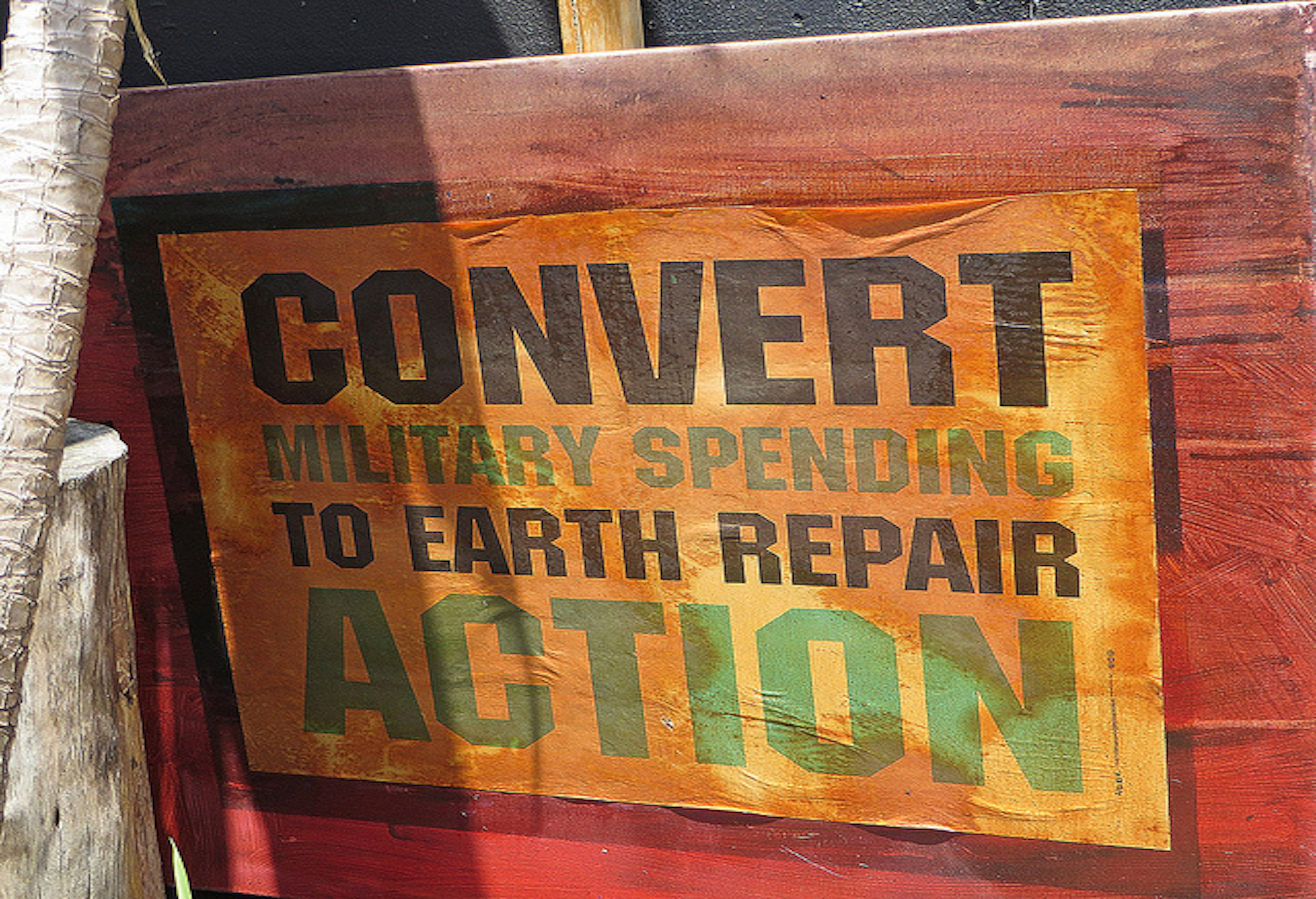 We need a deep rethinking of how we prioritize and respond to security threats. If we want a healthy Earth, justice, peace, and democracy, we need a 21st-century security agenda that addresses the causes of contemporary conflicts, encourages cooperation and diplomacy, and supports every person in their quest for a healthy and dignified life, writes David Korten.

The recent 15th anniversary of the September 11, 2001, terrorist attacks on the World Trade towers was a reminder of the terrible consequences when a nation ignores the lessons of history—including its own recent history. The U.S. military budget is a tragic example.

We currently spend roughly $598 billion on defense, which is more than the next seven biggest military spenders combined: China, Saudi Arabia, Russia, the United Kingdom, India, France, and Japan. This represents 54 percent of federal discretionary spending. In return, we get an ability to rapidly deploy conventional military power anywhere in the world.

The 9/11 attack on the World Trade Center was the most devastating foreign-sourced attack on the United States since the War of 1812. It was carried out by a largely self-organized band of 19 religious fanatics of varied nationalities, affiliated with a small, dispersed, and loosely organized international network. We responded by invading and occupying Afghanistan and Iraq. This led to hundreds of thousands of pointless deaths, destabilization of the Middle East, and a cost to the U.S. Treasury of some $4 trillion to $6 trillion.

I view all this in part through the lens of my experience as an Air Force captain during the Vietnam War. I briefed pilots headed for Vietnam on the psychological consequences of bombing civilian populations. I later served in the Defense Department’s office overseeing defense-related behavioral and social science research.

The available research on the psychological consequences of bombing was clear and predictable: It unifies the civilian population, just as 9/11 unified the U.S. population. The same is true for mass military operations against dispersed combatants who blend in with and are indistinguishable from civilian populations. Conventional military operations work only when there are clearly identifiable military targets that can be hit with limited collateral harm to civilians.

The United States bears no risk of invasion by a foreign military force. And the terrorist threat, which comes from bands of loosely affiliated political extremists, is substantially overblown. Furthermore, it is fueled by the much greater security threats created by environmental abuse, global corporate overreach, and the social divisions of extreme inequality. Under circumstances of growing physical and social stress from environmental devastation and inequality, politics easily turns violent. Violence is all the more certain when people feel deprived of alternative avenues to express their rage at being deprived of a dignified means of living.

This all suggests we need a deep rethinking of how we prioritize and respond to security threats. The greatest threat to national and global security is climate destabilization. That threatens our long-term survival as a species; in the short term, it threatens livelihoods, which exacerbates desperation and violence. Investing in a massive effort to quickly get off fossil fuels and onto renewable energy needs to be our first security priority. We must also recognize that poverty and joblessness fuel the conflicts we hope to resolve.

If we want a healthy Earth, justice, peace, and democracy, we need a 21st-century security agenda that addresses the causes of contemporary conflicts, encourages cooperation and diplomacy, and supports every person in their quest for a healthy and dignified life.

We must press at home and abroad for political and economic reorganization that advances democracy and enables all people to pursue a decent means of living in harmony with the living Earth. Scaling back dependence on fossil fuels, the power of global corporations, the international arms trade, and the grotesque inequalities within and between nations need to be high on our list of security priorities. This will lead to dismantling the costly obsolete war machinery of the 20th century.

The leadership in formulating and advancing a 21st-century security agenda will not come from 20th-century institutions forged by global military conflicts and global competition for a dwindling resource base. It must come from the bottom up, from the people who are living a 21st-century vision into being.

Report: Financing the global sharing economy, part three (3): divert military spending
This section of the report Financing the Global Sharing Economy demonstrates how governments could redirect the colossal financial resources currently...
Article: The new economy: A living earth system model
In this thinkpiece for The Next System Project, David Korten sets out his 'natural case for sharing'. No-one has a right to own or control, for his or her...
Page: Conflict over resources
As nations struggle to secure the world’s untapped natural resources, humanity is faced with an unavoidable choice: either to find ways of equitably...
Printer-friendly version