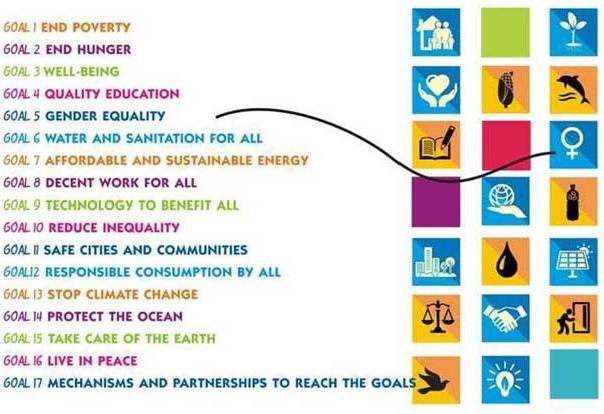 The United Nations, in a new report to be released next month, has warned “there is no escaping the fact that the global landscape for the implementation of the 17 Sustainable Development Goals (SDGs) has generally deteriorated since 2015, hindering the efforts of governments and other partners”

And the commitment to multilateral cooperation, so central to implementing major global agreements, is now under pressure, says the 35-page report, due to be released ahead of the upcoming high-level political forum (HLPF) of the Economic and Social Council (ECOSOC), July 9-18.

The reasons for the roadblocks include a spreading economic recession, a decline in development aid, the diversion of funds into humanitarian emergencies, the widespread military conflicts, the growing economic losses from natural disasters, the downsizing of operations by cash-strapped UN agencies, the rise of right-wing governments and the increasing challenge to multilateralism, among others.

The study says “it is cause for great concern that the extreme poverty rate is projected to be 6 percent in 2030, missing the global target to eradicate extreme poverty while hunger is on the rise for the third consecutive year.”

At the same time, biodiversity is being lost at an alarming rate with around one million species already facing extinction, many within decades while green-house gas emissions continue to increase.

Additionally, the required level of sustainable development financing and other means of implementation are not yet coming on stream and institutions are not strong or effective enough to respond adequately to these massive inter-related and cross-border challenges.

On gender empowerment, it says women represent less than 40 percent of those employed, occupy only about a quarter of managerial positions in the world, and (in a limited set of countries with available data) face a gender pay gap of 12 percent.

About a fifth of those aged 15 to 49 experienced physical or sexual-partner violence in the last 12 months.

“There is simply no way that we can achieve the 17 SDGs without achieving gender equality and empowering women and girls,” the study declares.

Asked for his reaction, Jens Martens, director of the Global Policy Forum and coordinator of the Civil Society Reflection Group on the 2030 Agenda, told IPS: “The new UN report is a wake- up call to governments—and it clearly shows that most governments have failed to turn the proclaimed transformational vision of the 2030 Agenda into real policies”.

“We agree with the assessment that the commitment to multilateral cooperation is now under pressure. Even worse, national chauvinism and authoritarianism are on the rise in a growing number of countries,” he added.

But despite these gloomy perspectives, there are signs of change, said Martens.

In response to the failure or inaction of governments, world-wide social movements have recently emerged, mainly with young people and women in the lead.

The UN report clearly shows, that structural transformation is more needed than ever before. It requires strengthening bottom-up governance and governance coherence.

At global level, he said, the upcoming review of the High-Level Political Forum next month should be used to overcoming the weakness of this body and transform it to a Sustainable Development Council.

Martens said enhancing governance coherence requires to give those institutions which are responsible for the implementation of the 2030 Agenda and the SDGs, the necessary financial resources and effective political and legal instruments.

At global level this requires to changing the recent course of relying on non-binding instruments and corporate voluntarism.

The SDG Summit, scheduled to take place at the United Nations September 24-25, and equally important, the 75th anniversary of the United Nations in 2020, will provide important opportunities to translate the calls of the emerging global movements for social and environmental justice into political steps towards a new democratic multilateralism, he added.

Chee Yoke Ling, Director of the Third World Network, told IPS the world is very far from meeting the sustainable development commitments, including the targets set under the Convention on Biological Diversity for the period 2011 to 2020, the Aichi Targets, that are integral to the SDGs.

There are promises of implementation, especially new and additional funding, that is a legal obligation of developed countries in various multilateral treaties, she added.

“The global cooperation forged in the 1992 Rio treaties on biodiversity, climate and combatting desertification were rooted in the principle of equity and common but differentiated responsibilities between developing and developed countries.”

She said 27 years later, multilateralism is under attack, with an erosion of all these principles and commitments.

“The Trump Administration is pushing the world into economic protectionism, while the resources of developing countries are now facing a new level of siphoning through digitalization,” she added.

From personal data to gene sequence information, a handful of transnational corporations once again seek aggressively to claim private property rights for profit, she warned.

Meanwhile, on relatively positive note, the report points out that progress is being made and some favorable trends on SDG implementation are evident.

Extreme poverty and child mortality rates continue to fall. Progress is being made against diseases such as hepatitis, where the incidence of new chronic HBV infections has been reduced considerably.

Certain targets regarding gender equality are seeing progress such as implementing gender responsive budgeting. Electricity access in the poorest countries has begun to increase.

Globally, labour productivity has increased and unemployment is back to pre-financial crisis levels. The proportion of the urban population living in slums is falling.

Still progress has been slow on many SDGs, “that the most vulnerable people and countries continue to suffer the most, and that the global response thus far has not been ambitious enough.”

Roberto Bissio, coordinator of Social Watch, told IPS the UN report does not mention that, according to its estimates, poverty is actually increasing in Sub-Saharan Africa, where nine out of ten people in extreme poverty will be living in 2030.

A closer look at the income growth of the bottom 40 and the national average, shows that for more than one third of the countries with data, the difference was of less than 0.5 percent, which rounds up to zero, considering the margin error of these measures.

Further, in one third of the countries, income of the bottom 40 actually decreased, making the poor poorer. In many of them the national average decreased even more, said Bissio.

“While the UN Secretariat is to be commended for looking at the issues that really matter (like the scandalous growth of the income of the top 1 percent), the UN bodies that form the Inter-agency and Expert Group on Sustainable Development Goal Indicators (IAEG-SDGs) should take due note and re-formulate the framework they concocted in a way that is actually useful”.

The 2030 Agenda is explicit in mentioning that all countries should take action towards sustainable consumption and production (SDG 12), “with developed countries taking the lead”.

The Progress Report quotes UNEP’s “Global Resources Outlook 2019” per capita average global figure of 12 tons of resources extracted per person in 2015 (up from 8 tonnes in 1990), but it fails to mention what the Outlook says in the following paragraph: “High-income countries consume 27 tons of materials (per capita) on average, which is 60 per cent higher than the upper-middle countries and more than thirteen times the level of the low-income group (at two tons per capita).”

By only providing global average figures, the Progress Report hides the responsibility of developed countries in current global un-sustainability instead of encouraging them to take the lead.

Blog: The politics of ‘progress’: UN report paints a highly partial picture of SDG implementation
The recent Progress Report on the UN’s Sustainable Development Goals (SDGs) paints a skewed and misleading picture about how SDG implementation is...
Blog: “We don't need 'trillions' to achieve the SDGs”
Civil Society activists critique the first week of deliberations at the High-level Political Forum on Sustainable Development, by the Global Policy Forum.
Article: Two years into the SDGs - neoliberalised development?
By removing all discussions about power from their agenda, the SDGs reinforce the status quo of socio-political relations, writes Katerina Gladkova for...
Report: Heralding Article 25: A people's strategy for world transformation
After so many years of political inaction only the massed goodwill of ordinary people can bring about an end to poverty in a world of plenty through...
Report: Beyond the Sustainable Development Goals: Uncovering the truth about global poverty
The Sustainable Development Goals – despite their positive and progressive rhetoric – by no means constitute a transformative agenda for meeting the basic...
Printer-friendly version