After the great Piketty debate 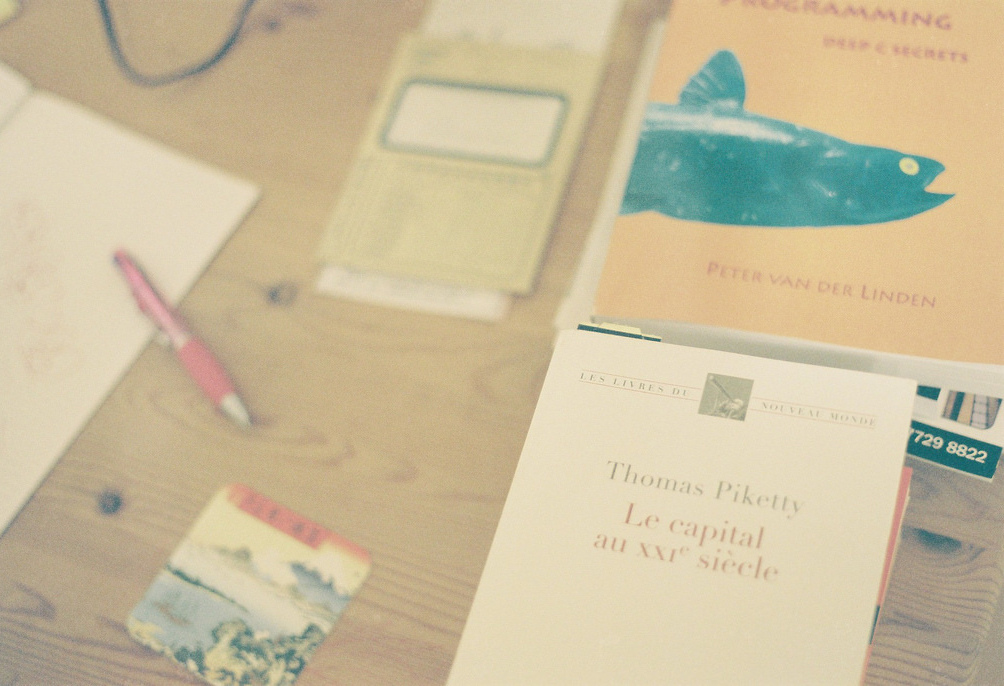 If de-growth on a global level is inevitable sooner or later – and there is enough evidence to suggest that it is – then the implications go far beyond Piketty’s solutions for how we can achieve a just and sustainable world.

The following article was originally published as an editorial in the November-December 2014 edition of Solutions Journal.

The year 2014 may be seen as a turning point in the public debate on inequality, which is in large part thanks to Thomas Piketty’s best-selling book Capital in the Twenty-First Century.[1] There is no doubt that Piketty’s tome of analysis has done a great service for progressives, in that it uses comprehensive data sets to discredit the prevailing economic ideology of our time.[2] It is no longer just common sense to presume that extreme wealth is not good for everyone, and that the invisible hand of the free market will never lead to a fairer sharing of wealth among the population.

However, many questions remain about Piketty’s blanket solution of a global tax on wealth, which he firmly places within the context of a market-dominated and consumer-driven economy. While such a tax may constitute a rational response to the continuing upward redistribution of wealth and income in advanced capitalist economies (even if it is a “usefully utopian idea”, as Piketty himself admits),[3] it proposes merely reform and nothing to change the source of systemic inequality.

Many critics of Piketty’s book have pointed out that the surest path to reversing inequality within countries is through strategies that create a better distribution of capital in the first instance, rather than relying on top-down, quick-fix and state-centric strategies afterwards.[4] In other words, it’s more effective to address the distribution of wealth at its source, including through changes in institutions and policies to make pre-tax income distribution less unequal.

This will inevitably demand the collective organisation of labour, the protection of workers’ rights, and new ways for capital to be owned broadly by the populace – such as a dramatic ramping up of participatory ownership through cooperatives.[5] These people-driven solutions point towards the shifts in power that are needed to create truly egalitarian societies, although this is a subject that Piketty leaves largely unaddressed.

By far the greatest blind side to Piketty’s analysis, however, is his failure to take seriously the ecological limits to growth.[6] It is clear that he defends the free market and the idea of perpetual economic growth, since his proposal for a global wealth tax assumes that wealthy countries will continue to grow at a rate of 1.2 percent (with a global growth rate of up to 5 percent). Nowhere in the book does he admit that infinite growth is unsustainable on a planet with finite resources, a position which is now conventional wisdom for many scientists,[7] environmental activists,[8] and civil society organisations.[9]

If de-growth on a global level is inevitable sooner or later – and there is enough evidence to suggest that it is – then the implications go far beyond Piketty’s solutions for how we can achieve a just and sustainable world.[10] When the pie cannot be grown any larger to share it out, much more serious questions of distribution arise given the planetary boundaries that economies are already hitting hard.[11] As succinctly put by Herman Daly: “is not the solution to poverty to be found in sharing now, rather than in the empty promise of growth in the future?”[12]

To be sure, we cannot grow our way into a vision of prosperity for all that replicates the North American or Western European standard of living worldwide. Which leaves us with only one option: to share the world’s wealth and resources more equitably among everyone, within the constraints of ‘one planet living’. But unfortunately, this is not the conversation that has been spurred by Piketty’s analysis which spends only a few pages talking around climate change and the ‘end of growth’ question, and in no way connects the dominant consumption-led growth model to the extreme social and environmental crises of today. As a result, his remarkably popular book has done little to help the general public embrace the radical transformations that will be required in the transition to a post-growth world.

There is much cause for optimism, however, as more and more engaged citizens and intellectuals are participating in this crucial debate over how to reimagine the economy as something different that escapes the growth compulsion, and in a way that is compatible with both social justice and ecological limits. This was particularly evident at the Degrowth movement’s fourth conference in September, which attracted an international audience of more than 2,700 people.[13] Although no-one has all the answers for exactly how a zero-growth world will function, a great amount of thinking has now been done on what such a world will look like,[14] and how genuinely shared prosperity can be achieved without causing economic collapse.[15]

Piketty is certainly correct that part of the answer lies in effective progressive taxation, in which corporations and rich individuals must pay their rightful share.[16] But we also need to rethink the entire edifice of capitalist economics, in which growth is the primary objective of all policy.[17] This demands solutions that lie outside of Piketty’s neoclassical and Keynsian worldview, despite being long discussed among heterodox economists and the progressive community at large. At the least, it means that we will have to reconsider the culture of consumerism, fundamentally rethink the paradigm of globalisation and free trade, and reinvest in our local economies and communities. All this depends on a shift in values towards quality of life and wellbeing, a new ethic of ‘sufficiency’,[18] and what Charles Eisenstein has called a “diversification in the modes of human sharing”.[19]

There is also no escaping the fact that a just transition will have to be managed and coordinated globally, with rich countries radically downscaling their resource and energy demands in order to clear the ecological space for those who need it. Considering that we already require one and a half planets to support today’s consumption levels,[20] a popularisation of the idea of ‘fair Earthshares’ is long overdue. For how much longer can we continue on a path of highly inequitable and over-development, while two-thirds of the world’s population – mostly in the Global South – still live in relative or absolute poverty? Clearly, the majority poor also have a moral claim to their fair share of the Earth’s resources, which means they urgently require economic growth for the basic necessities of life – such as schools, housing, hospitals, basic infrastructure, and decent jobs.

There is much to admire in the great Piketty debate, which has strongly resonated with a disillusioned public who are struggling to understand the causes of inequality in an age of austerity. Yet the very premises of this debate are mired in outmoded economic assumptions and orthodoxies, and hence it fails to ask the right question: which is not how to restart the growth machine, but how to live more sustainably and equitably without it. For the moment, this renewed focus on inequality is a hopeful sign that the momentous discussion on global sharing is finally beginning to reach a mainstream audience. But it surely won’t be long before public opinion is forced to consider a post-growth, and thus post-Piketty vision of how to create an equal and balanced future for all.

[4] Shaheen, F. Inequality: it will take more than bestsellers to break the spell. Neweconomics.org [online] (May 2, 2014). www.neweconomics.org/blog/entry/bestseller-to-breakthrough-whats-keeping....

Blog: Debating the degrowth alternative
Giorgos Kallis, a prominent scholar on ‘degrowth’, recently wrote an essay that was the subject of debate among members of the Great Transition Initiative...
Article: Sharing a (not so) living planet
As the further evidence comes to light of how our economic systems are decimating the natural world, sharing is fast emerging as the central theme in the...
Page: Sharing the global commons
Guaranteeing everyone access to essential goods and services will not be enough to create a just and sustainable world. Governments also need to rethink...
Blog: Advocacy at the UN for a commons-based vision of sustainable development
Civil society groups at the United Nations are highlighting a powerful new movement in our midst based on caring, sharing, community and cooperation - and...
Article: Commons transition: STWR interviewed by the P2P Foundation
As part of a series of interviews highlighting the need for a 'commons transition', STWR's Rajesh Makwana was asked about the ethic and practice of...
Printer-friendly version