On seed freedom and sharing 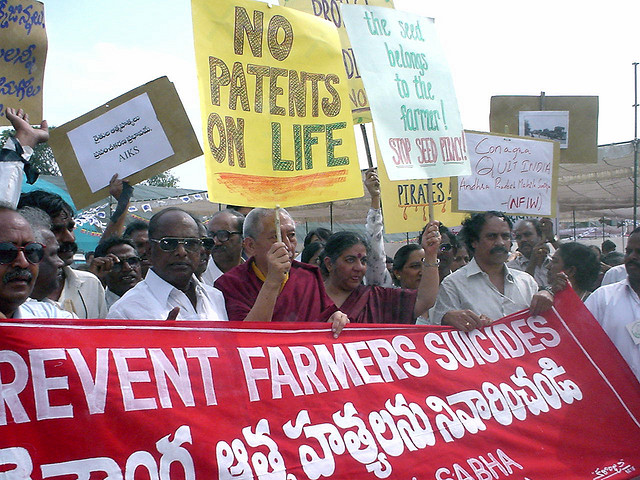 The seed freedom movement is an inspiring example of how the principle of sharing is central to resolving the crisis in agriculture, and highlights the urgency of resisting the powerful agribusinesses that seek to eliminate biodiversity and criminalise the saving and sharing of seed.

It was a pleasure to attend an event held this weekend in central London at the Nehru Centre, the cultural wing of the High Commission of India, where Dr Vandana Shiva was in conversation with Satish Kumar. The event was organised by the Gaia Foundation and Resurgence/Ecologist Magazine under the theme ‘seed freedom', and followed the release last year of the short film ‘Seeds of Freedom' as well as a series of international actions held throughout 2012. This included the Seed Freedom fortnight of action in October 2012 that made an international call to 'Occupy the Seed', at which time ‘The Global Citizens' Report for Seed Freedom' was released by Navdanya and a large coalition of grassroots organisations - a huge 340-page compendium of information that sets out what is at stake in the battle for seed sovereignty, and the way forward as embodied in the ‘Declaration on Seed Freedom'.

Satish Kumar set the scene about why seed freedom is such an important movement that is much broader than any single ecological or social justice issue because, indeed, the seed is part of our very origin and the source of our wellbeing. Yet in an age of industrial-scale agriculture and highly subsidised, high-input farming methods based on monocultures and a uniformity of production that goes against the natural cycles and wisdom of nature, we have become alienated from food and lost contact with this sacred gift of the universe. When we lose contact with the soil, said Satish, then we also lose contact with the amazing miracle of the seed. And then we lose our humility and respect for the divine incarnation that is the seed, as reflected in the contemporary approach to farming across the world. We want to grow food without getting our hands dirty; we see peasants and those who work on the land as simple and backwards; and we uphold a highly centralised system of agriculture that is at the root of world hunger. We remain complicit with this destructive food system even though it is, in Satish's words, "a complete nonsense" that industrial farming can feed the world.

From monopolies to commons

Vandana Shiva gave a compelling, inspiring and personal talk on how she first became involved in the issues of ecological farming and seed sovereignty. This grew out of her involvement in the 1980s with the world forestry movement,  which became a training ground for her in the vagaries of agribusiness and the battle that was emerging for control over the world's food supply. For the proponents of genetically modified seeds like Monsanto, the timeless tradition of farmers saving and sharing seeds is ‘the problem', hence the solution for corporate agribusiness is to prevent this age-old practice from continuing - even if the eventual result for humanity could prove disastrous. GMO more accurately stands for ‘God Move Over', said Vandana, because Monsanto and others are trying to play like God in their pursuit of maximum profit and control over the earth's resources.

As Vandana eloquently explained in her no-nonsense manner, the "biggest corporate takeover of the planet" starts with the commercialisation of the seed. Repeating an oft-quoted phrase, she said that when you control food you control the people - but when you control the seed, you control life. There can be no greater source of profit than the privatisation of life itself in the form of the humble seed, which major agribusiness corporations are pursuing with ever increasing vigour through patenting laws, the rules of the World Trade Organization, relentless marketing and disinformation campaigns, the coercion and bullying of independent scientists who show up the fallacy of GMO research, and any other avenue that can further their attempts to criminalise and eliminate biodiversity. Even though, as Vandana put it, diversity is the very nature of life, of freedom and democracy, whereas food production based on uniformity and control is pushing the world's food systems towards a strange sort of fascism. The consequences are already devastating, not least for the millions of small farmers across India that have committed suicide as a result of corporate seed control and indebtedness.

The solution to the seed and agricultural crisis is, in essence, so simple and straightforward, as both Satish and Vandana made clear: to not accept the privatisation of life, to defend the commons, to support local agriculture and organic food, to boycott GMO food products, to promote the localisation of our food systems and, most of all, to uphold seed freedom and oppose the laws imposed for seed slavery and seed dictatorship worldwide. Vandana mentioned the IAASTD study that spent four years and involved 400 experts on the questions of global agriculture, hunger, poverty, power and influence, and concluded that a complete change of direction is needed towards food sovereignty and agro-ecological farming methods. The evidence is already clear: industrial agriculture in its current form has no place in a sustainable and equitable future for humanity.

This environmentally destructive, undemocratic and moribund model of farming is pushing the world towards great catastrophe and violence. And it's continued survival is only ensured by the massive subsidies that prop up this so-called ‘modern' style of agriculture that comes with such huge financial and health costs. As Vandana pointed out in a question and answer session, the EU's Common Agricultural Policy (CAP) alone is almost half of the EU's entire annual budget. If those billions of dollars were instead spent on urgent social needs then we could not only reverse austerity policies, but also start building a fair and sustainable model of farming - a common-sense argument that we also made in part 6 of STWR's recent report on ending support for agribusiness.

The seed freedom movement is an inspiring example of how the principle of sharing is central to resolving the crisis in agriculture. For millennia, the saving and sharing of seeds was an intrinsic part of the life of agricultural communities everywhere. The Global Citizens' Report for Seed Freedom explains how the sharing of seed exemplifies a way of life and a worldview that reverences other life forms, and sees the farmer as custodian and steward of the rich diversity of nature. Seed sovereignty has been increasingly undermined since the 1930s, however, until the right of farmers to save and share seed is deemed a crime under the Intellectual Property Right (IPR) laws that are being pushed through the World Trade Organisation (WTO) and other fora. Under this ‘biopiracy regime', the gifts and genetic wealth of nature is being converted into private gain through intellectual property right claims.

But small farmers and engaged citizens are fighting back, defending the right to save and share seeds, and promoting a new worldview that embraces community ownership, common property resource management, and the equitable sharing of scarce resources for the common good of all communities. It may seem as if we have gone too far now within the current globalised food system based on privatisation, monopolisation and the principle of exclusion rather than sharing, but Vandana Shiva points out that the ‘space for freedom' is still far greater than the ‘space for dictatorship'. It is never too late to do the right thing, she says, however dramatic the implications may be in restoring the tradition of sharing, cooperation and democratic decision-making to our food systems. We have to decide if the world we live in is determined by a handful of corporations that control the resources of the earth, or one in which everyone has an equal right to share the earth's resources, as well as an equal duty to protect nature's limited (but generous!) wealth for future generations.

Report: Financing the global sharing economy, part three (6): end support for agribusiness
Section 6 in part 3 of the report Financing the Global Sharing Economy demonstrates how shifting subsidy support away from agribusiness in OECD countries...
Article: Has the world given up on sustainable development?
Following the latest weak outcome of the Commission on Sustainable Development, it is time to ask if the United Nations is achieving enough in the realm...
Article: The world seed conference: good for farmers?
Rather than a push for techno-fixes and tightened intellectual property rights that characterised the recent World Seed Conference, we need a new paradigm...
Article: Food security & agriculture: an overview
The escalating crisis of volatile food prices and food insecurity is the result of an industrial development model based on large-scale, export-orientated...
Printer-friendly version