A reflection on Pope Francis’ clarion call to #sharetheplanet 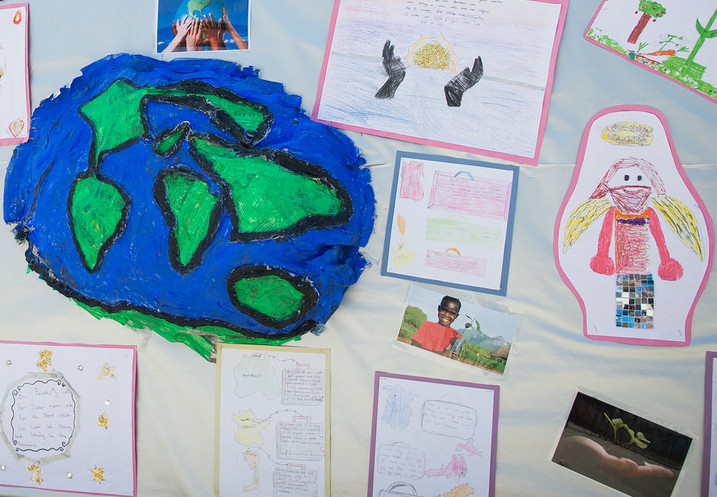 The Catholic Church has embraced a radical position on sharing the world’s resources, one that we would all do well to heed and ponder. But the real significance of Laudato Si’ is its powerful message on the centrality of ending poverty for healing the wider crises of climate change and environmental degradation.

Since the long-awaited papal encyclical ‘on care for our common home’ was published on the 18th June, progressives and campaigners of all types have enthusiastically hailed Pope Francis’ latest teaching – and for good reason. The diverse causes championed in this compelling 180-page treatise could fill an activist’s manifesto, on everything from agroecology to degrowth economics, fossil fuel divestment and global monetary reform. Many progressive writers have remarked upon the Pope’s extraordinary critique of neoliberal capitalism, and his paradigm-shifting vision of human progress beyond consumption-driven economic growth. Not only has the Catholic Church now officially embraced the environmental crisis as the most pressing issue of our time, but it has also called for a dramatic overhaul of the global economy in order to put people and the planet before transnational corporate interests.

Less mentioned, however, is the Pope’s central focus on sharing as a solution to the interconnected global crises of climate change, inequality, resource conflicts and unsustainable consumption patterns. From the very outset, he frames his second encyclical letter in terms of the urgent challenge to protect our common home, the Mother Earth, that we all share with every other living being (1, 13). “Whether believers or not,” he writes, “we are agreed today that the earth is essentially a shared inheritance, whose fruits are meant to benefit everyone” (93). This basic framing then extends to a broad political and economic analysis on the need for a more equal international economy that respects planetary boundaries, as outlined in a section titled simply ‘Global inequality’.

Pope Francis first decries the present model of global resource distribution, in which a minority of affluent citizens believe they have “the right to consume in a way which can never be universalised, since the planet could not even contain the waste products of such consumption” (50). The responsibility of rich countries to address their “ecological debt” to less developed countries is then expounded upon, with an acknowledgement of “differentiated responsibilities” in addressing climate change. Citing the general policy implications in no uncertain terms, nations are urged to rectify these stark imbalances through resource transfers between the global north and south; the use of “environmental space” calculations for allocating certain remaining fossil fuel reserves throughout the world; and significant reductions in the consumption of non-renewable energy within developed countries.

In other words, the Church has made a clarion call for powerful nations to share the world’s resources more equitably and sustainably, based on a fundamental understanding that is far from mainstream political thinking: that “developing countries, where the most important reserves of the biosphere are found, continue to fuel the development of richer countries at the cost of their own present and future” (52).

A radical message on sharing

This is an undeniably radical message from such a historically conservative establishment, one that goes even further than previous encyclicals – such as those of Pope Benedict and John Paul II – which also provided an unequivocal critique of unbridled market forces and advocated, in various ways, for stronger regulation of the international economy and global forms of redistribution. Pope Francis draws extensively on the writings of earlier saints and pontiffs, although the tone and feel of his eloquent letter is decidedly down-to-earth and accessible, including the practical guidance to individuals (of relevance to laypeople as much as the religiously inclined) for how to live more simply and overcome the “utilitarian mindset” that defines the individualistic consumer culture of modern times (see chapter six).

So it’s no wonder that prominent climate activists like Bill McKibben and Naomi Klein are standing behind the Pope’s call to action, while many in the progressive community are saying he’s “right on the economics” as well as on the science of global warming. However what’s truly unique about Laudato Si’ is not its overall policy guidelines or the scathing analysis of market fundamentalism, but its deep concern for the poorest in society along with an underlying and passionate conviction: that the climate and inequality crises are inextricably interconnected. This can be understood as the real import of Pope Francis’ discourse, bearing in mind his insistence that it should be read as a ‘social teaching’ rather than a green manifesto. As he succinctly puts it in the first chapter: “The human environment and the natural environment deteriorate together; we cannot adequately combat environmental degradation unless we attend to causes related to human and social degradation” (49).

Again and again he returns to this central theme, variously repeating how “everything is connected” and thus if we fail to hear the cries of the poorest among us, it becomes “difficult to hear the cry of nature itself” (117). Warning against both a misguided anthropocentrism as well as ‘biocentrism’ (i.e. focusing on environmental concerns above all else), he further warns: “There can be no renewal of our relationship with nature without a renewal of humanity itself. There can be no ecology without an adequate anthropology. When the human person is considered as simply one being among others, the product of chance or physical determinism, then our overall sense of responsibility wanes” (118).

The spiritual crisis of modernity

Such a people-centred vision of social progress is explored in a chapter on “integral ecology”, which emphasises the relationship and interdependence between nature and society, and the consequent importance of combating poverty while “at the same time protecting nature” (139). But the entire letter is infused with his appeal for humanity to protect the most vulnerable, who are the “majority of the planet’s population” and yet treated “as an afterthought” in international political and economic discussions, if not “treated merely as collateral damage” (49). Pope Francis repeatedly rails against our collective indifference to widespread human suffering, as revealed by our lack of indignation “at the enormous inequalities in our midst” (90), as well as our lack of response to the tragedies of migrants who often “flee from the growing poverty caused by environmental degradation” (25). In this light, he goes on to describe the present ecological crisis as “one small sign of the ethical, cultural and spiritual crisis of modernity”, and asserts that “we cannot presume to heal our relationship with nature and the environment without healing all fundamental human relationships” (119).

It is from this direct appeal to our compassion and empathy for others that we can fully appreciate the encyclical’s wider political, economic and ecological perspectives. Without a mass awakening of conscience about the needless suffering of those less fortunate than ourselves, there is perhaps little hope that humanity as a whole will be inspired to overcome our “rampant individualism” (162), and instead “replace consumption with sacrifice, greed with generosity, wastefulness with a spirit of sharing” (9). As elucidated in the sections on ‘The principle of the common good’ and ‘Justice between the generations’, for example, a genuine sharing of resources (both between and within nations) can only follow from a sense of global solidarity and common destiny, in which we realise that “the world is a gift which we have freely received and must share with others” (159). Our inability to think seriously about the wellbeing of future generations is linked to our “inability to broaden the scope of our present interests and give consideration to those who remain excluded from development” – hence the need for intra-generational solidarity as well as a fairer sense of intergenerational solidarity (162).

Indeed whether we are believers or not, it is arguable that a fairer and more sustainable distribution of resources throughout society can only result from an urgent understanding of the “period of self-destruction” that we are living in, and the need to adopt new lifestyles and new modes of economic organisation that affirm a sense of “universal fraternity” (228), especially “with those in greatest need” (227). It follows that a vast educational endeavour is required to overcome the “excessive anthropocentrism which today… continues to stand in the way of shared understanding and of any effort to strengthen social bonds” (116). Such is the subject of the final chapter that discusses the social mindset and behaviours that reflect a more enlightened understanding of responsible stewardship in place of the old “techno-economic paradigm”.

One world with a common plan

The encyclical makes clear that this requires much more than personal lifestyle changes, but a new conscious awareness that “we are one single human family” (52) and “one people living in a common home”, which ultimately has to be translated into “solutions that are proposed from a global perspective, and not simply to defend the interests of a few countries. Interdependence obliges us to think of one world with a common plan” (164). The Church therefore calls for a global consensus to confront our deeper problems “which cannot be resolved by unilateral actions on the part of individual countries” (164), and it reaffirms Benedict XVI’s call for a “true world political authority” to manage the global economy in the common interests of all people and nations (175).

No doubt Pope Francis doesn’t hit the right note on every social and environmental issue, and the more uncompromising or agnostic activists may be put off by the later passages on worshipping God, performing the Sacraments and experiencing the Eucharist as “an act of cosmic love” (236). But that would be to dismiss a quite remarkable document that contains within its 246 paragraphs a teaching of critical importance for the great transition that humanity must now experience, with no certain outcome in the short years to come. We may all derive benefit from carefully reading Laudato Si’ ourselves, and interpreting its essential message in the light of our own sympathies and experience. Considering the terseness, eloquence and oft beauty of its expression, that message is best summarised with a final set of choice quotes:

“Concern for the environment thus needs to be joined to a sincere love for our fellow human beings and an unwavering commitment to resolving the problems of society” (91).

“We must regain the conviction that we need one another, that we have a shared responsibility for others and the world, and that being good and decent are worth it” (229).

“For all our limitations, gestures of generosity, solidarity and care cannot but well up within us, since we were made for love” (58).

“Everything is related, and we human beings are united as brothers and sisters on a wonderful pilgrimage, woven together by the love God has for each of his creatures and which also unites us in fond affection with brother sun, sister moon, brother river and mother earth (92).”

Article: Leading Churchmen in Britain call for a more equal and sharing society
The Church of England has spoken out in trenchant terms about the extreme inequality that defines modern Britain, arguing today that moral principles and...
Blog: Heeding Christ’s teaching to share in the 21st century
To address the epochal challenges of the twenty-first century, we will have to heed Christ’s simple message like never before—and finally share the world’...
Article: Christmas, the system and I
You and I constitute the very system that we blame for the world’s problems, which is starkly illustrated at Christmas when we rob our fragile earth on...
Article: The spiritual imperative to share our world
The major spiritual lesson for humanity in the twenty-first century could not be simpler or more urgent, however difficult it has been to realise this...
Printer-friendly version