Only a global Green New Deal can save the planet 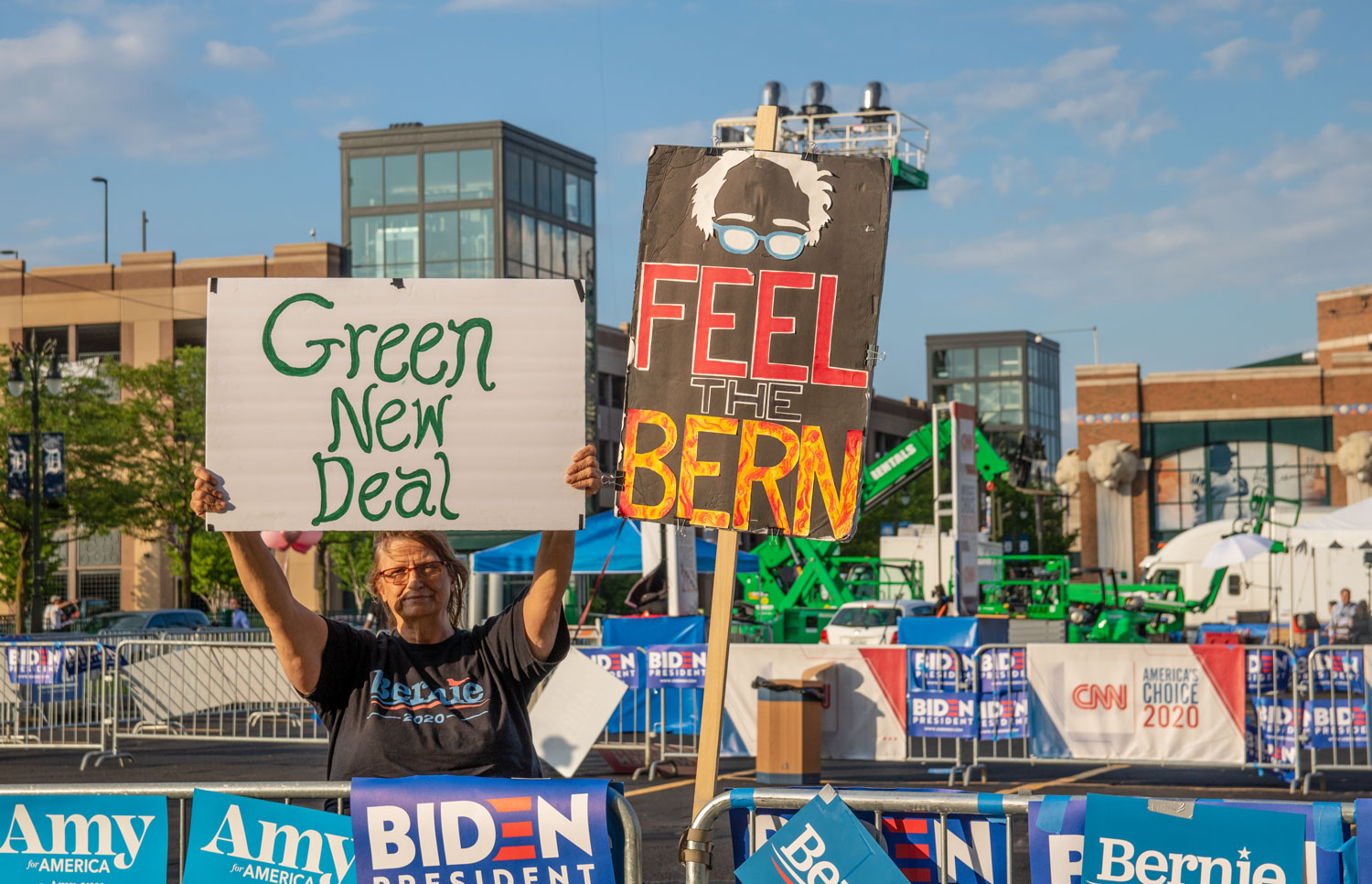 The Sanders plan for a Green New Deal recognizes that unprecedented international cooperation will be needed—with the US doing its fair share—if we’re to have any hope of solving the climate crisis. By Tom Athanasiou for The Nation.

Bernie Sanders’s Green New Deal is nothing short of remarkable. It faces the climate challenge more honestly and comprehensively than any other proposal yet. It calls for government action on a heroic scale—committing the United States to do its fair share to cut global greenhouse gas emissions in half by 2030, in line with the findings of the landmark scientific report by the United Nations Intergovernmental Panel on Climate Change (IPCC) last October—and outlines a set of bold policies to achieve that extremely ambitious goal. The plan’s 10-year, $16.3 trillion price tag raised eyebrows among the usual inside-the-Beltway suspects, but the Democratic presidential candidate isn’t backing down. “The fundamental question is do we respond to the degree that the scientific community tells us we must, or do we not?” Sanders told Mother Jones. “And from a moral perspective, I think we have no choice but to act.”

Unveiled on August 22, when his presidential campaign visited Paradise, California, the once-idyllic town incinerated by last summer’s record wildfires, Sanders’s Green New Deal envisions “a ten-year, nationwide mobilization centered around justice and equity.” It promises to “end unemployment” by creating 20 million “good paying, union jobs with strong benefits.” It would prohibit the import and export of fossil fuels, ban fracking and mountaintop-removal coal mining, and end emissions from the US transportation sector by 2030. It would establish a “just transition” program so that workers in the fossil fuel industry don’t suffer from the shift to a greener economy, and it would create a separate fund to help communities of color meet the climate impacts to come. Give Sanders his due: This is what a serious climate plan looks like in 2019.

But the true genius of Sanders’s Green New Deal—its secret weapon for achieving the massive emissions cuts he promises—has gone unnoticed by mainstream news organizations and even most climate activists. He clearly recognizes that eliminating greenhouse gas emissions by 2030, as some climate activists have demanded, is all but impossible in an economy as enormous and energy intensive as the United States’—at least without paralyzing transportation systems, endangering food supplies, and otherwise triggering a social backlash. But rather than just endorse the 2030 deadline anyway, as some activists insist, or pretend that the science is negotiable, as most politicians do, Sanders has found a credible way around the dilemma.

His Green New Deal includes a pledge to help the world’s poorer countries move rapidly away from fossil fuel use, reducing their greenhouse gas emissions as part of a transition as deep and comprehensive as the one that would simultaneously unfold in the United States. Specifically, he proposes that the US provide $200 billion to the UN’s Green Climate Fund, a program that helps poor countries leave coal, oil, and gas behind in favor of solar and other renewable energy sources. This, he says, would “reduce emissions among less industrialized nations by 36 percent by 2030.” Combine that reduction with the 71 percent drop in US emissions by 2030 that Sanders projects under his Green New Deal, and the net effect, he estimates, would be equivalent to cutting US emissions by 161 percent—far more than the 100 percent that the climate emergency movement is demanding.

This really could work. There is a vast potential for rapid emissions cuts around the world. But these cuts will not be made in time unless the rich nations not only decarbonize their own economies but also provide financial and technological support to developing countries that have the desire but not the means to slash their emissions while, it must be said, continuing their development. Analysts may question whether Sanders’s figures pencil out—more on that below—but it remains true that a dollar invested in green energy often goes further in a developing country than it does in the United States. Given that massive emissions cuts must be made very quickly, this matters.

Some American activists do understand the game-​changing nature of the Sanders plan’s international focus. “By calling for US support for a 36 percent reduction in emissions by poorer countries by 2030, as well as $200 billion for the Green Climate Fund to make this concrete, the Sanders plan recognizes that unprecedented international cooperation will be needed—with the US doing its fair share—if we’re to have any hope of solving the climate crisis,” said Brandon Wu, the policy and campaigns director of ActionAid USA, speaking to The Nation. “As a rich country, we have a huge responsibility to solve the problem we’ve made. But this has been missing from most discussions about the Green New Deal or about US climate action in general.”

Sanders’s plan has the side benefit of offering climate activists a way out of the corner they’ve backed themselves into with their demand of zero US emissions by 2030. In last year’s IPCC special report, Global Warming of 1.5°C, climate scientists declared that limiting the rise in temperature to 1.5 degrees Celsius above the preindustrial average required cutting global emissions by 45 percent from 2010 levels by 2030 on the way to net zero by 2050. Since rich countries pollute much more than average, climate activists argued, they have to shoulder a much greater burden in this effort. In the United States, the Sunrise Movement has called for a 10-year mobilization to reach greenhouse gas neutrality, and in the United Kingdom, Extinction Rebellion has called for zero emissions by 2025. Such demands evoke the scale of action necessary and are simple to communicate. Unfortunately, they are also seen as unrealistic and impossible to meet, even by many climate hawks. This may be why the Sunrise Movement doubts the feasibility of decarbonizing the economy by 2030, but still support calls that push in that direction. When The Nation recently askedVarshini Prakash, the group’s executive director, about reaching zero emissions by 2030, she demurred, saying, “We don’t believe that. People make a lot of assumptions.” The Sanders plan enables climate emergency activists to pivot back on the offensive and demand that other candidates match the ambition of his Green New Deal.

What makes the Sanders plan special is that he accepts the hard scientific truth that steep emissions cuts are essential but he makes such cuts feasible by refusing to limit his vision on how to achieve them. Rather, he adds another hard truth: If humanity is to stabilize the global climate system, rich nations must do their fair share by going beyond domestic action and providing support for emissions reductions in poorer countries. Sanders is the first major American political figure to face the reality and scale of this necessity. His Green New Deal would be a defining act of international solidarity. It would reanimate the Paris Agreement, which is struggling, and cue up a second breakthrough, the flow of financial aid to poor countries that is necessary to ward off climate catastrophe.

Defining a given nation’s fair share of emissions reductions is not a trivial enterprise, and while Sanders’s 161 percent number is not definitive, political and ethical judgments inform it. I know this because the figure is based on an analysis by the Civil Society Equity Coalition, which is supported by the modeling of the Climate Equity Reference Project, which I help to coordinate (though I played no role in designing Sanders’s plan). His 2030 domestic reduction target of 71 percent is based on the work of many experts in many fields, including engineering, economics, and policy. Neither number is beyond criticism, but both are in the right ballpark. And when it’s time to review the details, the climate nerds from the Sanders team will, I’m sure, be happy to show their work. Transparency, after all, is a part of the job here. The future in which we all actually have a future will involve plenty of debate, and there’s no room for hidden assumptions.

Which brings us to the 10-year, $16.3 trillion price tag for his Green New Deal. One way to think about this is that it amounts to $1.63 trillion per year, roughly twice what the US spends annually on defense. But, Sanders points out, much of the Green New Deal’s cost would not be paid by directly taxing ordinary Americans; it would come from “making the fossil fuel industry pay for their pollution, through litigation, fees, and taxes, and eliminating federal fossil fuel subsidies.” Moreover, much of that $16.3 trillion is more properly considered an investment rather than a deadweight cost. He promises “massive investments” in energy storage, sustainable plastics, and other green technologies, along with ambitious programs to shift US agriculture away from today’s industrial model toward regenerative farming, which builds healthy soil that improves resilience to drought and other climate impacts while slowing global warming by sequestering carbon. Finally, he argues, we must weigh the cost of action against the cost of inaction, which would be very great—far, far higher than $16.3 trillion.

Bernie Sanders’s Green New Deal is a potential breakthrough in climate politics. It would reinvigorate the Paris Agreement to limit temperature rise to well below 2 degrees Celsius, a goal that the agreement’s signatories (195 nations have signed on) will revisit at a UN climate summit on September 23. Indeed, the Sanders plan and the Paris Agreement go together very well, for they meld the twin imperatives of domestic and international climate justice. Combine the two and you get a Global Green New Deal, an idea that The Nation advanced 20 years ago and that today is needed more urgently than ever.

Clarification: This article has been updated to reflect the Sunrise Movement’s official position on reducing carbon emissions by 2030.

Tom Athanasiou, the director of EcoEquity, is the author of the forthcoming book, Everybody Knows: Climate Emergency in the New Age of Inequality.

Article: If America can find $716bn for the military, it can fund the Green New Deal
At long last the political debate in the world’s richest country is vibrant with proposals that would help the most vulnerable in our society. And what do...
Article: The meaning of the Green New Deal
The Green New Deal strongly affirms the need for more equity and social justice, and the fact that these principles are being presented and endorsed by...
Blog: The 'green new deal' supported by Ocasio-Cortez and Corbyn is just a new form of colonialism
In the new energy revolution, we risk perpetuating the belief that rich countries are entitled to a greater share of the world’s finite resources...
Report: The intersection of politics and spirituality in addressing the climate crisis
The following interview with STWR’s founder, Mohammed Sofiane Mesbahi, examines both the contemporary political and profounder spiritual implications of...
Printer-friendly version