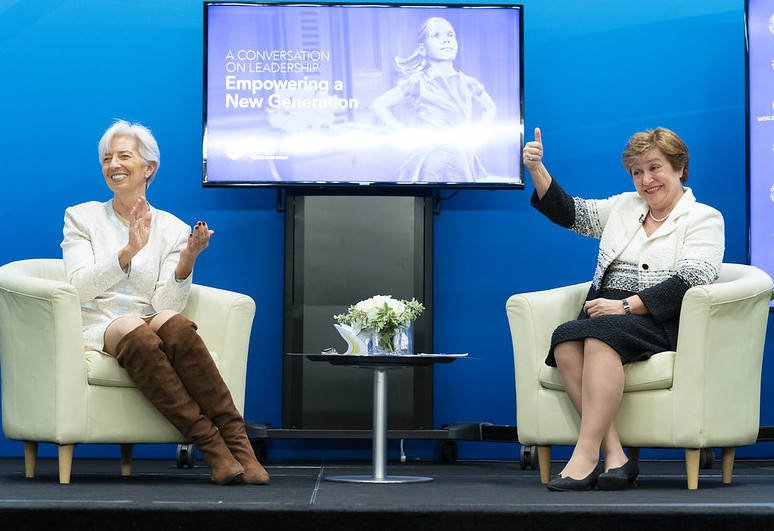 With its latest pronouncements on the threat of rising inequality, can we expect to see an International Monetary Fund that firmly rejects the austerity policies it has historically pushed? Unfortunately not, explains Sam Pizzigati for Inequality.org.

Kristalina Georgieva has run one of these mighty institutions — the International Monetary Fund — since this past fall. Earlier this week, Georgieva said all the right things about the staggering economic inequality that continues to plague us. She delivered a clear and reasoned call for higher taxes on the world’s rich.

“At the top of the income distribution,” Georgieva noted, “our research shows that marginal tax rates can be raised without sacrificing economic growth.”

The new IMF chief coupled this call for a big tax bite on high incomes with a pitch for big spending hikes on health, education, and other programs that can help build better “social cohesion.”

Georgieva’s words made headlines the world over. People listen when the IMF speaks. The 75-year-old institution ranks as one of the world’s most influential economic entities, functioning, the Guardian explains, “as the global lender of last resort, bailing out countries in financial difficulty and issuing policy advice alongside its interventions.”

People listen particularly closely when the IMF seems to be changing that advice. From the early 1980s into the 21st century, the advice the IMF proffered essentially ignored inequality. IMF officials advised developing nations to woo the rich, not tax them, and keep social spending modest.

The advice IMF managing director Georgieva delivered this week would have shocked those IMF officials. They preached that nations only develop economically when they give “free markets” free rein, when they privatize and deregulate, when they offer investors a “labor flexibility” that keeps workers off picket lines and thankful for any job that may come their way.

Follow our rich people-friendly advice, IMF officials regularly assured struggling nations, and you’ll live to see bright, sun-shiny days. Over the course of decades, struggling nations accepted that advice — they had no choice if they wanted an IMF loan package — but that promised bright future never materialized. Instead, the nations that accepted the IMF’s austerity counsel watched living standards droop for the great mass of their populations while new waves of wealth cascaded into the pockets of their most fortunate.

At the IMF, researchers noticed all this, too. About a decade ago, they began producing a series of reports and analyses that detailed the dangers of ignoring growing divides between the wealthy and everyone else. Back in 2011, for instance, two IMF economists marshalled evidence that directly challenged the conventional wisdom on inequality as an unavoidable consequence of economic progress.

“Do societies inevitably face an invidious choice between efficient production and equitable wealth and income distribution?” the economists asked. “Are social justice and social product at war with one another? In a word, no.”

In 2014, an IMF policy paper concluded that the recommendations the IMF drops on struggling nations ought to take inequality into account and work to blunt inequality’s “adverse effects.”

IMF researchers the next year revealed “an inverse relationship” between gains for the rich and economic growth. The higher the income share of the affluent in a society, they showed, the lower the growth rate, a finding based on an analysis of the economic experience of 159 nations between 1980 and 2012.

“We find,” the researchers summed up, “that increasing the income share of the poor and the middle class actually increases growth while a rising income share of the top 20 percent results in lower growth — that is, when the rich get richer, benefits do not trickle down.”

In 2017, a 130-page IMF research guidance “warned that excessive inequality could “polarize politics” and made the case for “significantly higher marginal tax rates on top income earners.” The average top income tax rate on the developed world’s wealthy, IMF fiscal affairs director Vitor Gaspar pointed out, had since 1981 dropped from 62 to 35 percent.

Earlier that same year, IMF research had explored why inequality poses such a threat to economic health. In nations with wide income gaps, an IMF working paper related, levels of trust fall precipitously, with far-reaching consequences. People who trust one another, the paper noted, turn out to be “more likely to collaborate in trade, innovation, and entrepreneurship.”

This week’s pronouncements on inequality from IMF managing director Georgieva rest, in other words, on years of IMF research on the economic and social toxicity of concentrated income and wealth. So can we now expect to see, under her leadership, a new “woke” IMF that firmly rejects the austerity policies the IMF began so zealously pushing four decades ago? Can we expect this new IMF to take the global lead in the charge against economic policies that keep inequality so devilishly entrenched?

Unfortunately, no. We’ve seen this movie before, and it didn’t end happily.

In 2014, Lagarde warned that “rising income inequality” is casting a “dark shadow” across the global economy.

“Seven out of 10 people in the world today live in countries where inequality has increased in the last three decades,” she added. “And yet we know that excessive inequality stops growth, inhibits inclusion, and undermines social capital.”

An accurate and thoughtful appraisal. But at the IMF operational level, despite these noble sentiments, precious little changed during Lagarde’s tenure at the IMF summit. IMF officials continued to push struggling nations to adopt keep-rich-people-smiling policies — and egalitarian watchdogs worldwide took notice.

The IMF “now concedes,” Oxfam analysts noted in 2017, that countries don’t need to accept greater inequality to grow economically. Yet the IMF’s “policy advice fails to match its research and rhetoric.”

Oxfam documented that failure with a close assessment of 15 IMF policy initiatives around the world. Those assessments showed an IMF not “taking its own concerns seriously about the economic threats of inequality.”

“We see the IMF recommend policies that will knowingly increase inequality,” the Oxfam analysis explained. “They then offer measures to compensate the losers of such policies — often the most vulnerable. If the IMF is serious about the macro-economic concerns inequality provokes, then they should begin with policies that attack inequality rather than mitigating harm caused by their advice.”

“It is time for the IMF to cast its influence well beyond words into policies and programs,” Oxfam concluded. “A far more radical overhaul is needed in the way it does business.”

A year later, another egalitarian global watchdog, the Jubilee South Asia Pacific Movement on Debt and Development, found no sign of that overhaul.

International financial institutions like the IMF, the Jubilee group charged in 2018, are still pressing nations to privatize public services, cut social spending, and limit taxes on the financially fortunate. The “more unorthodox” recommendations that IMF research reports have put forth — increasing public investments, enacting taxes on wealth and financial transactions — “do not seem,” the Jubilee activists noted, “to have made a dent” on actual IMF policy.

In effect, the Jubilee South Asia Pacific critique added, international financial institutions like the IMF have become “the emperor insisting he is wearing new clothes.” They give us “pronouncements of change and reform” while they “pursue the same neoliberal path that brought us to where we are now – in an inequality trap that stretches across generations, past and present.”

The European Network on Debt and Development would follow up the Jubilee South Asia Pacific with a study that compared the conditions on IMF loans to 26 countries in 2016 and 2017 to loans the IMF had approved in 2011 to 2013. In 23 of the 26 loans, the study found, IMF loan programs were continuing to “oblige borrowers to implement austerity.”

“The IMF has changed its rhetoric on inequality and social inclusiveness, but its operations continue to impose the same harmful policies of the past,” the International Trade Union Confederation’s Lara Merling summed up last year in Lagarde’s final months as the IMF’s top exec. “If the IMF is truly concerned about growth that benefits ‘the many,’ it needs to stop promoting policies that have time and time again hurt working people.”

Will Lagarde’s successor, Kristalina Georgieva, now deliver the break from the IMF past that Lagarde could not? The early signs don’t seem promising.

This past Tuesday, on the same day Georgieva pledged the IMF to “tackling inequality,” the Washington, D.C.-based Center for Economic and Policy Research updated its analysis of the IMF’s latest loan deal with Ecuador. That austerity agreement, notes CEPR senior research fellow Andrés Arauz, is leaving Ecuador with “lower per capita GDP, higher unemployment, and increased macroeconomic instability,” outcomes “all tragically unnecessary.”

“Ecuador had no need for this ‘belt-tightening,’” adds Arauz. “The IMF program is actively undoing a whole series of reforms and policies that contributed to generating economic growth, lowering unemployment, and reducing inequality and poverty.”

Why has so little changed at the IMF? Australian analysts Christopher Sheil and Frank Stilwell have speculated on the persistent gap between what the IMF has been professing in public and doing in private.

On the one hand, Sheil and Stilwell note, the uplifting IMF rhetoric about fighting inequality could be a somewhat cynical attempt to “to distance the institution” from its decades-long history of exacerbating economic inequalities. The rhetoric “offsets” criticism of that history, without forcing the institution to actually change anything. Other IMF critics have dubbed this approach “organized hypocrisy.”

On the other hand, the IMF’s professed commitment to fighting inequality could be completely genuine. The failure to implement that commitment could simply reflect the “internal struggle and institutional inertia” that invariably frustrate attempts at change in large organizations.

Or the ongoing gap between what the IMF says and does could reflect the reality that the IMF answers ultimately to the nations with the world’s largest economies. And if these powerful nations have leaderships that play nice with rich people — we’re looking at you, the USA, UK, China, Russia, and France — global economic institutions will continue to pay no more than lip service to the economic importance of greater equality.

Researchers at the IMF can’t change those leaderships. That burden rests on us.

Sam Pizzigati co-edits Inequality.org. His recent books include The Case for a Maximum Wage and The Rich Don’t Always Win: The Forgotten Triumph over Plutocracy that Created the American Middle Class, 1900-1970. Follow him at @Too_Much_Online.

Blog: The IMF is hurting countries it claims to help
The fund’s loan agreement with Ecuador will worsen unemployment and poverty, providing more reasons for serious reform at the IMF, writes Mark Weisbrot.
Article: World leaders must stop fuelling inequality
As global leaders gather in the coming months at several summits and meetings, the following open letter is written by the growing global movement to...
Blog: The World Bank needs to understand poverty and what it actually costs a family to live on
The World Bank claims poverty is decreasing around the world but UN research shows it depends on what you measure. If we are serious about reducing...
Article: The IMF and the World Bank: 75 years on
A decade after the financial crisis shook the foundations of the global financial system, the Bretton Woods Institutions face an uncertain future. The...
Printer-friendly version