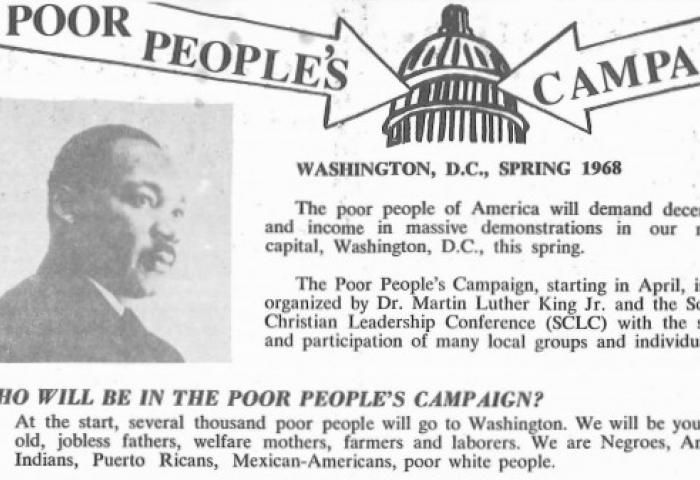 People across the Global South and economically marginalized people in the North are increasingly aware of the need to organize, agitate for and advance a vision of economic equality such as Dr. King proposed 50 years ago. #MLKGlobal advocates internationally for the recognition and take-up of MLK’s original Economic Bill of Rights, revisited for today. A “radical redistribution of economic and political power” is a moral imperative if we are to ever truly fulfil Dr. King’s vision, says the MLK Global campaign.

The Quest for Peace and Justice were the first words uttered by Rev Dr Martin Luther King Jnr as part of his Nobel Prize acceptance speech given on 11th December 1964. Dr King’s lifelong quest has become our unfinished business agenda. The task of seeking justice, exposing poverty and confronting war and conflict is still a quest worth pursuing as part of our common humanity and shared future together. It is not true that things cannot change, they can! If we have a collective conviction of action and hope, then together we can transform the political environment to bring about the change needed to ensure peace and justice is secured for all people.

A shared vision of justice embodies a sustained hope that poverty eradication is possible and is an achievement worth striving for. Hope is not just a time bound concept, it’s also a love bound concept that requires an analysis of the realities, a definition of what is wrong, and clarity of what needs to be changed.  We cannot get away from the injustice, the inequalities, the poverty, the conflicts and wars by ignoring them, or delegating them to corporate or political institutions to play out power games. Dr King’s lifelong vision, work and campaigns pursued justice and equality for all.  His Christian faith compelled him to express and affirm a common humanity, which united all people on earth, irrespective of religion, race or culture that might separate us from each other in one human family. Every human struggle endured encourages us to change attitudes and behaviours, leading us towards transformation of ourselves and of the world.

Our world has never been more prosperous, and, at the same time, more inequitable than it is today. Inequality has reached a level that we can no longer afford to ignore. People who have been submerged into poverty, driven into overwhelming debt, marginalised, and displaced are crying out with a greater sense of urgency and clarity than before. The global community must recognise the need for all of us to join hands together to do justice in the face of unparalleled and catastrophic inequalities in the distribution of wealth.

Therefore, we call out the fatal intertwining of the global financial, socio-economic, climate and ecological crises accompanied in many places of the world by the suffering of people and their struggle for a decent life. We call out market deregulation and unrestrained privatisation of goods and services that exploit whole societies and dismantle social programs and services. We call out uncontrolled financial flows that destabilise the economies of an increasing number of countries all over the world. We will not accept this as a ‘norm’ in 2017, that is why through the Project 2018 campaign we are renewing our call for Dr King’s vision embodied in the ‘Economic Bill of Rights’.

#MLKGlobal proposes the internationalising of the 1968 Poor People’s campaign with the first of 5 global mobilisations over the coming decade 2018-2028 linking USA social justice movements with other social justice movements around the world. This is the time for a global call out of governments, institutions, big corporations and business. The year 2018 – the 50-year anniversary of the life and work left by Dr King – presents us with an opportunity to join hands, voices and actions together in our shared quest for peace and justice.

“We are caught in an inescapable network of mutuality, tied in a single garment of destiny. Whatever affects one directly, affects all indirectly...”

“We must recognize that we can’t solve our problem now until there is a radical redistribution of economic and political power… this means a revolution of values and other things. We must see now that the evils of racism, economic exploitation and militarism are all tied together… you can’t really get rid of one without getting rid of the others…’’

Background and vision of the campaign [PDF]

Report: Heralding Article 25: A people's strategy for world transformation
After so many years of political inaction only the massed goodwill of ordinary people can bring about an end to poverty in a world of plenty through...
News: Read STWR's flagship book: ‘Heralding Article 25’
Share The World’s Resources (STWR) have released a book version of the pioneering publication by Mohammed Sofiane Mesbahi, titled 'Heralding Article 25: A...
Article: A global call for sharing and justice
Protesters in the Arab world have much in common with those reacting to austerity across Europe, as well as the millions who have mobilised in support of...
Report: End austerity – and kickstart Martin Luther King’s revolution of values
Fifty years ago, at New York’s Riverside Church, Martin Luther King made a passionate plea for a more equal, more just, more peaceful and more dignified...
Printer-friendly version