Looking good and making a fast buck? Why rich countries help the poor 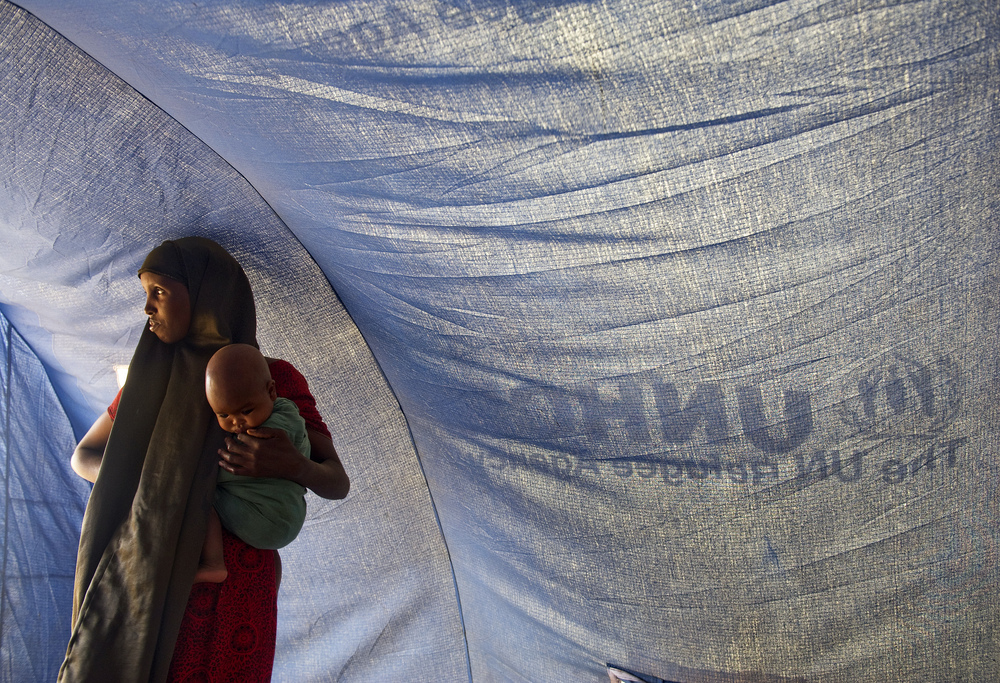 The arguments for rich nation's moral duty and responsibility to help the distant needy are well known, but short-term political and commercial advantages are dominating the practice of redistributing foreign aid. And the underlying problem is a lack of critical public engagement and concern, writes David Hulme in an extract from his new book, 'Should Rich Nations Help the Poor?'.

Why do rich nations help the poor in faraway places? There are a mix of very different reasons, ranging from the high-minded – “It’s our moral duty” – to the venal – “We can look good and make a fast buck out of this”. Commonly, the governments of rich countries use combinations of altruism and self-interest to justify support for the distant needy to their taxpayers. There are four distinct lines of argument.

The most commonly heard reason that the leaders and politicians of rich nations make for supporting the distant needy is moral duty. All human beings should be compassionate and should seek to reduce the suffering of others. The pursuit of social justice requires that the poor in any part of the world should be assisted by those individuals (and their governments) with the means to help. From this perspective such actions are not simply charity, they are a duty. How could anyone spend $5 on a cup of coffee when $5 could pay for the medicine to save a child’s life in Africa?

The second argument, moral responsibility, is based on causal analysis. It holds that rich nations and their citizens must support poor nations because they are responsible for the economic and political structures that have made countries and populations poor. In effect, this is a critique of colonialism, post-colonial developmentalism, contemporary capitalism and globalisation. It views such processes as a major cause of global poverty, global inequality and social injustice. The impacts of colonialism (resource extraction, racism, ethnic divisions, slavery and societal breakdown, illogical national boundaries, government by narrow predatory elites that hold power, etc) have created historical legacies that continue to impoverish poor nations. The classic example is the Atlantic slave trade, which depopulated and socially destabilised west Africa in ways that hamper development today. While all colonial powers have left negative legacies, the Belgians are sometimes held up as bequeathing some of the greatest problems, such as fostering an ethnic divide in Rwanda between the revenue-collecting rulers (Tutsi) and the taxpaying ruled (Hutu) that laid the basis for the genocide of 1994.

And so to the present: a manifestly unfair world trade regime helps keep poor people poor. African cotton farmers are impoverished while US cotton farmers receive vast public subsidies to keep them going. The average cow in the EU receives grants of $2.50 a day: more income than around one-third of humanity. Multinational corporations based in rich countries dominate business in many poorer countries and illicitly help extract $10 from poor countries for every $1 of foreign aid the rich world provides. The world’s leading pharmaceutical companies, based in Europe and the US, charge such high prices for their products that millions of poor people die unnecessarily. Rich country control over finance and technology ensures that poorer countries cannot compete economically or meet the social needs of their populations. Furthermore, the policies pursued by the IMF and World Bank are tightly monitored by the US government (and thus indirectly by US corporate interests). Such evidence has created heated debates among leading philosophers about whether poor countries have an ethical case to declare a “just war” against rich nations in order to protect the lives of their citizens!

In recent years a further strand of argument, climate change, has greatly strengthened the case that the rich nations are responsible for poverty in low-income nations. The world’s most economically advanced countries and wealthiest people have pumped so much CO2 into the atmosphere that this is now undermining the livelihoods of poor people in poor countries.

The third argument for rich nations helping the poor – common interests – is based as much on self-interest as altruism. It posits that people whose basic needs are met should assist the poor if they want to maintain and improve their own wellbeing. The relatively better-off should assist poor people: to improve local and national social cohesion; to reduce the incentives for excluded social groups to threaten social and economic stability; to create economic opportunities; to reduce the likelihood of public health problems and pandemics; and to reduce rates of migration and population growth.

The arguments about health and migration have been highly evident in recent years. Without effective health policy support from rich nations, the likelihood of major new diseases, such as Ebola, evolving in poor countries and subsequently spreading across the world is much higher. Similarly, any serious attempt to reduce the flow of Africans crossing the Mediterranean to live in Europe entails rich nations actively promoting economic growth and job creation in Africa so that the stark inequality in economic opportunities between the two continents is dramatically reduced. Relatedly, if you want to cap global population at 9 billion, rather than 10 or 11 billion, then you need to reduce poverty rapidly in the poorest parts of the world.

The best way to bring down fertility rates is not to hand out contraceptives but to reduce poverty. Prosperity in Bangladesh has brought the total fertility rate (the average number of births in a lifetime per woman) down from 5.2 to 2.1 in just 30 years. An important argument in the west has been that if the distant needy have no prospects for improvement, then some of them might be more likely to support violent political groups and/or engage in drug trafficking and international crime. At the extreme they may become terrorists. So, helping the distant needy may not only be “the right thing to do”, it might also reduce the social and political problems rich nations face. This argument has been common in the US since 9/11, although the evidence to support it is very limited.

The more pertinent argument is that in countries where poverty is the norm, governance is often poor and terrorists can establish bases and training camps there (Afghanistan, Nigeria, Syria and Yemen). There is also a strong liberal economic strand to the common interests argument. The more poor nations and poor people around the world increase their incomes, the greater will be the economic opportunities for wealthier nations and people.

However, behind these three publicly propounded reasons for helping poor countries a fourth and much less noble set of motives has often been uppermost in the thinking of rich nations: short-term political and commercial advantages. Geopolitical considerations were a priority throughout the cold war, with the US and its allies, and the USSR and its allies, seeking to outmanoeuvre each other through buying the support of poorer countries and their leaders with development and military aid packages. This did not simply mean giving foreign aid to a country. It meant giving foreign aid to murderous dictators, such as President Mobutu of the Democratic Republic of the Congo (formerly Zaire).

Alongside foreign policy considerations are commercial interests. Rich countries have commonly “tied” their aid to contracts for their home companies and NGOs; allocated aid as export credits for domestic businesses; and used aid as a form of inducement for commercial contracts to be placed with the aid-giving nation. Margaret Thatcher’s public humiliation over the Pergau Dam – when her government was successfully taken to court for providing the Malaysian government with increased aid in return for their ordering British armaments – is a classic example of aid pursuing commercial interests.

One might expect that the arguments presented above would impact on public opinion in rich nations and, as most of these nations are democratic, on the very different levels of commitment to development described earlier. The evidence, from public opinion surveys in Europe and North America, is, however, paradoxical. While it indicates that the citizens of rich nations do not think about the distant poor very much, it also reveals that they think their governments should do something. For example, when 4,789 people in the UK were asked “What is the most important issue facing Britain today?”, only 0.21% mentioned global poverty. By contrast, in a different survey, when asked about global poverty, 25% declared themselves to be “very concerned”.

But maybe this is paying too much attention to public opinion. If, as Colin Crouch argues, many rich nations have moved into “post-democratic” politics and the mass of the population have withdrawn from active political engagement, then we need to look at business and government elites to understand public policy. From this critical perspective the global poor have proved a useful adjunct to elite interests. Under the guise of “reducing global poverty”, business elites (and the political elites they resource) have been able to promote the economic liberalisation of middle- and low-income countries so that the wealth of these elites has increased at an unprecedented rate. Alongside them official and civil society actors promoting global poverty reduction – bilateral aid agencies, the multilaterals (the UN and the World Bank), big-brand NGOs and even celebrities – have seen their budgets and/or profiles rise. By contrast, informed public understanding of and engagement with what governments are doing to support the distant needy appear to have receded – our leaders are permitted to do the right thing for the wrong reasons.

David Hulme is professor of development studies at the Global Development Institute, University of Manchester. Should Rich Nations Help the Poor? is published by Polity Books (£9.99)

Article: Connecting the dots: Human rights, inequality and poverty
We can rapidly realise the human rights of the world’s poor through global institutional reforms that reduce inequality and share the planet's natural...
Page: Global poverty and inequality
World leaders may suggest that a great deal is being done already to prevent extreme deprivation, but this is far from the reality. Unless governments...
Article: Politically-filtered views on progress against poverty
The policy interpretations given by some critics of the World Bank's global poverty data are yet another form of their own political filtering. Some...
Printer-friendly version