The long march against monsanto: A letter from the Hague 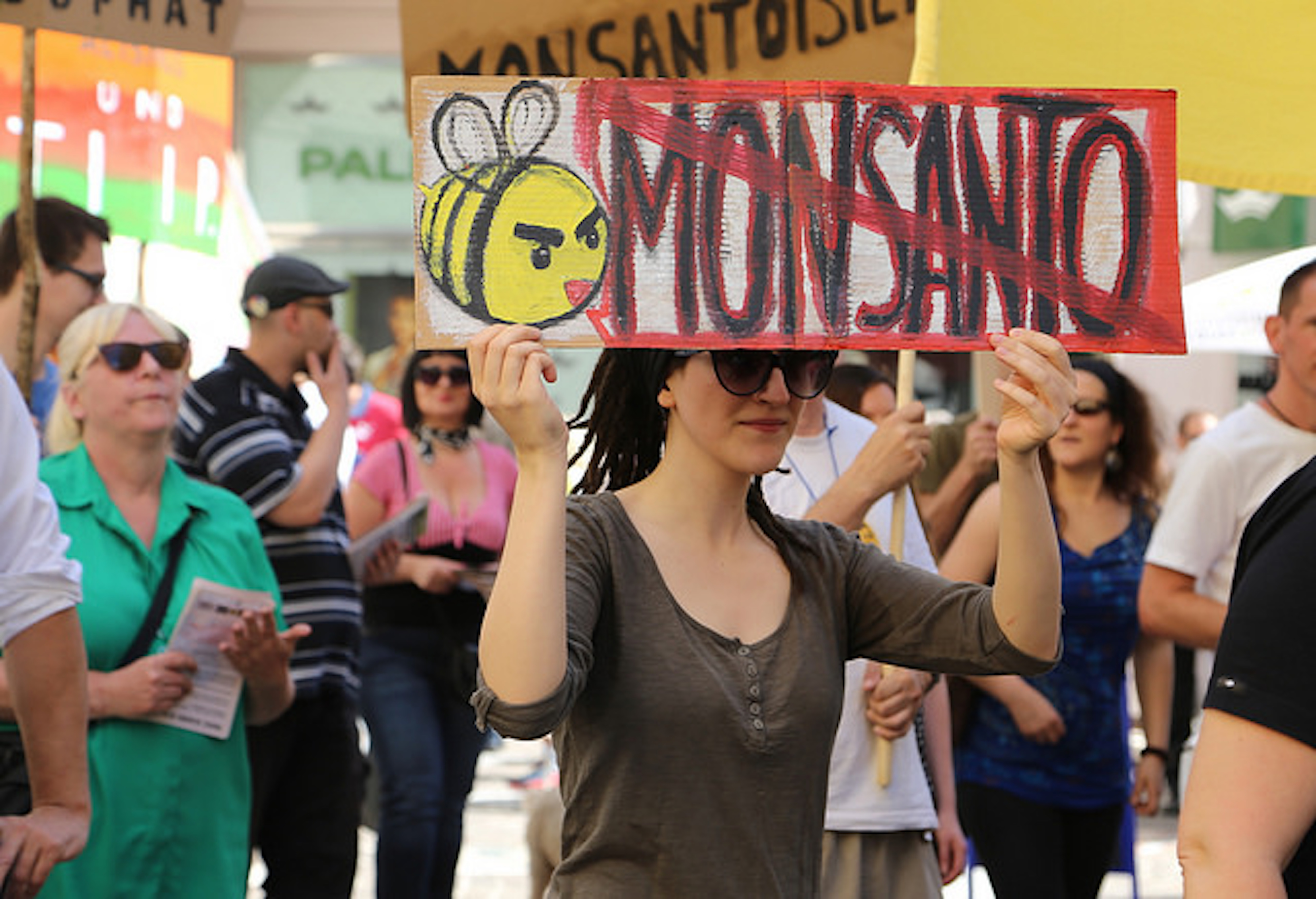 Following the Monsanto People’s Assembly in The Hague, activists converged around the need to 'globalise the struggle' for a new model of food and farming led by the grassroots, writes Ronnie Cummins.

On October 14-16, over a thousand activists, journalists and witnesses from around the world gathered in The Hague, Netherlands, headquarters of the International Court of Justice, to put Monsanto on trial for crimes against humanity and nature (“ecocide”). Before a distinguished international panel of judges, 30 witnesses—including farmers, consumers, scientists, indigenous people and former governmental officials—from Asia, Africa, Australia, Europe, North and South America, delivered detailed and shocking testimony on how Monsanto and its agribusiness accomplices have poisoned the environment and devastated public health.

Victims and witnesses described how, over the past 50 years, Monsanto has duped, assaulted, injured and killed farmers, farmworkers, rural villagers and urban consumers with its reckless use of toxic chemicals and pesticides (PCBs, DDT, Agent Orange, Dioxin, Roundup, 2,4D), and Genetically Modified Organisms (GMOs). The insidious political clout and growing control over the world’s seeds and food by Monsanto and a new global agribusiness cartel constitute a serious, indeed catastrophic, threat to our health as well as to the health of our soils, watersheds, oceans, wetlands, forests and climate.

Monsanto’s chemical- and fossil fuel-intensive GMO crops (corn, soy, cotton, canola, sugar beets, eggplant, potatoes, alfalfa, and others) and the toxic pesticides used to grow them are now polluting 400 million acres in 28 nations, comprising almost 10 percent of the world’s croplands. As a result, GMO ingredients and pesticide residues now contaminate much, if not most, of the world’s (non-organic) processed foods, animal feed, meat, dairy and poultry. Meanwhile GMO soya and chemical-intensive palm oil plantations, commodities utilized for junk food, animal feed, cosmetics and biofuels, are the primary driving forces of the tropical deforestation that threatens to smother the literal lungs of the planet, as well as most of the planet’s biodiversity.

From Sri Lanka, India, Argentina, Bangladesh, China, the Philippines, Argentina, Paraguay, Brazil, Mexico, Honduras, El Salvador, Nigeria, Uganda, South Africa, and dozens of other nations, including the industrialized nations of the North, the same tragic, brutal, criminal, narrative emerged: Monsanto, aided and abetted by its shareholders and business allies, has deliberately poisoned people, communities and the environment in order to maximize profits. Meanwhile, indentured scientists, politicians and mass media—Monsanto’s minions—have done little or nothing to stop this mass homicide and ecocide.

For 20 years, Monsanto, with its army of lawyers and PR flacks, has spread lies in the mass media and scientific journals; intimidated or sued farmers and scientific critics; and infiltrated or bribed politicians, regulatory officials and academics. As the Corporate Europe Observatory put it:

Corporations like Monsanto have limitless resources to buy political power through lobbying. Not only are they represented by numerous lobbying associations at every level from local to global, they also have an army of hired gun lobbyists, fund scientists to act as their mouthpiece, and participate in ‘greenwashing’ projects.’

In addition, Monsanto has routinely carried out acts of biopiracy—robbing indigenous communities and traditional farmers of their knowledge, plants, and seeds and then patenting these life forms as their corporate “intellectual property.” Overturning or simply ignoring national laws, common law, farmer and consumer rights, and international trade and environmental norms, Monsanto and the other, now merging, chemical-biotech giants (Dow, Dupont, Syngenta, ChinaChem, Bayer, BASF) have essentially organized themselves into a powerful and monopolistic global cartel.

This Monsanto-led cartel, drawing comparisons to the Nazi I.G. Farben cartel of the 1930s and 40s, has managed to gain a certain degree of public, media and scientific acceptance by repeating its “big lies” over and over again in the mass media, including: (1) toxic industrial and agricultural chemicals are safe; (2) seeds and life forms can legitimately be patented and monopolized; (3) GMO crops use less pesticides and chemicals; (4)  GMO crops are the only way to feed the world; (5) genetically engineered crops and trees and the chemicals sprayed or laced into them are climate friendly; and (6) Foods derived from GMOs are “substantially equivalent” to non-GMOs.

By destroying the health and livelihoods of literally millions of people, Monsanto has earned the dubious distinction of being the most hated corporation on Earth. No wonder the Biotech Bully of St. Louis is currently trying to change its name and bury the historical record of 115 years of crime and mayhem by merging with the giant chemical, biotech, and pharmaceutical giant, Bayer.

Monsanto refused to appear and testify at the Tribunal, despite being served with a citizens’ subpoena in St. Louis. But on December 10, the Tribunal judges plan to issue legal advisory opinions based upon international law, including the category of human rights violations that fall under the category of “ecocide.”

For more coverage of the Monsanto Tribunal, click here.

While the Monsanto Tribunal was busy putting the multinational corporation on trial under international law, a few miles away across the city, 500 global activists participated in the People’s Assembly, where they discussed how to further expose Monsanto and its industrial agriculture collaborators in the court of public opinion.

The Assembly held three days of interactive workshops on how to strengthen national and international public education, and how to use boycotts and marketplace pressure campaigns to undermine and destroy Monsanto’s profitability and eventually drive it (and companies like it) off the market. The People’s Assembly was organized and funded by a broad coalition of organizations including Regeneration International, Navdanya (a grassroots based organization in India founded by Vandana Shiva), IFOAM Organics, Organic Consumers Association, Biovision, Via Campesina, Corporate European Observatory, and others.

Ultimately the People’s Assembly agreed that we need to not only get rid of Monsanto, but the entire degenerative system of food, farming and land use that is driving global warming, catastrophic droughts and floods, soil erosion, desertification, water shortages, mass biodiversity loss, rural poverty and war, and deteriorating public health.

Leading farmer and campaign activists around the world led the workshops on GMOs, pesticides, seeds, corporate accountability, agroecology and regenerative agriculture. Sessions included: How to Ban GMOs Worldwide; Strategies and Campaigns to Ban Pesticides and Toxic Chemicals; Steps Toward Seed Freedom and Struggles Against Unjust Seed Laws; How to Hold Transnational Corporations Responsible for their Acts; and How We Can Mitigate and Reverse Global Warming and Feed the World.

Hare some of the major strategy ideas that came out of the workshops and plenaries:

(1) Globalize the Struggle. There’s no way to bring the Monsanto and industrial agriculture cartel to heel without organizing and successfully carrying out powerful, global, strategically designed campaigns, both in the marketplace and in the realm of public policy.

Local and even national campaigns no longer suffice. For example, the mass destruction of the Amazon rainforest, the environment and public health currently taking place in South American countries such as Brazil, Paraguay, Colombia and Argentina, brought on by the out-of-control production of GMO soya and corn and the reckless use of pesticides such as Monsanto’s Roundup (glyphosate), Syngenta’s atrazine and paraquat, and Bayer’s glufosinate, can be stopped only by a global North-South campaign that strengthens resistance at home, but also shuts off market demand for these GMO animal feeds in the nations where they are exported.

South Americans cannot possibly stop the deadly production of these pesticide-intensive GMOs in their own countries without the support of activists and consumers in the countries (especially China and Europe) that are importing billions of dollars of these animal feeds for their domestic factory farm production of meat, dairy and poultry. If proper laboratory testing of these GMO animal feeds can be carried out, in combination with testing for the poisons that end up in the EU and China’s meat, dairy and poultry products that are derived from them, then a mass consumer boycott can possibly be organized. Reinforcing this marketplace pressure, groups can simultaneously press for laws requiring the labeling of meat and animal products derived from GMO- and pesticide-tainted feeds. Alongside these market-based campaigns we’ll need to continue our global effort to stop cartel-friendly Free Trade agreements such as the TPP (Trans-Pacific Partnership) and the TTIP (Transatlantic Trade and Investment Partnership), and to enact a global ban on GMO companion pesticides, such as Roundup/glyphosate.

(2) Globalize Hope. A recurrent theme at the People’s Assembly was the need to move beyond gloom and doom and to emphasize that regenerative food, farming and land use (utilizing agro-ecology, organic, agro-forestry and holistic grazing techniques) not only can mitigate global warming, deteriorating public health, rural poverty, environmental destruction and endless war, but actually reverse these trends. One of the lesser known positive developments in the world today is that 25-50 million farmers and ranchers (5-10 percent of all producers) are already practicing regenerative agriculture practices, sucking down and sequestering massive amounts of excess carbon from the atmosphere and safely storing it in the soil, grasslands, forest and wetlands through improved soil management, crop biodiversity, reforestation and conservation. Strengthening this regenerative agriculture movement are hundreds of millions of conscious consumers who are starting to reject GMO and factory farmed foods and are choosing organic, grass-fed, local and regenerative foods instead.

(3) Connect the Dots. Tear Down the Walls and Issue Silos that Divide the Global Grassroots. Coming out of the Monsanto People’s Assembly and Tribunal is a growing commitment among activists all over the world to move beyond language and cultural barriers, beyond national and continental borders, beyond single-issue campaigning, and to begin building a new 21st Century Internationale based on mutual solidarity and concrete cooperation in globally coordinated campaigns. Given the catastrophic consequences of “business as usual,” and continued domination by the global “1 percent,” we can no longer afford to operate as separate movements—the anti-GMO movement, the organic movement, the Fair Trade movement, the economic justice movement, the climate movement, the forest movement, the ocean movement, and the anti-war movement. Nor can we operate as regional or national movements of farmers, workers, students and consumers.

We must connect the dots between interrelated issues and we must work together, from the local to the international level, with fellow leaders of the global grassroots who see the “big picture.” Harnessing the enormous power of the global grassroots, we can build a new diverse Regenerative Movement strong enough and inspirational enough to overturn the dictatorship of Monsanto and the global elite. Coming out of Monsanto Tribunal and People’s Assembly at The Hague there is a new sense of urgency and determination. A critical mass of us are ready to embark on this Long March of resistance, movement-building and regeneration.

Article: Monsanto Tribunal and People’s Assembly
Civil society groups have organised a people’s assembly to hold Monsanto accountable for their crimes against humanity and the environment, and to spell...
Article: Seeds of corporate power vs farmers' rights
The expansion of corporate control in agriculture is reflected in three international treaties that establish the global rights of various stakeholders to...
Article: The world seed conference: good for farmers?
Rather than a push for techno-fixes and tightened intellectual property rights that characterised the recent World Seed Conference, we need a new paradigm...
Printer-friendly version