Imagine... a world that shares 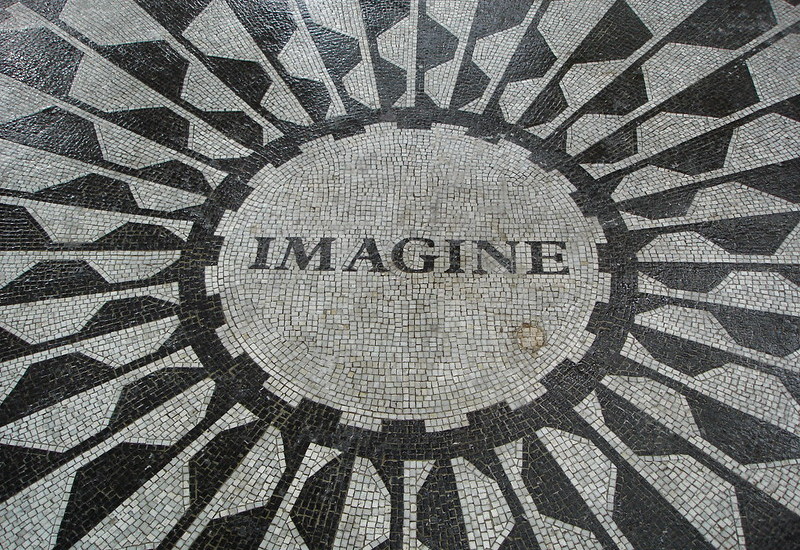 Do we really understand what ‘sharing’ means in its totality? For humanity has done everything but actually put into practice a just and equitable redistribution of the food and resources of the world, so that no-one need go without. By Marc Gregory.

Sharing. An elementary vocabulary word which most people understand before they’re five years old. Indeed, the impulse to share often seems instinctive to young children, so open and free of conditioning are they in their outlook on life. Even as we get older, the basic meaning of the word is never lost. And while that basic meaning underlies everything the word connotes, it can be extrapolated to take on ever broader dimensions, some barely ever considered.

It can—and hopefully will—soon begin to refer to a state of consciousness critically necessary for the entire world at this time.

I wonder if you can

No need for greed or hunger

A brotherhood of man.” *

Presently, we live in a world governed by a proprietary ethos. To one degree or another, it dominates individuals, groups, entire populations and nations. And because this is so, it creates an enormous amount of tension and stress. Thus, we struggle, rage and battle endlessly for control of the things that the Earth provides in abundance—food, water, natural resources, land, oceans and space itself.

The consequences of those conflicts are widely known--war, terrorism, poverty, deprivation, starvation, pollution, often a combination of several of these deplorable elements. The result is a world perilously imbalanced, environmentally degraded and monumentally unjust for over half of its population.

“There’s got to be a better way,” as the old saying goes. Well, it isn’t as if that better way hasn’t been pointed out from time immemorial. It underlies most of the major spiritual traditions and cosmologies found in all parts of the world. It has been eloquently re-stated in our time, notably in the form of Article 25 of the U.N Declaration on Human Rights of 1948, and in the pages of the Brandt Commission report, North/South: A Programme for Survival of 1980. Indications of that better way have also been articulated by some of the most forward-looking, cutting-edge thinkers of our time, those who have a clear vision into the future and the intelligence, courage and integrity to make that vision known for the good of all.

But nonetheless, from our so-called political “leaders” down to the average person in the street, many seem to remain mired in inaction, vainly hoping that somehow, some way, someone will make it better.

That “someone” will have to be us.

Scientific developments in physics and genetics over the past century have borne out what the most enlightened spirituality has always held. We now know that every atom in Cosmos is connected to every other, that there is no separation in Creation. We also know, because of advances in the study of genetics, that human interconnectedness is fundamental and runs far deeper than had previously been imagined.

If these things are so—and I believe they are--then it follows that humanity is One; that regardless of whatever degree(s) of separation we have come to accept as “real,” they are in fact illusory.

On this basis, it is reasonable to conclude that everything necessary for life belongs to everyone equally. While an understanding of personal property is unlikely to disappear, it can of necessity no longer be the foundational core of our consciousness. Once it is understood, as Article 25 delineates, that all are equally entitled to the necessities of life, then the idea of “mine” must inevitably be relegated to one of secondary importance, and, instead, an unwavering commitment to the common good will have to predominate.

The manner in which life is presently lived on this planet should be appalling to anyone reflective enough to view it objectively. More than half of the world’s population must endure on five dollars a day or less, while the wealthiest among us hoard fortunes once considered unimaginable. In submission to a failed worldwide economic system that allows and even thrives on these gross imbalances, we have raped and plundered our common planetary home to the extent that some of the damage already done will be irreparable. And we yearly commit an enormous amount of time, energy and resources to discover new and ever more effective mechanisms to kill—to obliterate--each other.

Were we to be viewed from a distance, any rational being would conclude that, as a race, we are hell-bent on planetary suicide.

And yet, the most enlightened minds throughout history, the Great Sages down through the centuries, have indicated that within each human resides a God—a loving, compassionate, all-inclusive God-in-the-making. They have repeatedly pointed the way out of the morass in which we now find ourselves, and that way is sharing. Sharing equitably the resources, the bounty of the Earth. Sharing our talents and our abilities for the benefit of all. Sharing our common human experience in peace, harmlessness and in loving, heartfelt recognition of the underlying reality that unites us.

This kind of sharing, this recognition of our interconnectedness, refers us back to the basic question. The consciousness of sharing negates the consciousness of possessiveness. It replaces the notion of “mine” and “yours” with the notion of “ours.” Thus understood, sharing is the one method, the one solution to our problems that has never really been adequately tried. We talk about it, we utter noble phrases and pronouncements about its necessity, and we devise inadequate methods of implementing it as if a wan, half-hearted imitation will suffice. We do just about everything but actually put into practice a just and equitable re-distribution of the food and resources of the world so that no-one need go without. Yet sharing comprehensively understood in this manner is the means, the solution par excellence for our survival if we are ever to arrive at that brotherhood of man of which Lennon sang.

Some may say it is unrealistic, that it will never happen, that humanity is too selfish, too complacent, too corrupted to ever really make manifest a kind of planetary culture where all may peacefully abide; where respect and love characterize all of our interactions; where our Earth is revered, nurtured and cared for as the sacred home it is. To those, I would say that it is completely unrealistic to expect anything short of a complete shift to this kind of consciousness to see us into a habitable future. That we really have no other choice.

You may say I’m a dreamer, but I’m not the only one.

Report: Heralding Article 25: A people's strategy for world transformation
After so many years of political inaction only the massed goodwill of ordinary people can bring about an end to poverty in a world of plenty through...
Article: Studies on the principle of sharing
In this ongoing series of studies by STWR’s founder, Mohammed Sofian Mesbahi, he investigates the meaning and significance of the principle of sharing...
Page: Join our campaigns for Article 25
Find out more information about our current campaigning initiatives and events. You can sign up to join us on demonstrations for Article 25; download...
Article: The spiritual imperative to share our world
The major spiritual lesson for humanity in the twenty-first century could not be simpler or more urgent, however difficult it has been to realise this...
Printer-friendly version