History gives us reason for hope that inequality can be beaten 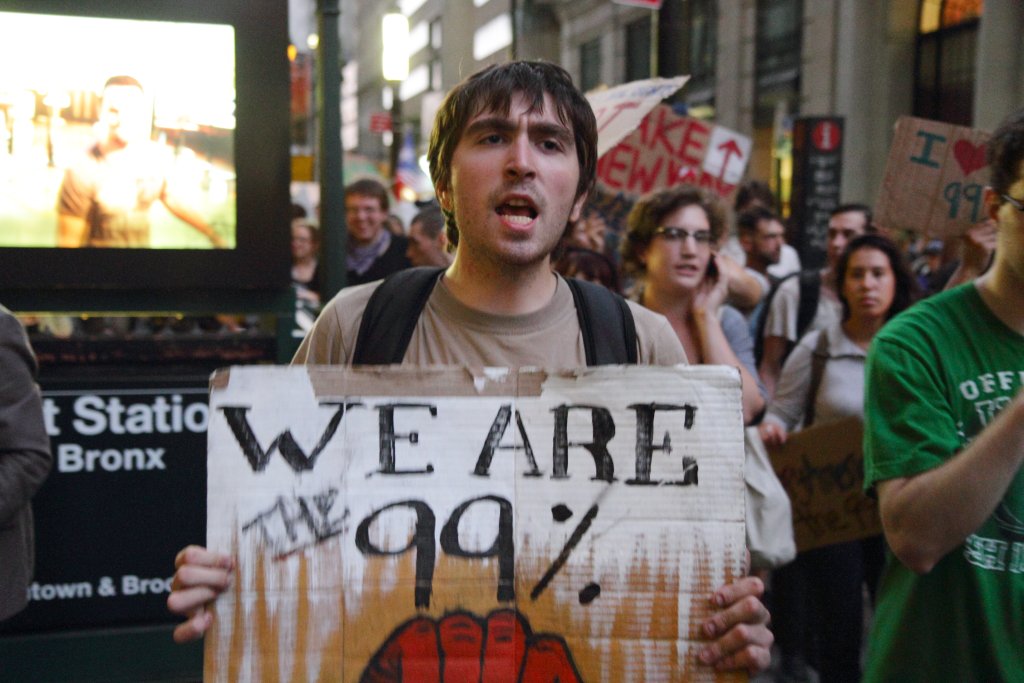 Inequality is a system of dominance that we can only overcome if we have enough strength. No one cedes power becasue of a great powerpoint, writes Ben Phillips for OpenDemocracy.

2020 isn’t just the year of the Covid-19 pandemic. It’s also the year when protest has gone viral. Covid-19 has both supercharged our inequalities and shone a sharper light on them, exposing the reality that the status quo cannot hold. It has opened up a moment of opportunity, and young people are showing how we can seize that moment by building up a movement.

It doesn’t seem that long ago that young people were being lectured to ‘stop being so disengaged’ and ‘start getting involved.’ Now they get told ‘no, not like that.’ Discussions in newspapers and news studios, whether about Black Lives Matter, essential workers striking over poor safety and low pay, or young climate justice campaigners, involve ‘friendly advice’ to activists to ‘tone it down’ and ‘be less demanding’ - to be less in the way. Such complaints often include references to history: ‘why can’t they be more like the protestors of yesteryear - you know, the uncontroversial ones?’

For my new book, How to Fight Inequality I investigated the history of social justice organizing and found conclusive evidence that - contrary to the false distinctions made between ‘then’ and ‘now’ - today’s protestors stand absolutely in the tradition of those who have gone before them. The reactions they are facing are also uncannily similar, but history also shows that we have real reasons for hope based on action.

In 1966, for example, a Gallup Opinion poll showed that Martin Luther King was viewed unfavourably by 63 per cent of Americans, but by 2011 that figure had fallen to only four per cent. Often, people read the current consensus view back into history and assume that King was always a mainstream figure, learning the false lesson that change comes from people and movements who don’t offend anyone.

The true lesson of changemakers is that fighting inequality requires us to be disruptive. As King himself said, “frankly I have yet to engage in a direct action movement that was ‘well-timed’ in the view of those who have not suffered unduly; this ‘wait!’ has almost always meant ‘never.’” Icons who today are sanitized as unchallenging terrified the powerful at the time because they refused to be deferential.

The same lesson is true today: we must be ready to be ‘difficult’ to overcome the deference that can keep us quiet. As Zambian musician and activist Pilato shared with me in a recent conversation:

“Those who go against the social norms are treated as outlaws. Yes everyone is scared, and I am too, but what gives me courage is that I have something that I am more scared of. When our quiet enables one group of people to become so powerful to do whatever they want to us, then that quiet has become enabling, and I know I must be loud, to remind people of the power we have when we use it.”

As well as the courage to be difficult, history also shows that we need the strength that comes from collective organising. Marshall Ganz, for example, worked as an organiser with the Student Nonviolent Coordinating Committee during the Civil Rights struggle and then with Cesar Chavez in the National Farm Workers Association. As he shared with me:

“Pop-ups weren’t enough – they had to be structured into organised power. We had to be patient. The Montgomery Bus Boycott took more than a year of people walking to work. The Farm Workers movement took five years before our first victory. And when we won changes, our victory was not only that we had achieved the win but that we had created greater collective capability. People said, ‘We are stronger than we were”’

Building power together like this is hard work. It’s about methodology, not just philosophy. Jay Naidoo, who founded the trade union coalition in South Africa which helped bring down apartheid, once told me this:

“It was not about how brilliant our argument was – no one cedes power because of a great powerpoint. What matters is the balance of power between your side, the people’s side, in the confrontation and negotiations with the other side, the side of the elite.”

Inequality is a system of dominance that we can only overcome if we have enough strength. As even research by the IMF notes, the weaker trade unions become, the worse inequality will get. The record is clear: we have to get organised.

As well as shifting power, history shows that winning the fight against inequality involves shifting norms, which means not just sharing lists of policies but also creating new stories, because the everyday phrases and images we develop are just as important as the think pieces we publish. As the great American workers’ organizer Joe Hill once noted, “a pamphlet, no matter how good, is never read more than once, but a song is learned by heart and repeated over and over.”

Ironically, we can learn this from perhaps the greatest victory forinequality - neoliberalism. As modern myth-makers, the neoliberals were hugely successful. They developed a high-level intellectual agenda, but that alone didn’t bring them a breakthrough. So they developed a way to sell a cold economic approach as something rooted in a much warmer yearning for freedom and respectability, connecting individualism with nationalism and tradition in the process.

They did so through stories that were told and retold in the mass media from magazines to movies. It’s no coincidence that the most famous voice of neoliberalism was not one of its intellectuals like Milton Friedman, but an actor-cum-politician, Ronald Reagan.

There’s a tendency among some progressives to see themselves as valuing reason over emotion, and facts over myths. This is understandable, but it’s not a winning proposition. Technocracy will not deliver us from inequality.

Even if we have all the science on our side, we will lose if we cede all the great stories, passion and moral conversation to the other side. So we need to get comfortable at creating conversations which make people cry and laugh and not just think; which make people angry, hopeful, excited and determined. For example, the success of social movements in the reform of Mexico’s labour law to provide domestic workers with guaranteed access to social security and paid holiday was facilitated by the popularity of the movie Roma, which has no explicit policy message but which moved millions to understand the challenges domestic workers face.

A good society is about the values we want to live by and the relationships we want to have. The fight against inequality is at root a struggle for dignity: social and economic exclusion break the lives of the poor and dehumanize the rich, so in fighting for a more equal world we are working to heal society. The fight against inequality is beautiful, not just rational.

Policies to tackle climate change are also those that help fight inequality, including massive investment in public transport and public infrastructure to generate millions of quality jobs, create common assets and services, improve public health, and foster the collective experience that comes when people use services together. The tired debate about ‘people versus the environment’ is over; we know what a ‘just transition’ looks like.

The conversation on overcoming inequality is the most exciting we’ve had in a generation. We’re not suffering from a dearth of ideas. The key challenge is make them happen. Policy-making is not working for ordinary people because power has been captured by elites; we need to claim it back.

Amidst the tragedy and trauma of the Covid-19 crisis, history provides many reasons for hope. It also helps to guide us on how to realise that hope. The current worldwide wave of protests shows that people are ready to get into “good trouble” as the late John Lewis put it. We have an opportunity to build power anew, and create a new story. As before, we can win the fight against inequality together.

Blog: The most important meeting you’ve never heard of — and the grand challenge on inequality
Last month 195 world leaders once again met in New York for big speeches and grand events. But on inequality, when all is said and done, more has been...
Article: World protests show rising outrage and mounting discontent
Despite the coronvirus pandemic, we are experiencing a continuation of rising outrage and street protests throughout the world. Governments need to listen...
Blog: Citizen action is central to the global response to COVID-19
Now is the time for citizens to ensure that world leaders forcefully respond to the COVID-19 crisis in accordance with human rights, write Isabel Ortiz...
News: "End the age of greed": Davos week of action 19-26th January
Members of the Fight Inequality Alliance will from January 19th to 26th, mobilise across the world to highlight the crisis of rising inequality and demand...
Report: Heralding Article 25: A people's strategy for world transformation
After so many years of political inaction only the massed goodwill of ordinary people can bring about an end to poverty in a world of plenty through...
Printer-friendly version