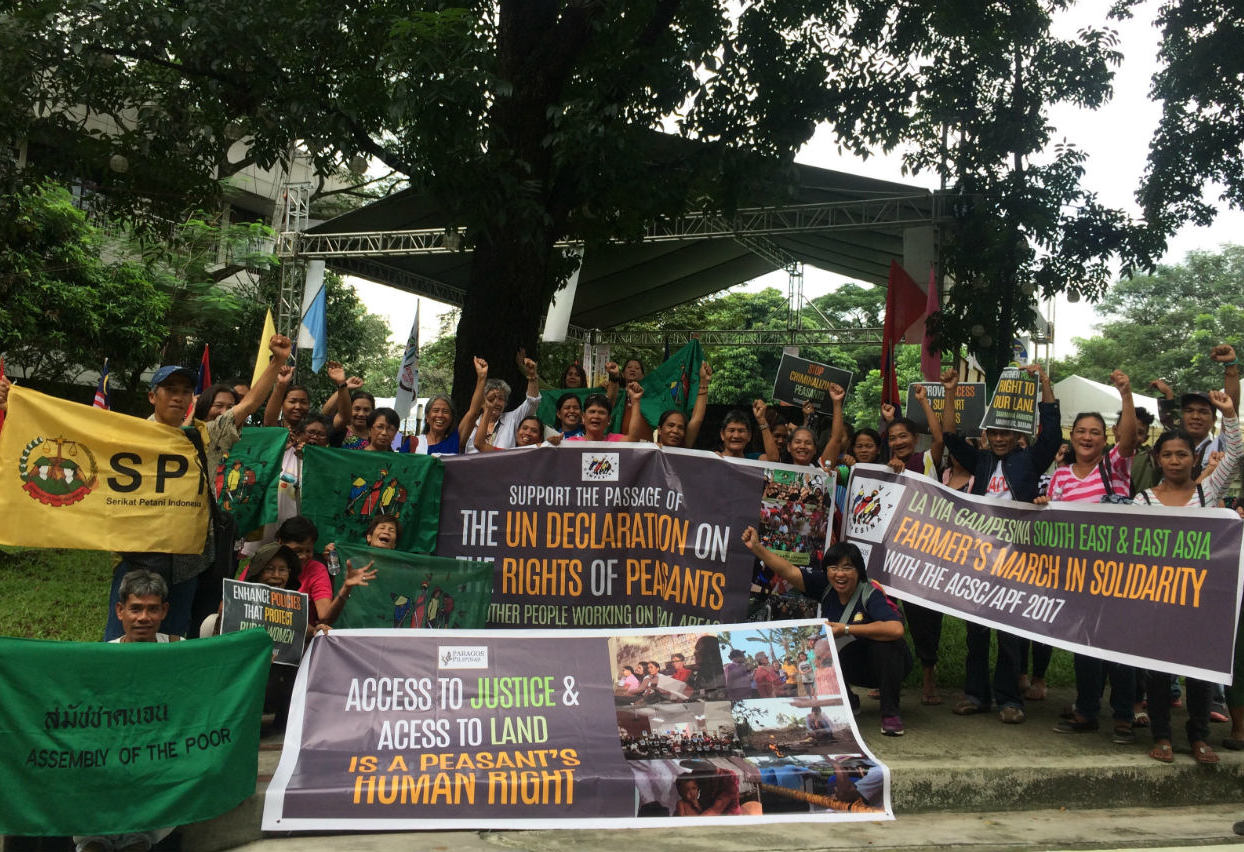 Seventy percent of the world’s population is fed by small-scale producers. These producers, however, face an onslaught of threats related to economic globalisation. By Jackie Smith, Caitlin Schroering for Common Dreams.

Later this month, the United Nations General Assembly is expected to pass a new Declaration on the Rights of Peasants and other People Working in Rural Areas, following more than a decade of work by La Via Campesina, or “the peasant’s way” and other social movements. Via Campesina came together in the early 1990s to address the problems economic globalization brought for small-scale farmers. Today, it represents around 300 million small farmers across five continents. The UN Declaration reflects an important—arguably revolutionary—development in international human rights law. It seeks to protect the rights of rural populations, and also has implications for the fight against climate change and for the protection of biodiversity(See Via Campesina).

Economic globalization policies have forced local food producers to compete in a hyper-competitive global marketplace dominated by large industrial producers. These large-scale agribusinesses benefit from generous subsidies and favorable regulations from the US and European governments, which routinely ignore the same global trade rules they impose on poor countries.

Small farmers are also ensnared by global regulations on intellectual property that favor large corporations. The seeds used to grow major food crops have, as a result, been increasingly turned into lucrative commodities by monopolistic companies like Monsanto, which hold patents on their genetic codes and control hugely disproportionate shares of global markets (seeAgropoly: a Handful of Corporations Control World Food Production). This has produced the absurd situation where Indian farmers—whose ancestors developed the basmati rice with which we are all familiar—saw their right to save seed from this traditional crop challenged by US company, Texmati, which obtained a patent on a strain of the rice. It is traditional practice for farmers to save seeds and select for preferred crop qualities; this has been undermined by international patent law, which enables companies like Monsanto to control food markets and demand that farmers purchase their patented seed each season.

Globalization has fueled competition for land and resources, generating another serious threat to rural livelihoods known as “land grabs.”  From Indonesia to Brazil, small farmers are losing access to their traditional lands as large agribusinesses, often working with national governments, forcibly evict them in order to produce monoculture export crops such as palm oil. According to Via Campesina, there are at least a million land grab violations occurring today. Mining is yet another threat to rural producers and the environment, and globalization has intensified conflicts between communities and companies engaged in resource extraction.

“Small-scale” producers—including peasants, fishers, pastoralists and others—are crucial to feeding the world’s people. In fact, 70% of the world’s population is fed by small-scale producers. These producers, however, face an onslaught of threats related to economic globalization as it currently stands. Further, climate change and other environmental pollution seriously threaten food production in many regions. Coupled with the current global migration crisis, acknowledging and enforcing the human rights of rural peoples becomes even more imperative (Via Campesina). The Declaration gives rural peoples more legal tools with which to challenge the operations of multinational corporations.

The Declaration on the Rights of Peasants significantly advances internationally recognized human rights. It validates and reinforces prior precedents in human rights law, and it also lays a foundation for future precedents that would: advance collective and cultural rights; provide legal support for peasants’ claims against transnational corporations; redefine food as something more than a commodity; advance legal recognition of people’s rights to a healthy environment; promote gender equity; and prioritize human rights over economic claims (Earth Institute). The Declaration also defends the right to the protection of traditional knowledge relevant to plant genetic resources for food and agriculture and the equitable enjoyment of the benefits of technology—including genetic research (IP Watch).

The Declaration’s explicit recognition of “food sovereignty” represents a critical advancement for the human rights of all people. This radical framing of the rights of rural producers to determine what and how they produce helps ensure the health of the environment as well as people and cultures. This affects both farmers and the urban consumers who depend upon them. According to the UN Food and Agriculture Organization (FAO), “The Declaration makes specific reference to the right to adequate food, land, water, pastoralism, and agroecology. It also upholds the need to respect the cultural identity and traditional knowledge of rural people as well as the need to provide social protection and to ensure gender equality in rural areas.” The FAO supports the Declaration as a critical step for helping realize international commitments in the Sustainable Development Goals, including commitments to ending hunger and extreme poverty.

As with other rights, the vision and potential of the Peasant Rights Declaration will only be realized if people organize to claim these rights and to implement them in national and local institutions. Human rights don’t “trickle down”—they rise up! For the sake of small farmers and for the world’s growing urban population, we must encourage advocates and lawyers to engage their “legal and political imaginations” and make references to the Declaration in their work. This will help strengthen the legal precedents set out in the Declaration. We must also support Via Campesina’s efforts to reinforce the Declaration with a formal international treaty that will provide enforceable guarantees for human rights.

The history of international human rights law is replete with high-sounding language and statements of commitment that are too-often ignored by elites or dismissed by progressives as “unrealistic” or “utopian.” But the long view shows that it is regular people who have struggled throughout human history to demand and achieve “unreasonable demands.” Efforts to achieve a world where people matter and where basic human rights and dignity are respected have and continue to cost lives of people struggling to survive and thrive. People in the United States and other rich countries must work to promote awareness of the Declaration and push their governments to support it.

Report: Struggles of La Vía Campesina for agrarian reform and the defense of life, land and territories
On ‘Food Sovereignty Day’ La Via Campesina launches publication that calls for a massive change in the current agro-food systems
Article: Seeds of corporate power vs farmers' rights
The expansion of corporate control in agriculture is reflected in three international treaties that establish the global rights of various stakeholders to...
Report: Our food systems are collapsing and the alternative of agroecology has become a survival imperative
Dr. Vandana Shiva presents in the report The Future of Our Daily Bread: Regeneration or Collapse new evidence on the imminent collapse of our food systems...
Report: Global food system is broken, say world’s science academies
The global food system is broken, leaving billions of people either underfed or overweight and driving the planet towards climate catastrophe, according...
Printer-friendly version