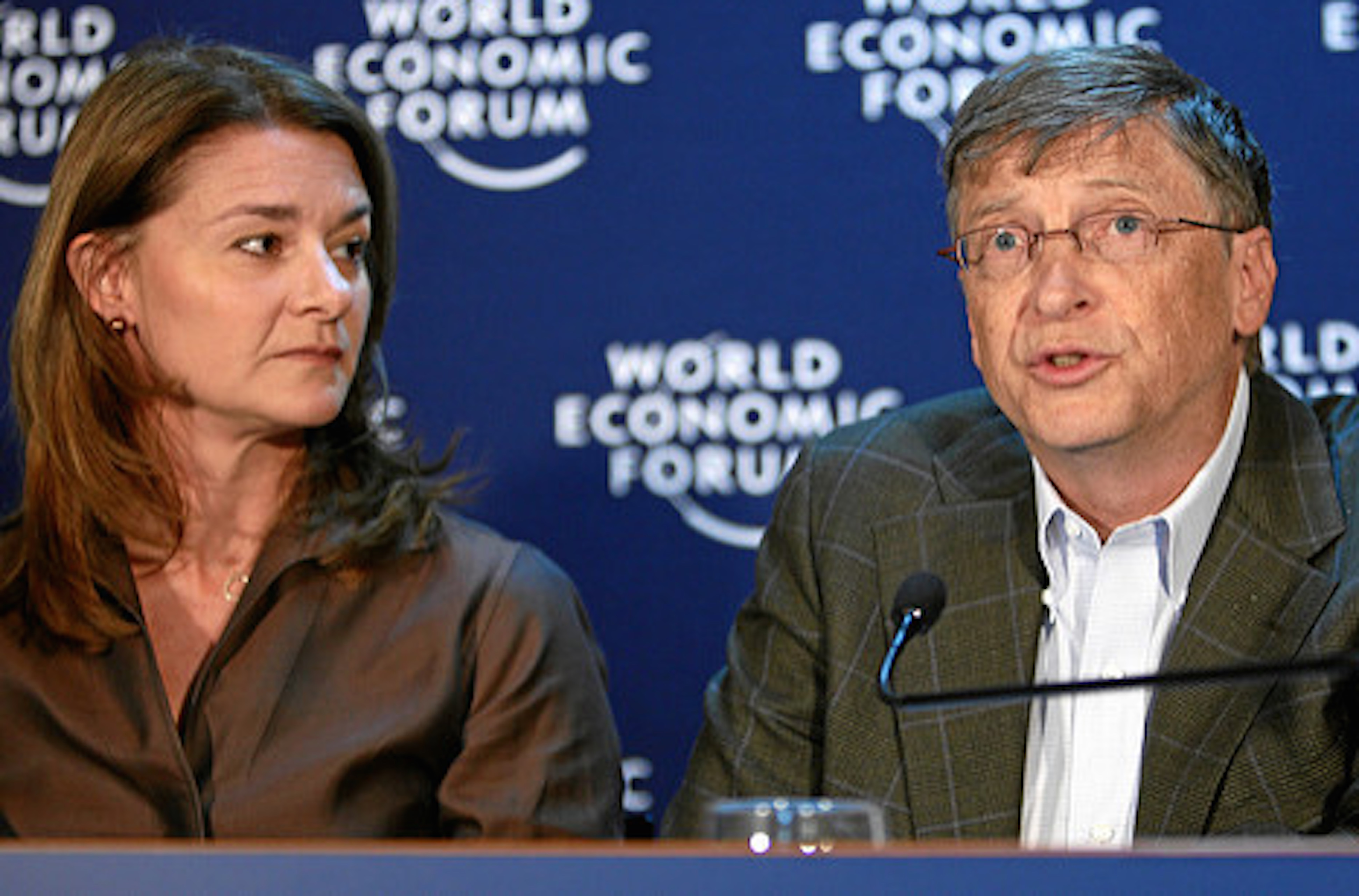 For all its candor and color, here is what the annual Gates letter doesn’t tell you: that our global economic system is designed in such a way as to channel our planet’s wealth into the hands of a tiny elite. And changing that system at its root would require those with power to dismantle the very machine that created their privilege, writes Martin Kirk and Jason Hickel.

The annual public letter from Bill and Melinda Gates has become a much-celebrated event in the global development calendar. But lost in the excitement around this year’s letter is the fact that it uses 6,000 words to paint a picture that is so selective in its use of facts that it amounts to little more than propaganda for a failing industry, and indeed a failing ideology.

And the 2017 letter is especially striking for just how out-of-sync it feels with the zeitgeist. The Gates’ used their letter to respond to Warren Buffett, who in 2006 gave a staggering $44 billion to the Gates Foundation – the largest charitable gift of all time. Ten years later, he asked them to reflect on what they had done with it.

The couple selected a handful of positive global trends and claimed them all for the foundation. They do not distinguish the achievements of rich philanthropists and donor agencies from the achievements of all the governments, U.N. bodies, multilateral institutions, businesses and social movements that are devoted to global development. More importantly, they fail to offer a single critical reflection on the work they have done.

This isn’t transparent, accountable philanthropy. This is the world’s most powerful foundation cherry-picking data to fit a good-news narrative to generate a sense of optimism they feel is sorely lacking. Indeed, the letter more or less boils down to a single claim: “The world has been getting better over the past 25 years, and as long as we keep doing more of the same, it will continue to get better. Trust us.”

There are two big problems with the letter. First, some of their examples are just wrong. Second are errors of omission. There’s a lot they just don’t talk about. A prime example of the former is their headline claim that poverty has been cut by half since 1990. They use figures based on a $1.25 a day poverty line, but there is a strong scholarly consensus that this line is far too low. A more accurate poverty line is $5 per day, which, even the U.N. Agency for Trade and Development suggests this is the bare minimum necessary for people to get adequate food to eat and to stand a chance of reaching normal life expectancy.

Global poverty measured at this level hasn’t been falling. In fact, it has been increasing – dramatically – over the past 25 years. Today, more than 4 billion people live below this minimum threshold. That’s nearly two-thirds of the world’s population. The Gates’ would be wise to reflect on this fact, for it is a clear sign that the development industry is failing at its main objective.

Why is development failing? This brings us to what the Gates’ letter omits. The letter focuses so unwaveringly on foreign aid that you’d be forgiven for believing that charity is all that’s needed to address poverty. We hear nothing of the systemic forces that drive poverty and inequality in the first place, such as – to name just two relevant examples – tax evasion and avoidance, and intellectual property rights. Poorer countries lose in excess of $1 trillion per year to illicit financial flows. An estimated 83 % of this is siphoned away through a practice called trade mis-invoicing, whereby companies deliberately misrepresent the prices of traded goods in order to spirit money into offshore secrecy jurisdictions, usually to avoid paying taxes. These illicit flows outstrip annual aid contributions by a factor of seven.

Even when money may be being moved legally, the extensive use of tax havens by most multinational corporations adds another layer of extraction through technically legal but morally offensive tax avoidance. Microsoft, for example, currently has around $108 billion in offshore accounts. This is the sort of money that the former chair of the U.K. Financial Services Authority, Adair Turner, calls “socially useless”:  It has been removed from general circulation to protect it from taxation, which means it doesn’t contribute its fair share to the general pot for education, health-care, infrastructure, or even the foreign aid the Gates’ say they want more of.

Then, there is the omission of intellectual property rights. This is extraordinary given the vital role they play in enabling poor countries to climb out of poverty. Intellectual property rules are set and managed through a trade agreement called TRIPS: Trade Related Aspects of Intellectual Property Rights. Large U.S. companies, such as Microsoft – under Bill Gates’ chairmanship – lobbied hard for this agreement as they make 60% of their profits from licensing and patents. When TRIPS came into force, it forced developing countries to spend an extra $60 billion per year in additional patent licensing fees, to access technologies and medicines that are essential for development. $60 billion is half of all foreign aid and about 15 times more than the Gates Foundation distributes.

Most striking of all, climate change doesn’t get a mention in the 2017 letter. We know that climate change is caused almost entirely by historical emissions from rich countries, but its impact is overwhelmingly felt in poor countries. It is already costing developing countries around $570 billion a year in damages and lost revenues. And it is set to get much worse in the coming years. The U.N. calls it, “a major and growing threat to global food security” that could push 122 million more people into extreme poverty by 2030, Most politicians have now admitted is one of the most serious threats we face. It is remarkable that it gets such short shrift by the Gates’.

For all its candor and color, here, in black and white, is what the annual letter doesn’t tell you: that our global economic system is designed in such a way as to channel our planet’s wealth into the hands of a tiny elite. The proof? The eight richest men in the world – of whom Bill Gates is one, even after donating $30 billion to the foundation – have more personal wealth than the poorest half of the world’s population combined.

Changing that system at its root – by stopping illicit financial flows, shutting down tax havens, creating a fairer trade system, battling climate change and helping to build resilient local economies and communities – would require those with power and wealth to dismantle the very machine that created their privilege. That sounds unattainable but if the Greek roots of the word philanthropy literally mean for “the love of humanity” surely such drastic change that would benefit people and planet is the point?

This critique of the Gates’ letter shouldn’t detract from the fact that there has been considerable progress in human development in recent years. Illiteracy, child mortality, access to family planning services have been heading in the right direction. The Gates Foundation has undoubtedly made some valuable contributions to this work, particularly in the area of vaccines, and that should be acknowledged and celebrated. But to tell such a reductive, self-aggrandizing story isn’t optimism, it’s deception. It is false to think that we can get lasting change by only speaking of what alleviates some of the worst suffering while ignoring almost everything that causes it. It is also disingenuous to claim that poverty can be eradicated with more charity and foreign aid.  Yes, the world needs good news but not at the expense of real change.

Blog: 'Good news' claiming 'falling global poverty' isn't news at all
Is poverty really on the decline across the world, as widely reported by the World Bank and United Nations? This ‘good news’ narrative is far from the...
Blog: Are we moving towards a ‘world free of poverty’?
There are reasons to question the World Bank's upbeat estimate of global poverty, especially if non-income dimensions are considered. If we adopt a truly...
Article: Politically-filtered views on progress against poverty
The policy interpretations given by some critics of the World Bank's global poverty data are yet another form of their own political filtering. Some...
Printer-friendly version