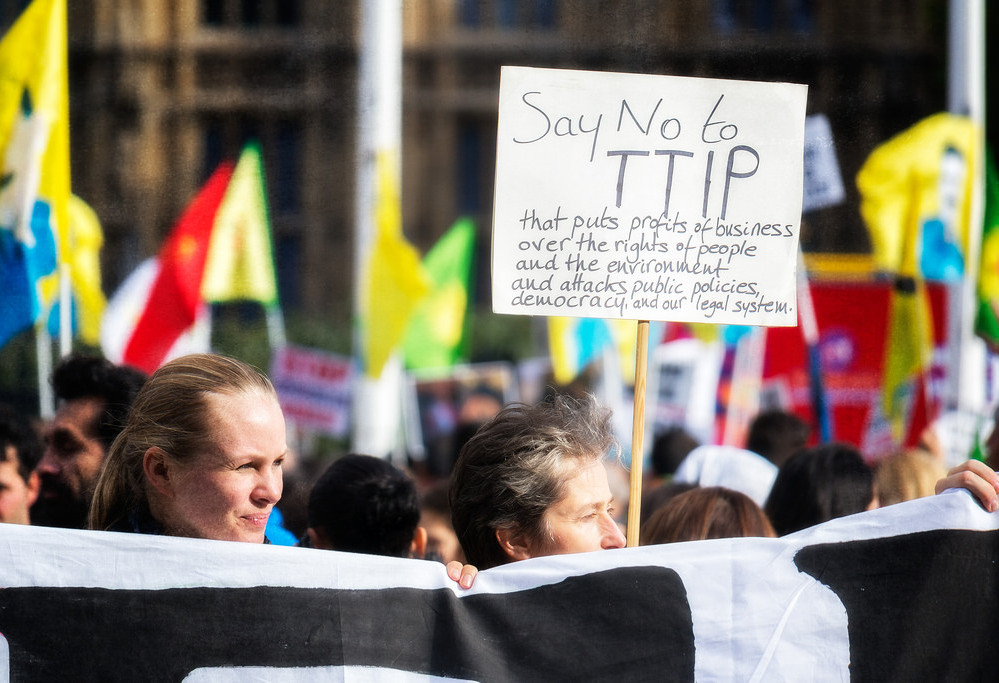 The STWR report ‘Sharing as our common cause’ explains how a call for sharing is consistently at the heart of civil society demands for a better world, even though this mutual concern is generally understood and couched in tacit terms.

As part of STWR’s ‘global call for sharing’ campaign, it is therefore useful to highlight how recent protest or campaigning activity is invariably focused on the need to share wealth, power and resources more fairly and sustainably, especially in relation to grassroots mobilisations for social and economic justice. In this light, the massive demonstrations in many countries against harsh austerity measures are implicitly concerned with how resources are shared throughout society, most obviously in relation to how a nation’s finances are pooled and redistributed to maintain public services such as education and national healthcare.

Thousands of people are continuing to march in protest against crippling government cutbacks to these services, while the interests of corporations and rich individuals are favoured at the expense of ordinary citizens. The basic injustice of these flawed policies are now commonly hailed by anti-austerity movements the world over, as recently embodied in the growing Printemps 2015 movement in Quebec, the “Dignity” mobilisations in Madrid, and the recent protest rallies in Montreal, Brussels and many other cities.

Often, the demand for sharing is almost palpable in calls for improving the state provision of social protection, as exemplified in an excellent piece by Dave Lindorff about ‘taking it to the streets (and voting booth) to demand Medicare for all and Social Security that all Americans can live on’. With Republicans now controlling both houses of Congress and President Obama outwardly supporting cuts to these two critical funding programs, Lindorff makes the case for massive grassroots organising to not only defend these programs but also demand they are significantly expanded.

And the only way to do this, Lindorff argues, is to stop shielding corporations and the wealthy from contributing their fair share. He concludes: “Washington needs to be regularly clogged with masses of demonstrators demanding ‘Medicare for all’ and ‘Real Social Security people can live on.’ Furthermore, no candidate of either party who opposes single-payer healthcare and a doubling of Social Security benefits through higher taxes on the rich should receive a single vote in future national elections!”

If commercialisation is the antithesis of sharing, then the renaissance in student protests is another case in point that demonstrates the growing demand for fairness and sanity in how resources are distributed. Academics and students across the world are taking part in strikes and occupations that are protesting against the corporatisation of education, many under the banner of The Free University movement. At the London School of Economics, for example, students describe their institution as “the epitome of the neoliberal university”, one that is managed and organised around corporate interests which promote elitism and perpetuate inequality. Through Occupy LSE, they propose that students, lecturers and workers should run their own university – a project they’ve named the Free University of London. Similarly in Canada, Amsterdam, Italy and across the UK and US, students are calling for free tuition and an end to the corporate domination of education, in which profit-making and efficiency is prioritised rather than creativity, critical thinking and a higher education that is accessible to all.

As pointed out by Josh Hoxie of the Institute for Policy Studies, the idea that students should be able to attend university without taking on mountainous levels of debt or bankrupting their families is hardly revolutionary. The cost of covering tuition for all students at public colleges and universities in America is also surprisingly low – and could easily be funded by cutting government subsidies to the for-profit college industry and re-arranging education spending. Hoxie argues that tuition costs could be fully met by a more robust estate tax (a levy on the wealth multimillionaires leave to their heirs), which would also rein in or roll back the rising concentration of wealth across the country. Far from pursuing such redistributive tax policies on behalf of the common good, however, the United States House of Representatives is pushing to repeal the existing estate tax passed in 1916 – thus further accelerating inequality and hurting lower- and middle-class Americans.

At the World Social Forum in Tunis held at the end of March, the call for a more equal society – based on a fairer sharing of wealth and power – was central to discussions and protest activity where thousands of people had gathered from 120 countries to proclaim that “another world is possible”. On the eve of the Forum’s 10th global meeting, a joint call was released by an alliance of well-known international civil society organisations (including ActionAid, Greenpeace, Oxfam and Civicus) that effectively summarised the case for sharing by identifying growing economic inequalities between and within countries as a central cause of global poverty, environmental degradation and social injustice.

The hard-hitting statement of intent from NGO leaders calls for a new approach to development that goes “beyond tinkering” to address the “structural causes of inequality”, in which social movements and the poor are bolstered in their efforts to hold the powerful 1% to account. Pledging to fight for redistributive policies to reverse inequality, the NGOs also commit themselves to “press governments to tackle tax dodging, ensure progressive taxes, provide universal free public health and education services, support workers’ bargaining power, and narrow the gap between rich and poor.”

During the five-day event, 70,000 delegates from more than 4,000 organisations discussed a wide range of critical issues and causes that reflect the global call for sharing, including the interlinked struggles to protect the environmental commons, end poverty and marginalisation, democratise global governance and reform the corrupt global financial system. The Tax Justice Convergence Assembly, for example, took aim at the world’s governments that “continue to invent new tax incentives for multinational corporations and wealthy individuals as part of a global race-to-the bottom”, while “rigged global tax rules fail to protect the tax bases of the world’s poorest nations against erosion driven by international tax dodging”. Reaffirming a broad list of demands agreed at the previous WSF in 2013, the Global Alliance for Tax Justice called for progressive tax policies to tackle inequality within countries, and new international tax rules that make multinational corporations pay their fair share.

In its final declaration, the Assembly of Social Movements also put the spotlight on the neoliberal policies that have “massive impacts both on the Southern and the Northern countries and contribute to an increase in migration, forced displacement, evictions, debt, and social inequalities.” Spelling out the need to create “alternatives for a socially just development that respects nature”, the declaration asserts the commitment of WSF delegates to fight for the cancellation of illegitimate and odious debts, and push for an alternative to the myriad free trade agreements that are imposed by states and transnational corporations. Echoing the roots of the WSF following the ‘Battle of Seattle’ in 1999, it also affirms “that it is possible to build another kind of globalization, made by and for the people, based on solidarity and on freedom of movement for all human beings.”

A key battle for those who seek a fairer world is the fight against trade and investment deals that are currently being negotiated behind closed doors, particularly the Transatlantic Trade and Investment Partnership (TTIP), the Canada EU Trade Agreement (CETA), the Trade in Services Agreement (TISA) and the Trans Pacific Partnership (TPP). On Saturday, campaigners and concerned citizens from across the world gathered together in one of the largest collection of protests to date against these emerging free trade agreements, all of which pose a major threat to our environment and human rights. Hundreds of demonstrations took place worldwide – primarily in Europe and the US – in opposition to this attempt to re-engineer the global economy in the interests of powerful corporations at the public’s expense.

Although the “trojan horse” treaties vary in many complex ways, they could reverse decades of progress towards better protection for citizens and the environment. Campaigners warn that the governing principle behind the agreements is that of extending the reach of the market, giving big business unprecedented power over our societies and potentially opening the door to an aggressive corporate take-over of our common resources and public services. As STWR have commented previously, it will remain impossible to conceive of a new economic paradigm based on sharing rather than competing for the world’s resources, so long as these rigged treaties are promoted by our elected leaders no matter what the cost in terms of poverty, inequality and environmental destruction. Yet opposition to the corporate trade pacts is increasing exponentially, and this latest Global Day of Action demonstrates how a growing call for sharing the world’s resources (however implicitly expressed) is fast becoming a potent force for change on the international stage.

There are of course many other popular demands for social and economic justice that intrinsically embody the principle of sharing, many of which are hitting newspaper headlines recently – such as the Fight for 15 workers movement that held more than 230 protests across the US last week. We’ll continue to highlight these grassroots calls for economic sharing in future editorials and commentaries, along with an upcoming focus on the debate around sharing that is increasingly prominent in policy discussions on environmental stewardship and tackling global poverty.

For regular sharing-related links of the above nature you can visit STWR’s twitter and facebook pages, as well as a new scoop.it! page on ‘what we’re reading’. If you see that we’ve missed anything pertinent or you know of any sharing-related issues that we haven’t mentioned, please drop us a line at info@stwr.org. You can also sign up to our newsletter on the homepage if you’d like to receive regular updates in your email inbox about what we’re doing at STWR. To learn more about STWR’s campaign or add your name to the ‘global call for sharing’, please visit: www.sharing.org/global-call