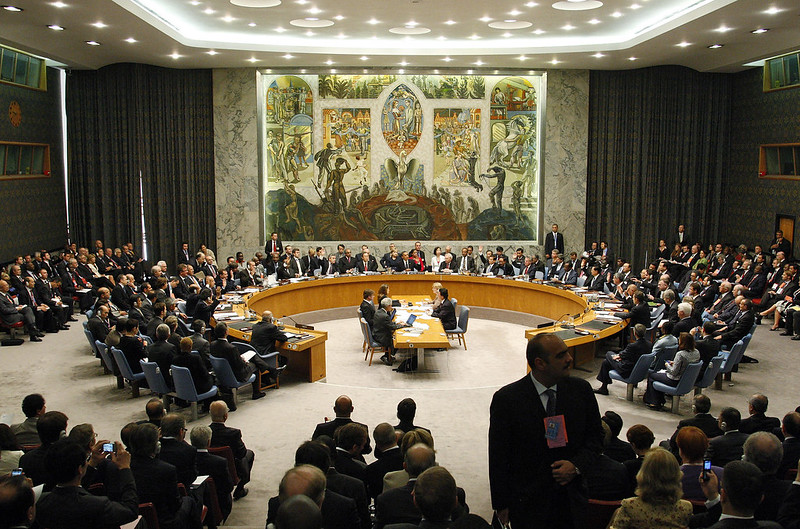 The only way forward for the United Nations is to acknowledge the key difference between 1945 and 2020 - decolonization - and abolish the permanent members of the Security Council altogether. By Hannah Ryder, Anna Baisch, Ovigwe Eguegu for Foreign Policy.

This year, as the effects of COVID-19 continue to be felt around the world, leaders are preparing to meet virtually to mark 75 years of the United Nations: its “diamond” anniversary. But 2020 has brought into focus some sharp issues around the U.N.’s effectiveness, including its largest donor, the United States, pulling funds from the World Health Organization (WHO).

There were mounting problems in the U.N. prior to this. The U.N. and its agencies are constantly fighting for new money to cover escalating costs of various missions such as on health, education, and peacekeeping, despite global improvements in poverty. In terms of maintaining peace and security—the U.N.’s record has been dismal—from dithering over apartheid in South Africa, to Iraq, Rwanda, Yemen, the 2008 financial crisis, and now, COVID-19.

The typical responses to the U.N.’s failure have been to enlarge the P5, the five permanent members of the Security Council who represent the chief victors of World War II. Bring in other global powers such as India or Turkey. Move around the representational seats and create new categories. Create more seats for Africa. Dilute the veto power exercised by the P5.

But all of these measures are tinkering. None are adequate. The only way forward is to acknowledge the key difference between 1945 and 2020, decolonization, and abolish the permanent members of the Security Council altogether. Here’s why and how.

The roots of the U.N. are deeply colonial. Back in 1945 four out of the five members of the P5 were colonial states. Over the 75 years of the U.N.’s existence, 80 former colonies have gained independence, from India to Kenya, to Nigeria and Kazakhstan.

And within these groups, the big countries almost always win. Japan has spent 22 years on the Security Council. Brazil 20 years. Within African countries, only Nigeria, with 10 years, comes close.

This poorly distributed allocation is reflected in other parts of the U.N.—in particular the secretary-general position itself. Since 1945, four out of the nine secretaries-general have been white European men. There has never been a Muslim secretary-general.

U.N. leaders have sought to address this by diversifying heads of agencies or undersecretaries-general, but individuals are not the answer. Take COVID-19. Despite an Ethiopian head of the WHO, who might be expected to advocate for the poorest countries in the world, the only resolution the P5-led Security Council has unanimously adopted referring to COVID-19 this year is resolution 2532—supporting a call made by the secretary-general in March for a global cease-fire to focus on efforts to fight COVID-19.

This is important but hardly influential, and it’s largely irrelevant to the thousands of people who have since died prematurely due to lax COVID-19 responses and lack of international finance to manage the impacts of required lockdowns in the poorest countries. Instead, African leaders have turned closer to the African Union’s Africa Centres for Disease Control and Prevention for COVID-19 advice, and to the unrepresentative yet powerful G-20 and IMF for financial support, not the U.N.

Why does this distribution matter? The shift in postcolonial (and post-Cold War) membership is essentially the U.N.’s only major shift in composition in 75 years.

Contrary to what many observers—especially economists like ourselves—might have us believe, there has not been a great economic rebalancing. Our calculations suggest—again including former colonies—that the P5’s share of global GDP in 1940 was around 47 percent. Today, the P5 accounts for just 2 percentage points more of GDP—49 percent of the global total.

Yes, China’s economic rise within the P5 has been notable—in fact, doubling in economic importance from accounting for 14 percent to 33 percent of the P5’s total wealth. But for the rest of the world, their economic relationship with the P5 has hardly changed over the U.N.’s 75 years. Global economics and the U.N. structure remain rooted in the power structures of 1945, despite the political independence.

Has the P5’s U.N. status helped to maintain economic imperialism, or has their economic might helped them to maintain their powerful U.N. positions? In some ways it is only the correlation that matters. The U.N.’s structural inability to compel the P5 countries themselves to act decisively for the greater good is often acknowledged as a key justification for change, but this is often countered with economic arguments that we are all better off now. This counter does not hold water. The P5’s failure to distribute economic benefits to the rest of the world despite decolonization is also a structural problem that justifies change.

The answer lies in the geopolitical ideals leaders set out back in 1945. The Security Council was conceived on a basis of responsibility and capacity of working collaboratively, rather than on the principle of representation. At that time, after emerging from World War II and meeting in San Francisco, the leaders of the P5 felt themselves to be responsible and capable, despite their colonial pursuits.

While the economics might be the same, the potential member states that might be deemed responsible or capable in 2020 are very different to those in 1945. And they will likely be different in 2030, 2045, or another 75 years ahead. With climate change, it’s likely that our global crises will only become more complex over the next 75 years.

There is no country in the world that deserves a permanent seat. Veto-based decision-making on behalf of others, as the Security Council does, should be earned, and criteria for responsibility and capability transparently demonstrated and rewarded.

A reimagined structure for a Security Council would see all 15 seats being made temporary, for periods of five years to provide more continuity, with wide, nonregional open competition for each seat, alongside clear, monitored restrictions on lobbying expenses and two-term limits within a cycle of 30 years to reward excellence while avoiding domination.

Such a structure would not be a toothless democratic body like the U.N. General Assembly, where every country has one vote, regardless of its record, wealth, population, or military might, and no country has a veto. Nor would it be an easy and potentially diverse yet unaccountable “coalition of the willing,” nor a supposedly elite and powerful grouping of countries such as the G-7, BRICS, or G-20, subject to groupthink and hiding behind each other.

These 15 countries, just as nonpermanent members have established precedent for doing now, would need to be elected by others—they would need to prove their worth to others. They would need to build allies within the U.N., for instance within their groupings, and campaign to show they are indeed responsible and capable to be trusted to help the world tackle issues from poverty and climate change to pandemics and financial crises. P5 members could thus arguably remain on the council, but they would need to compete and pitch to do so.

While a 15-seat Security Council might initially seem large, a council that aimed to be effective in decision-making while embedding the principle of collaboration would also implement a rule that veto power can only be exercised by two members together—i.e., any country would need to find another supporter to oppose a decision. Preserving the veto would also maintain its distinction from the General Assembly and from the pre-World War II League of Nations, the U.N.’s failed predecessor.

Detractors will immediately contend that the P5 will not accept this. Nor would they submit to decisions made by others. Indeed, some P5 members have remained out of certain U.N.-based mechanisms for this reason. Three out of the five permanent members do not recognize the U.N. General Assembly-endorsed International Criminal Court (ICC) decisions. Yet the ICC has made important contributions to justice for thousands, if not millions of people. The U.N. can and does still play a guardian role, even if P5 members remain outside.

The world cannot take another 75 years of unaccountability and inequality. A reimagined, stronger structure has a chance of creating a more fit-for-purpose and adaptive U.N., ready to face the challenges of the future.

Hannah Ryder is the CEO of Development Reimagined, Senior Associate at the Center for Strategic International Studies Africa Program, and former Head of Policy and Partnerships for UNDP in China.
Anna Baisch is an International relations researcher at Development Reimagined.
Ovigwe Eguegu is a policy advisor at Development Reimagined and columnist for the China Africa Project, specializing in geopolitics, globalization and Africa-China relations.
Original source: Foreign Policy
Image credit: Some rights reserved by United Nations Photo, flickr creative commons
Filed under:
Global governance, War and conflict

Blog: UN75 Declaration calls for multilateralism to achieve equal, resilient world
The High-level Commemoration of the 75th Anniversary of the UN brought together 111 Heads of State and Government and 14 Ministers, who spoke in support...
Article: Global cooperation tested by the pandemic at UNGA 75
The 75th UNGA is a moment for the world to focus on realising the full potential of the United Nations' founding principle of "achieving international...
Article: Is now the moment for a standing UN ‘911’ service?
With a “UN 911” first responder for complex emergencies, the UN would finally have a rapid, reliable capacity to help save millions of lives and trillions...
Article: The key to global security? It’s not just about security
In his 900th column for openDemocracy, Paul Rogers shows how economics and climate demand a new approach to international security.
Article: Want national security? Dismantle the war machine
We need a deep rethinking of how we prioritize and respond to security threats. If we want a healthy Earth, justice, peace, and democracy, we need a 21st-...
News: Read STWR's flagship book: ‘Heralding Article 25’
Share The World’s Resources (STWR) have released a book version of the pioneering publication by Mohammed Sofiane Mesbahi, titled 'Heralding Article 25: A...
Printer-friendly version