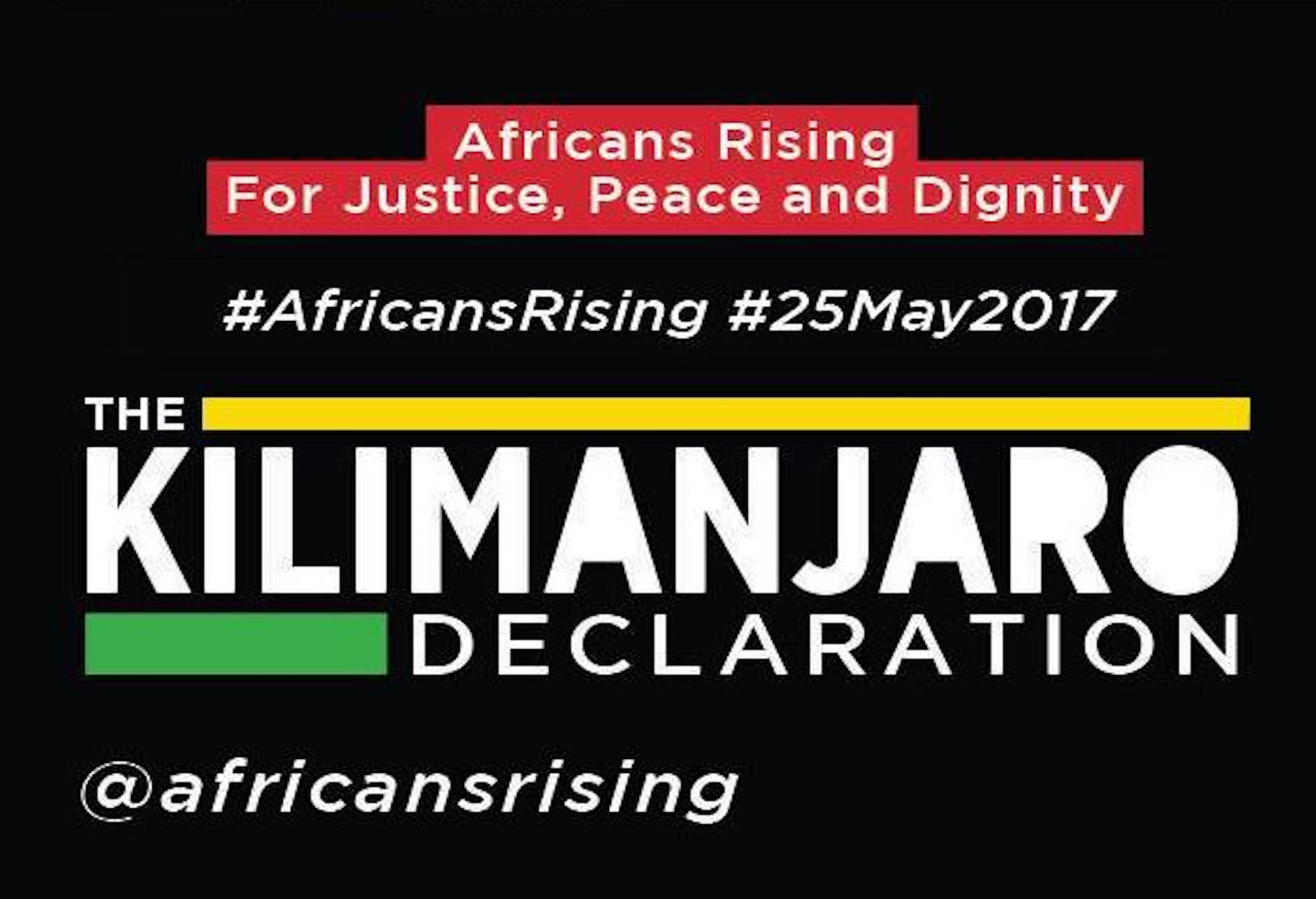 Fed up with ineffective leaders who aren’t dealing with the crises on the continent, people are coming together to launch a pan-African solidarity movement. By Kumi Naidoo.

The expression “Africa rising” was popularised by the Economist and focuses on GDP growth. The growing middle class and major increases in foreign direct investment all pointed to Africa being a prime investment destination and the promised return-on-investment levels that City bankers could only dream of since the collapse of the Asian tigers. But while GDP has been rising across Africa, Africans themselves have been sinking – into deepening inequality, increasing corruption, shrinking civic space and in low lying areas, literally due to climate change.

This is why 272 people from 44 African countries (and the diaspora) founded Africans Rising for Justice, Peace & Dignity, in August last year, out of a deep desire to rewrite the rising narrative. The vision is a decentralised, citizen-owned future. Social inclusion, peace and shared prosperity are the key touch points of this new pan-African movement.

Africa is a rich continent. It has been impoverished by colonialism, slavery and now by new forms of economic injustice. We can’t undo history and the mess that we find ourselves in but we refuse to allow our political and business leaders to blame everything on colonialism. History is not to blame for the human rights violations happening right now, for the gender inequality, for using fossil fuels when we have some of the best conditions for renewable energy. These wrongs are current and Africans Rising is about calling out our leaders on these failures and building a better, more just, more peaceful and sustainable Africa.

On 25 May – commonly know as Africa Day and officially as African Liberation Day – there will be a series of actions and events across the continent to mark the launch of the movement. We chose that day so that we can remind ourselves, our leaders and the world that we are tired of waiting for that liberation to be delivered. And to show them that we are prepared to take action and hold political and business leaders accountable and reinvigorate the journey to that better life for all.

Red is the colour of the launch, primarily to commemorate the blood that was spilt for the freedom of the peoples of Africa (and reminding our leaders that what is asked of them today is much less than what was asked from leaders in our anti-colonial struggles). Secondly, red signifies that Africa is bleeding its wealth on a daily basis through illicit financial outflows. Thirdly, we want to remind all Africans that whatever our beliefs and origins, we all have the same blood and, we have to work together for peace and justice.

Africans Rising is a catalysing movement and the launch will amplify existing struggles. If you are addressing violence against women for instance, you can use #25May2017 to advance your demands or other struggles at local or national level.

On the evening of 25 May, we’re calling on people to switch off their lights between 7pm and 8pm and to light a candle. This is for two reasons. One is to recognise there are still millions of Africans living in absolute energy poverty, which has consequences for education, health and economic activity. Even though Africa is blessed with some of the best renewable energy resources, we have hardly begun to harness these to lift our people out of energy poverty and create decent jobs. Secondly, the candles are a signal to our leaders, who do not have the political courage to lead in the way that we need them to, that we will not allow them to destroy the futures of current and forthcoming generations. At the launch events all over the continent on 25 May, people will read out the Kilimanjaro declaration and pledge that: “We are Africans and we are rising for justice, peace and dignity”.

Young people are at the centre of Africans Rising, and were the majority at the conference in Arusha, Tanzania that gave birth to the movement. We are one of the youngest continents in terms of our demographic profile but we have some of the oldest leaders. If political leaders were honest with themselves many would acknowledge that they’ve been in power for far too long. They’ve run out of fresh ideas. We need to make way for younger people who have new perspectives on the problems facing the world.

We are building pan-African solidarity. When there is a crisis of humanity in Africa, either through manmade or natural disasters, the first people to step forward and offer solidarity often are people from outside the continent. Valued though those expressions of solidarity are by the victims of injustice, this allows our governments to cry imperialism and foreign interference. There are devastating human rights violations happening in many countries including Zimbabwe, Burundi, the Democratic Republic of the Congo, South Sudan, Central African Republic, Cameroon and in my own country, South Africa. While we have a wonderful constitution for which so many people gave their lives, we still see protesting workers killed.

Africans Rising is about deepening solidarity across the continent. We must step up and be the first to speak out against human rights violations. Even though we have not yet formally launched, Africans Rising has already responded to crises with a solidarity mission to the Gambia, after the long-serving president refused to accept electoral defeat and a fact-finding mission to Cameroon to investigate a brutal state crackdown on protests by minority Anglophone communities.

We are committed ethically as well as tactically to peace. The Kilimanjaro declaration explicitly commits us to non-violent means of resisting injustices. But we believe peaceful civil disobedience is the right of citizens when governments refuse to listen or to act in the interests of the people. That doesn’t mean we won’t engage in conventional dialogue with governments. We will, but we won’t do so believing that merely meeting with government is going to deliver the changes we need, quickly enough to improve the lot of our people. We are building a movement that aims to finish the journey of true African liberation, for which so many people laid down their lives in the struggle against colonialism and since. We refuse to accept that all that blood was spilt for the difficult lives people live every day on the continent. The struggle continues!

Kumi Naidoo is the launch director of Africans Rising

Article: Africa: an overview
After decades of famine, grinding poverty, colossal debts and enormous slum-growth, Africa is indisputably the worst casualty of economic globalization....
Article: Africa: key facts and resources
A collection of facts and further resources about economic development in Africa, including organisations, reports and articles.
Article: Unemployment and the free market in Africa
Growing unemployment across sub-Saharan Africa is linked to the free market restructuring of national economies over recent decades. Governments must...
Printer-friendly version